Coinbase and Ivy Koin LLC have recently met with U.S. officials at the U.S. Office of the Comptroller of the Currency (OCC) about obtaining a banking license

In early 2018, Coinbase and Ivy Koin LLC, a payments startup, met with U.S. officials at the U.S. Office of the Comptroller of the Currency (OCC) regarding obtaining a banking license. If either company decides to move forward with getting a bank license, it would open many doors for their businesses but also increase the regulatory scrutiny on them. One positive reason to become a bank is that it would require the firms to only have to deal with one federal regulator instead of individual state regulators for all of the states they operate in, although it would potentially require them to hire more lawyers. Neither company has decided if they will acquire the banking license, but they are both very adamant about following U.S. rules and regulations and to work closely with both state and federal regulators.

“Most fintechs come to us because they have heard of this thing called a national banking charter that gives them pre-emption across state lines,” Comptroller of the Currency Joseph Otting told members of the American Bankers Association trade group in April, referring to the fact that federal banking rules override some state laws. “When they come and they speak to us, and they understand what it really takes to be a bank, they kind of glaze over and often leave skid marks leaving the building.”

One of the big reasons for Coinbase and Ivy Koin acquiring a banking license is that it would be easier to do business with institutions and retail investors with substantial capital to invest. Coinbase took a big step in the right direction earlier this week when they announced their Coinbase Custody service which allows users with at least $10 million to safely trade and store their cryptocurrency with Coinbase.

“We have leveraged our experience safely storing more than $20 billion of cryptocurrency to create Coinbase Custody, the most secure crypto storage solution available,” the firm said.” 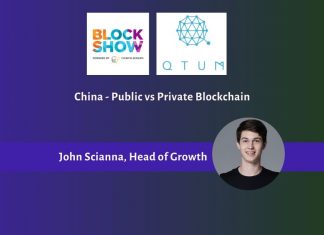 Deepika Garg - November 16, 2019 0
If anything took the center stage at BlockShow Asia 2019, it was China’s u-turn in blockchain space. In an interesting panel discussion, Qtum, Head...