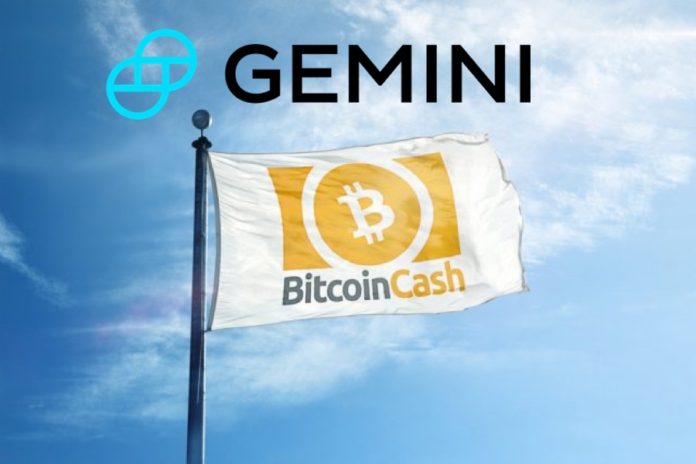 Yesterday, Gemini, the cryptocurrency exchange founded by the Winklevoss twins, announced that it has added support for trading and custody of the ABC variant of Bitcoin Cash (BCH).

Gemini announced the news of the Bitcoin Cash listing yesterday with a post on its official Medium blog. Founded in 2014, Gemini is the brainchild of Cameron and Tyler Winklevoss, the famous investors and early Facebook supporters. It is one of the largest and most used exchanges in the United States.

The listing is a big deal for Bitcoin Cash and its supporters. Especially because of the war that BCH is currently still going on. Bitcoin Cash, which came into existence as a fork of Bitcoin (BTC) on 1 August 2017, was split into two variants recenlty, Bitcoin ABC and Bitcoin SV, as the result of a highly controversial hard fork on 15 November 2018. Both sides have been fighting since then.

Gemini is very selective when it comes to adding currencies to its platform. Therefore, it is even more surprising that Bitcoin Cash got listed, looking at the current war with Bitcoin SV.

The following pairs will all be available on Gemini:

With the listing of Bitcoin Cash and not also the listing of Bitcoin SV, Gemini seems to have picked a side in the Bitcoin Cash fork fiasco. Most crypto exchanges that supported Bitcoin Cash before November 15th are supporting the ABC variant (BCH) and Bitcoin SV (Binance, Poloniex, Bittrex, Kraken, and OKEx). Only a few exchanges (Coinbase, Bitstamp) have decided not to support the SV variant. Gemini can now be added to that list. Gemini clarified the debate:

“At this time, we will only be providing support for the Bitcoin ABC network and we will be referring to it as Bitcoin Cash with ticker: BCH.”

Romel - March 20, 2019 0
CoinMarketCap is launching 2 new indices with the help of Nasdaq, Thomson Reuter, Bloomberg, and Germany's very own Börse Stuttgart, in an effort to...