While in August, a cryptocurrency researcher revealed that Ethereum and EOS combined had only eight decentralized applications (dApps) with more than 300 active users, these numbers seem to be changing quickly. The EOS network has recently seen its amount of unique daily users surge by 500%, helping it reach a 60,000 unique daily user milestone.

Decentralized applications, or DApps as they are better known, have been continually touted as the future of the internet and technology in general. And while more DApps are under development than ever before, with firms throwing millions of dollars and hundreds of hours of manpower at promising projects, this world-changing blockchain-based technology has not seen a fast growth based on active users.

According to a tweet from Ben Sigman, EOS, a decentralized application (DApp) ecosystem, nowadays has a total of 430,000 accounts. This means that despite having seen various governance issues, the popularity of the network keeps rising.

The tweet from Ben Sigman shows a sharp spike in growth of daily active users on the EOS network:

New Record: 60,000 Unique Active Accounts on $EOS today! Just check out the growth in the past 2 weeks. @EOS_io on the rise. @BrendanBlumer pic.twitter.com/6Tsp2qFBe3

There are now more than 430,000 total accounts on the EOS network, as the new blockchain platform gains its footing and begins building out its decentralized application (dApp) ecosystem. Of these dApps, some are beginning to see daily active users in the thousands.

Since the launch of the #EOS public blockchain, it has been exciting to see a growing ecosystem of blockchain-based applications #BuiltOnEOSIO. Got a project you'd like to share with us? Email us at [email protected] pic.twitter.com/1VcNng3MXs

The statistics are remarkable, considering the news in August that the Ethereum and EOS blockchains collectively hosted only eight DApps actively utilized by more than 300 users. This as shown in a tweet from Kevin Rooke, a Canadian cryptocurrency analyst/researcher:

EOS is currently trading at $5.39 with a market cap of $4.8 billion, making it the 5th largest coin on CoinMarketCap. 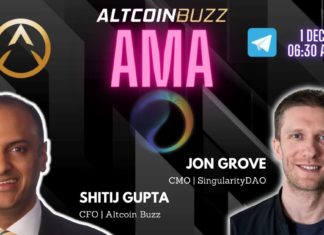 David Abel - December 5, 2021 0
SingularityDAO is a decentralized blockchain-based organization focused on simplifying the ease of accessing a crypto economy. The CFO of Altcoin Buzz, Shitij Gupta, anchored the SingularityDAO...

Teenagers Can Now Own Crypto with Bitsa Young