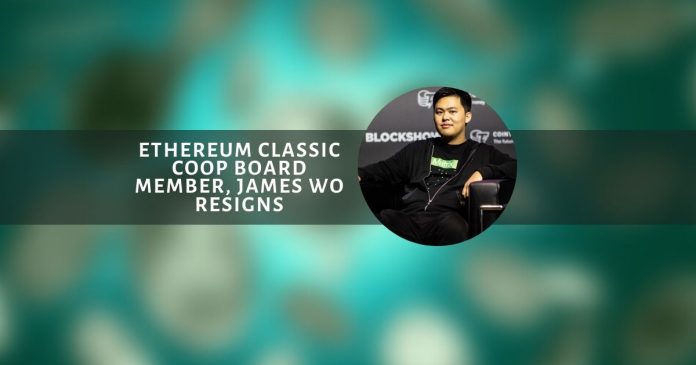 James Wo tendered his resignation from the Ethereum Classic (ETC) cooperative board on Tuesday following differences with the executive director, Bob Summerwill.

Wo claimed that unresolvable differences and general mismanagement of funds by the cooperative executive director, Bob Summerwill, to be the reason for his resignation. In line with the resignation, he has also withdrawn his financial support to Ethereum Classic Collective (ECC).

ECC is a crypto-research foundation solely focused on facilitating the advancement of Ethereum Classic (ETC).

In a statement, explaining his decision, Wo said, “the executive director, Bob Summerwill, lacks the integrity and judgment needed to build the organization”. Hence, he asserted to have made the decision to resign from the board.

Wo is also the founder of Ethereum Classic Lab (ECL), another research organization for ETC. He, alongside Barry Silbert, CEO of Digital Currency Group, and Cody Burns, blockchain architecture manager at Accenture, had been members of ECC.

Wo’s resignation announcement came a few hours following the slash of the ETC miner subsidy from 4 to 3.12 ETC per block.

#EthereumClassic Block rewards are reduced from 4 to 3.2!

Chao Du, an ETC community member, pointed out that Wo would be sorely missed at ECC. Wo had been pivotal in garnering support for ETC in Asia, he added.

More on the allegations

Elaborating on Summerwill’s incompetence, Wo also accused him of excessive bias and inability to achieve even a basic goal like ECC fund expansion. Emphasizing his interest in seeking personal goals at the organization expense, Wo mentioned there was a categorical lack of transparency.

While the budget, operations, and programs suffered, funds were getting diverted to Summerwill’s pet projects with obscure values, Wo alleged. He gave the example of Summerwill’s persistent clamor for a shift from Ethhash to SHA3, a move that is yet to reach community consensus. Moreover, Wo claimed that he did not get any financial report from the executive director, except Form 990 from 2018.

In response to the allegations leveled against him, Summerwill didn’t make any direct response. Instead, he sent a release on the ECC’s Annual General Meeting, which took place on Tuesday.

The release listed the BITKIO CEO, Roy Zou, the Blockchain engineer, Elaine Ou, and the Grayscale legal director, Craig Salm, as members of the board of directors. It also named Salm as chair of the board.

Summerwill went on to state that pursuant to joining ETC Coop as executive director, his fundamental responsibility was to “design and put in place a new governance structure for the ETC Coop”.

Speaking on his decision to quit, Wo had earlier affirmed, “I don’t make this decision lightly. I respect Bob’s experience”. However, the poor leadership qualities of Summerwill left him with no choice but to exit the organization, he said. He further expressed his opinion that “The Coop needs an experienced and professional leader who can collaborate with others”.

ETC had recently been in the news in January when it executed hardfork to Agharta. 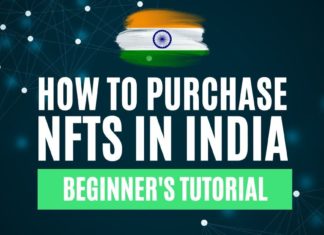 How to Purchase NFTs in India

Ruma - August 31, 2022 0
India is a country known for its rich culture and heritage. Multiple art styles have emerged over the years. Most of them have maintained...