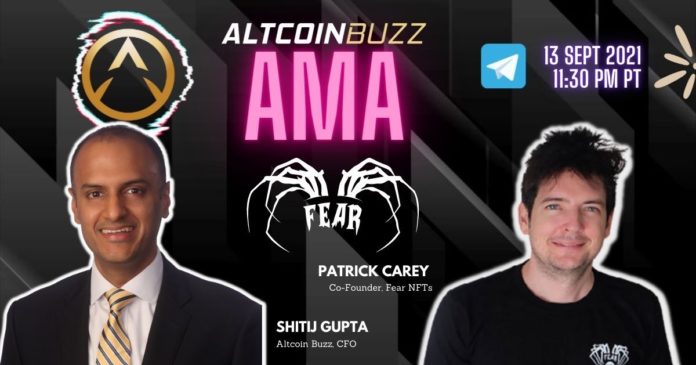 Fear (FEAR) is an ecosystem for blockchain horror play-to-earn (P2E) games with NFTs. The game was designed by the creators of the bloody “Whack IT” indie game series. The platform provides quality animated, blockchain-based NFT games for young adults and teenagers.

The CFO of Altcoin Buzz, Shitij Gupta, anchored the Fear AMA session on our Telegram channel. He was joined by Patrick Carey, the co-founder of Fear. The AMA took place on September 12th, 2021.

Below is a recap of the AMA session with Patrick Carey to understand what the company has been up to recently.

Q – Give us a brief introduction about Fear and a little history about the project.

FEAR is a blockchain horror gaming ecosystem that allows games to be onboard quickly with NFTs and play-to-earn.

We originated from the Whack IT dev studio seven years ago. In case anyone doesn’t know who Whack IT are, we created a famous series of violent bloody horror games that went viral on YouTube. We are targeting similar scary games to onboard into our ecosystem and allow gamers the opportunity to actually enjoy the games they are playing while earning FEAR. That’s it in a nutshell.

Q – Tell us more about the community and about “whack your undead neighbor,” which was quite interesting.

Well, I’ll tell you an ongoing joke about this game first. In the team, it was actually billed to the community as a “showcase” game because its main purpose was to show our community how quickly we can deliver a game whilst also testing a lot of the features of our ecosystem on a small scale. But since then, it’s taken on a life of its own. It had a lot of plays (400K) since it launched at the end of June.

The game started out as a point-and-click violent game with dark humor that we then used to onboard two play-to-earn mini-games:

However, we are this week releasing a much-improved version of the latter, which will become a game of itself involving a lot more sophisticated gameplay and ways of earning.

Q – So, from a historical perspective, give us a timeline of how it went from a dark/funny horror game seven years ago to coming back to life as a P2E and NFT concept.

So, we began Whack IT games as a casual horror gaming series with our first game hitting the web. Then the mobile market approximately six years ago.

We then went on to release four further games all with a similar theme. You have a protagonist in the game that you need to find different ways of taking out. Throughout the release of this game, we were picked up naturally by some of the biggest gaming YouTubers in the space, including Pew Die Pie.

In total, we picked up a few hundred million views, plays, and interactions on our past games. That is what we are aiming for in our future releases, which is where we are now.

Q – We have two questions that you can probably answer in a go. What is the role of NFTs in the game, and how do players farm special NFTs within the games?

The current NFTs have three different features in the game: allow you a ticket to enter our games in play-to-own mode, allow unique content to be seen via kills, and will allow unique defense units to be deployed which will make play-to-earn easier with the Clucking Hell update.

In terms of where to farm these NFTs, head over to this link. Here you can stake using the Polygon version of FEAR, which provides you with rewards. Also, you use the rewards and, in some cases, as a fee to purchase the NFTs.

Q – What other utility does the FEAR token have?

Let’s chat about boring investment utility first. We have various staking options at the moment:

Now for what gets me excited, FEAR is going to be required in a user’s wallet to play all our future premium horror games. And along with that, it will also be spent in small amounts to allow you to progress further in games should you D-I-E.

Whilst playing the games, you will progressively earn FEAR back. There are also a few surprises coming up for further token utility that I will elaborate on later.

Q – Tell us how you are keeping the community engaged given the fierce competition in the gaming/P2E space. In other words, why should an investor look to FEAR as the next 10x token from here?

Great question and one that has been at the forefront of my mind over the past weeks. Especially as we started seeing what I call Gaming Token Dilution.

Allow me to elaborate on that last term. We are experiencing a phenomenon where a lot of small indie companies are realizing if they release a not-so-sophisticated game into the market, they can send out a coin and gain easy funding. And the number of these types of coins coming onto the market has increased exponentially, which I think makes it hard for long-term investors to know where to put their hard-earned money.

We are not trying to be a single-game, single-token project. We are building a horror gaming ecosystem that allows play-to-earn on real existing games that have proven to have large audiences and cult followings. This is important as we aren’t testing the market based on the gameplay. We are testing the market based on how to integrate play-to-earn in an addictive manner that’s fair.

So, I’d say to investors look at the type of upcoming games we are bringing on board – I can elaborate on these games and how we will make them seamless for retail gamers to play-to-earn later.

Q – Let’s talk about the next game in line – Araya – which is slated to launch at the end of the month. What is it about?

Fear CMO Ash answered the question: Yes. The game we can’t wait to release. Jump scares, checkpoints, and crafting. Pat and the guys are working around the clock integrating a P2E model that will be the first of its kind in blockchain.

The game itself is based around Araya, who was killed in an old Thai hospital. Merissa, her soon-to-be friend, received a random text message from Araya leading her to believe she is still alive, and the quest begins. The mysterious and haunted hospital is dark, and I can assure you that the light in your hand is a major part of the dynamics.

Q. Twitter – I still remember playing Limbo, a horror-themed Android game. This is so cool. My question is: Why ecosystems are developed uniquely for each game? Can the NFTs of one game in Fear be transformed to another game in Fear? Does it involve a concept of Metaverse?

Fear CMO Ash answered the question: Without giving too much information as we have something major lined up for NFTs, let’s just say we are bringing out a gamer-orientated marketplace where not everything is what it seems. Once we release, this will allow NFTs from different games within the Fear ecosystem to be traded.

Q. Twitter – I hope Fear NFTs bring a lot of nostalgic memories of our childhood. Will there be inter-game portability of NFTs? The need to have both Matic and NFT tickets are troublesome. Will you be offering an instant swap mechanism in the near future?

Fear CMO Ash answered the question: Tickets will be abandoned in future games. This was just for our showcase game to allow P2E to get up and running quickly. Future games will be a lot simpler to be played with small amounts of Fear in your wallets.

Q. Twitter – What should $FEAR holders expect to see in regards to different project rollouts and marketing campaigns tied to #Halloween this year?

Q. Twitter – What kind of surprises do you guys plan to give us for the future, and would you guys consider partnering with Hollywood horror movies to bring NFTs to the mainstream?

So, questions 3 and 4 have a lot in common. We have a packed dev and game pipeline coming up in the next two months.

We have Araya, which we’ve talked about. Whack the Demon, which goes way beyond a simple point-and-click game.

Let’s just say it’s going to allow us to easily bind all the games under our ecosystem whilst scaring the hell out of the community.

The Altcoin Buzz community gratefully thanks Patrick Carey, Fear co-founder, for taking part in the AMA session on the 12th of September on our Telegram channel.

Ifeanyi - September 5, 2019 0
The TRON Foundation doesn't feel like resting. In a new tweet, it has announced the release of the code for Tron’s Sun Network Version...