Vitalik Buterin, the co-founder of ETH, believes that high ether prices are good. They will contribute to network security and the wider ecosystem’s development.

In an interview with “Unchained,” he answered a number of questions. One of them concerned the importance of the cryptocurrency’s price. He mentioned his earlier approach of downplaying the importance of an asset’s value. By and large, this was done in order to distinguish itself from the motley crew of other pump-and-dump, dreaming of lambo, type of coins. He added:

“But it was also about minimizing legal risk by basically trying to make the project seem more distant from something that would be covered by financial regulation.”

However, today regulators communicate more with these kinds of projects. Hence it is difficult to pretend that the price is not important. The regulators, says Buterin, will see through that. At the same time, he expressed an opinion about an asset’s value. The first one concerns security:

“I can tell you what things are clearly important about why the price being higher rather than lower is good. One of them is obviously security. If the price is zero, then the network can’t be secure. That’s true in proof-of-work and proof-of-stake.”

Concurrently, his second argument comes down to the fact that the creators and participants in projects within a given crypto ecosystem tend to have a stake in the token. At the end of the day, they benefit if an asset’s value remains high. For instance, because they have more funds for developing their work.

No need to flood the market

During his interview, Buterin also emphasized that developers’ role by stating that they have a responsibility to refrain from doing “stupid things that would lead to the price going to zero.” For instance, Buterin is against flooding the market with newly minted coins.

Overall, Buterin is known for his edgy remarks. Last fall, he made a statement that upset many crypto enthusiasts, saying that there is no chance that the cryptocurrency and blockchain space will see “1,000-times growth” again. Later on, he explained the reasoning behind it.

Most recently, he tweeted a proposal to increase user fees on the Ethereum network in order to raise sustainable funding for wallet developers.

Currently, ETH is seeing a decline, trading at $135,74. To find out more about what distinguishes ETH platform from BTC’s one read this article. 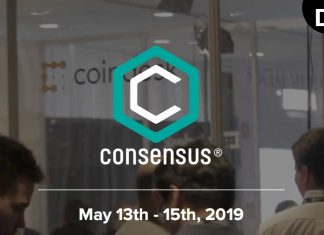 Chris Perrotta - May 15, 2019 0
Consensus Day 2 is in the books and while there might not have been bombshell news like Day 1, there has been a lot...