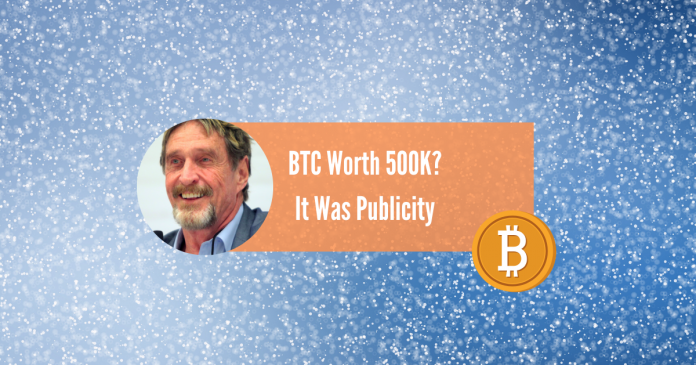 In an unexpected turn of events, John McAfee confronted his followers with a very blunt question.

Before reading it, make sure that you’re a) awaken, b) not comfortable with the thought of someone eating their own genitals. And c) you follow McAfee on Twitter as well as d) you’re not an idiot.

If unsure, no need to continue. Otherwise, familiarise yourself with the recent tweet by McAfee below.

Wake the fuck up. What idiot thinks anyone is going to eat their own dick ever? Especially in TV!! Are you that idiot? God .. I hope none of my followers are that stupid.

To remind, in July 2017 McAfee, who fancies all sorts of BTC price predictions, said that “he would eat his dick”. That is if Bitcoin doesn’t end up trading at $500,000 “within three years”. Now that those three years have passed, McAfee retraced the tweet “if not, I will eat my dick on national television” and explained the rationale behind it.

if not, I will eat my dick on national television.

It’s all about marketing baby

So, why did McAfee do it? Why did he tweet such a thing?

For very trite reasons it seems: to get more followers. Accordingly, McAfee explains that since the tweet has garnered a lot of attention, he was able to secure 10,000 followers in one day. It was, what he calls, a “ruse to onboard new users”.

However, he did not stop there. Apparently, McAfee’s love for Bitcoin is now many moons ago. He calls it nothing short of “an ancient technology”. Not only do “all know it”, but it is also the case that “newer blockchains have privacy, smart contracts, distributed apps and more”.

He ends the tweet comparing Bitcoin to the Model T. Neither are the future, according to him.

A ruse to onboard new users. It worked.

Bitcoin was first. It's an ancient technology. All know it.

Bitcoin is our future?

Was the Model T the future of the automobile?

A not so good reaction

Rather expectedly, the reaction to this outburst was a mixed one. One user simply wrote, “Just admit you are wrong”. Another one tweeted: “Unfollowed”.

Others were more supportive, saying that it is “very true” that Bitcoin is like the Model T.

Very true. Bitcoin is the Model T. Privacy, smart contracts, and other use cases have created the need for innovation

While it is up for the community to decide the appropriateness of McAfee’s action, there is one thing worth bearing in mind. That is: don’t rely on what other people claim. After all, the majority of us, including Bitcoin bulls and bears, have our very own underlying motives for actions. As well as generating price predictions. More so, since just recently McAfee said that he was sticking to the prediction that he now refuted.

Do your own research and trust your own guts.

What are your thoughts on McAfee’s move? Let us know. 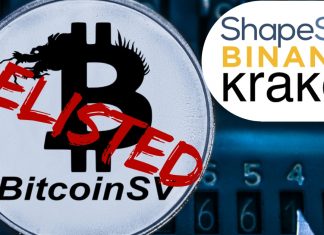