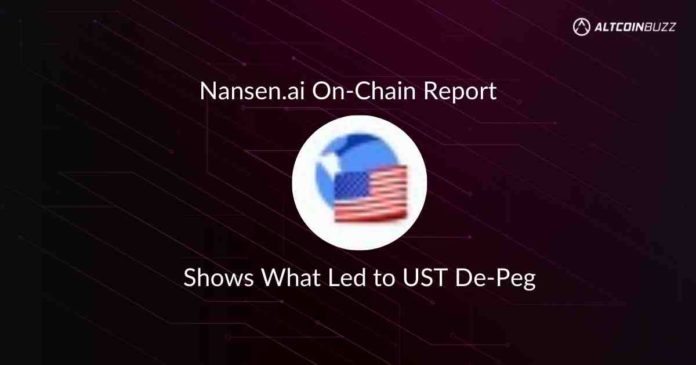 Nansen, a blockchain analytics platform, released a report last week. Their research team takes a closer look at the TerraUSD (UST) de-peg. There’s lots of talk of an attack by one bad actor on Terra. Nansen proves this to be wrong.

They do this by using only on-chain evidence. We take a deep dive into this Nansen report of the TerraUSD de-peg. Furthermore, we also look at how many coins lack liquidity for large purchase or sale events. So, first, let’s see what the Nansen report comes up with.

1/ What really happened to $UST?

After weeks of work from our team of researchers, here's an in-depth look at the $UST crisis that brought down the Terra ecosystem.

Make sure to retweet if you find it insightful too.

For this report, Nansen used on-chain data from both the Terra and Ethereum chains. Because of this, they didn’t examine any off-chain events. For example, what impact it had on investors or the BTC reserves backing UST, or what happened to them. These are also important events, and they do need more research. However, they are not in the scope of this Nansen report.
What Nansen did use, are two data sources for this on-chain analysis.

They looked at various social media outlets and forum threads. As a result, they concentrated on the May 7th-11th 2022 period. This led them to start their investigation with the Curve liquidity pools.

As a result, they found an explanation for the UST de-pegging. Most importantly, they made a list of seven wallets that played a major role in this. 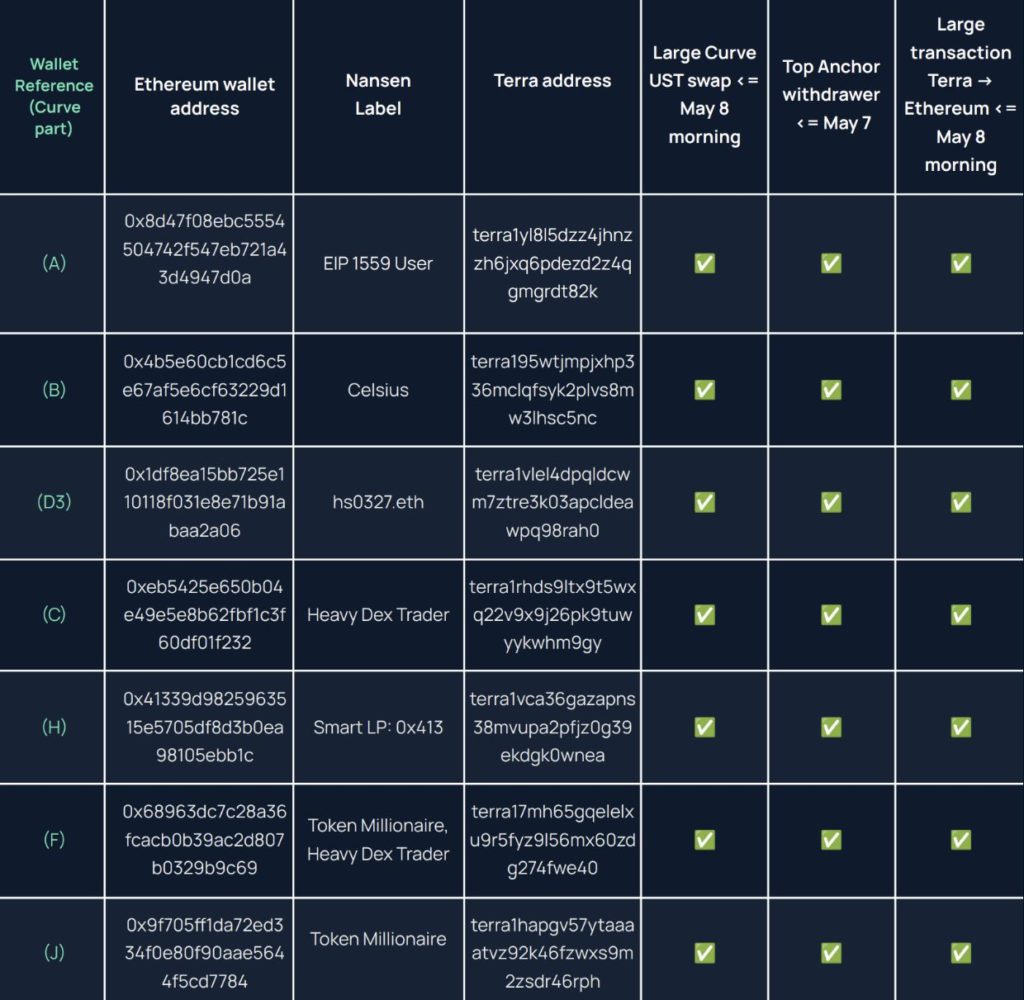 Curve Is Where It All Starts

All social media pointed at the Curve 3 pool as starting point of the TerraUSD de-peg. Allegedly, it was one actor who depleted this USDC / DAI / USDT liquidity pool. Research showed that besides the May 7-11 period, there was also lots of movement in March 2022. Besides the 3 pool, Nansen also looked into the activity of the Curve 4 pool.

During March 2022, there were various deposits of $60 million UST to the Curve pools. This had no effect on the UST peg. However, on May 7th and 8th, the UST started to de-peg. Now it affects the UST price. This news flooded social media quickly and spread like wildfire.

This is where the battle between UST inflows and outflows and the UST de-peg risk start. The Luna Foundation Guard (LFG) takes out around $150 million. They do this to defend the peg, as a UST peg insurance. A wallet ((0x8d…7d0a) that only interacts once with an inflow and once to swap UST for USDC adds $85 million. Another four addresses add $106 million. As a counteracting measure, the LFG takes out another $189.6 million UST. This battle continues into May 8th. See the picture below, it shows the wallets with the largest flows. 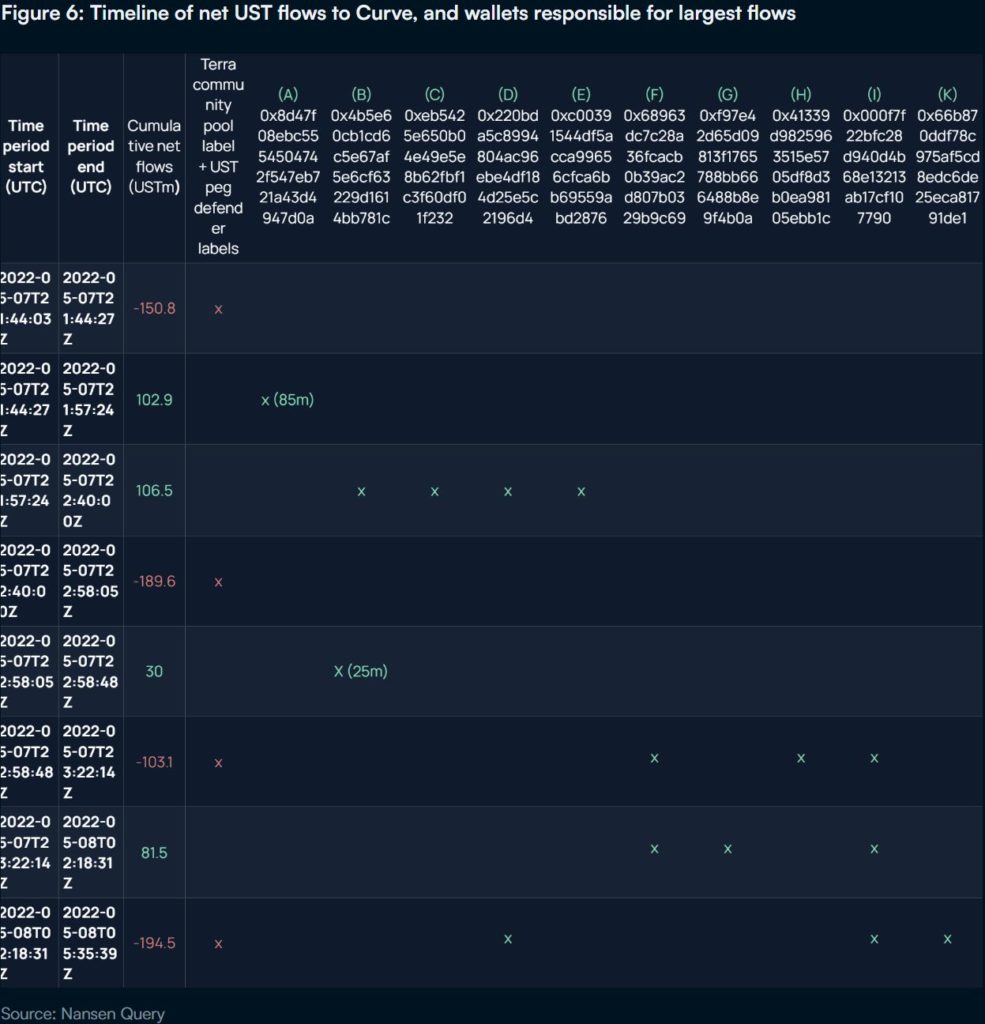 This accumulated to 18 wallets, flowing in 77% of all UST during these two days. Four addresses represented 52% of all inflow.

The team’s next step is to cross-reference the involved wallets with Terra and the Wormhole bridge. This would show more clearly if a wallet participated in the TerraUSD de-peg.

A total of 20 major addresses started to withdraw from Anchor. With 5,051 transactions, they withdrew no less than $2 billion, between May 7 and 10. It may come as no surprise that some Curve inflow wallets, also meddled in Anchor withdrawals.

However, what is interesting, is that they already started to withdraw as of April 2022. Two tracked wallets withdrew most UST from Anchor between April 1 and May 6. So, before the de-pegging even started.

Another two wallets withdrew $420 million between May 7 and May 10 in 15 transactions. They were also the two wallets that bridged most from Terra to Ethereum through the Wormhole.

The Wormhole bridge works between many chains. However, for this report, we only focus on the Terra to Ethereum bridge.

Among others, the top wallets used Wormhole for taking UST off Terra and bridge it to CEXs. There, they swap UST for other stablecoins. The Nansen team concentrated on the May 5th to 8th period. This is when the most activity took place, aside from a period in April.

Between May 5 and 8, there were 974 unique Terra wallets active. The top 10 wallet addresses took care of 57% of all transactions. But even between these top wallets, the amounts varied. Between the top wallet and the tenth wallet sees a difference of $144 million UST. 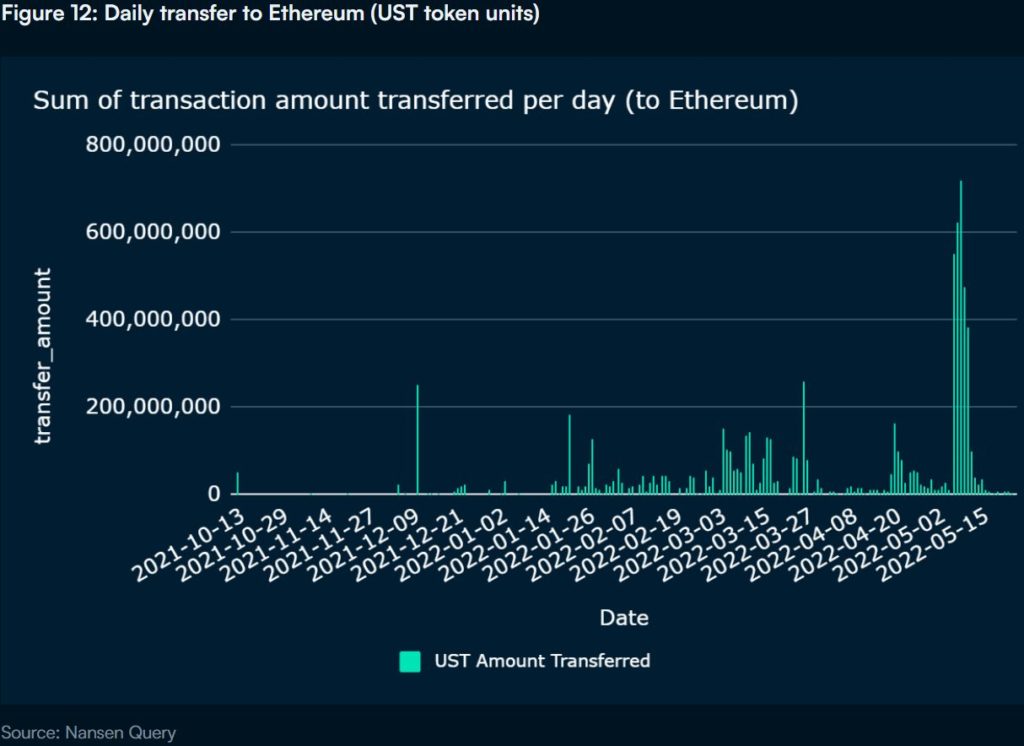 Some Suspected Wallets Under the Magnifying Glass

The owner of the wallet (0x8d…a) created this wallet just a few days before May 7. That is the date they used it for the first time. Most transactions were UST and USDC related. There are no transactions after May 9. For example, this wallet bridged more than $85 million UST on May 7 to Ethereum.

This wallet has a Terra sister address (terra1yl..k) that withdrew $193 million from Anchor between May 7 to 10.

Wallet 0x4b..c became active in late April 2022. It bridged $175 million from Terra to (0x6f..f) Ethereum on May 7. The receiving wallet sent it to a third wallet. This last wallet swapped $125 million UST to USDC on Curve.

The team links this wallet also to the top wallet on Terra (terra195..c), bridging out UST between May 5 to 8.

The Nansen team dissects a further 6 wallets this way. In total, these other 6 wallets bridged an extra $268.3 million from Terra to Ethereum.

The wallet owners use CEXs to swap UST to other stablecoins and for arbitrage. A total of 225 million UST tokens arrived at CEXs. After the Curve swaps, this was another blow to the de-pegging.

The top wallets, involved at Curve, resurfaced here again. The team credits at least one wallet with a possible ~$132.5k profit on just one arbitrage trade.

So, we talked a lot about the UST de-peg. Now, the question rises, how many other coins lack liquidity? Liquidity is the big issue here. There are quite a few, and we show you two samples.

Cardano is a great project and at Altcoin Buzz we are big fans of the project. However, did you know that ADA stakers lock 71% of all ADA tokens? Now, to clarify this, in contrast to many tokens, ADA does not have a bonding period. This means that technically it’s liquid. But, what if out of nowhere, somebody starts a liquidity event from a huge short position? A crisis starts knocking at the ADA door in such an event. Whilst all ADA stakers are happily tracking their daily interest rate earnings from staking.

On the other hand, having such a high staking percentage secures the network very well. So, it’s not only looking bad. However, the moment somebody shorts $1 billion of ADA, let’s say on Binance, there is a problem. Since most ADA is in staking contracts, locked up, it is not available for liquidity. And it definitely isn’t on Binance to help balance the order books either. 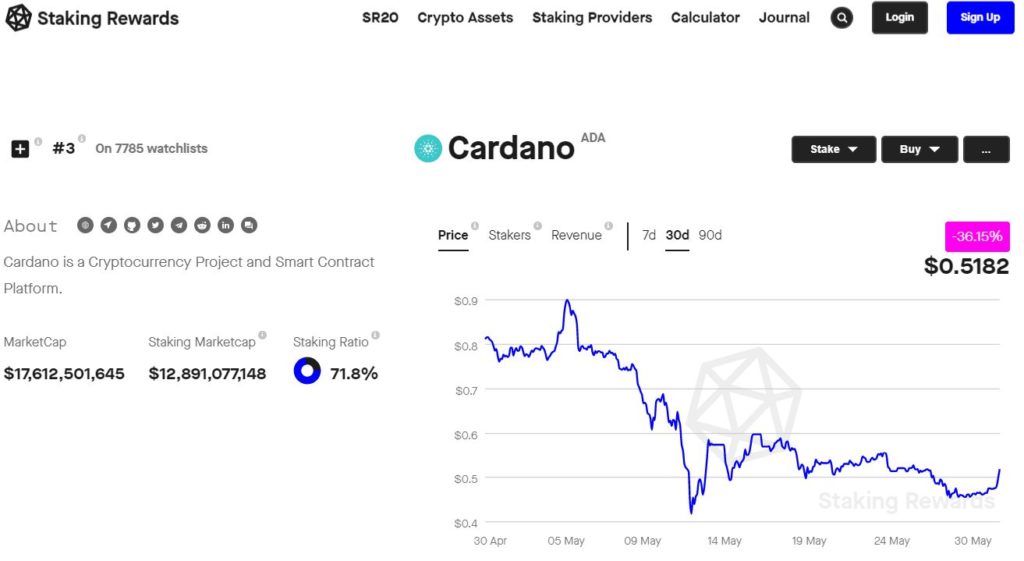 Currently, Apecoin issued only 29% of all its tokens. There is no real liquidity of Apecoin tokens. The release schedule of Apecoin locks all other coins up between 12 and 48 months. This can lead to quite a few liquidity issues, like what we saw with the TerraUSD de-peg.

On social media, there was plenty of talk of a sole attacker of the TerraUSD de-peg. However, the Nansen team showed clearly that there are a few wallets involved in the UST de-peg. They base this on their on-chain research activities.

The team boils it down to seven addresses. Six of these wallets also interacted with CEXs. For instance, the wallets exploited the shallow liquidity of the Curve pools. In turn, they used this among others for arbitrage. As a result, 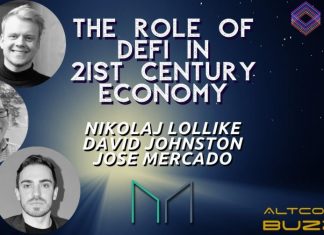 What is The Role of DeFi?