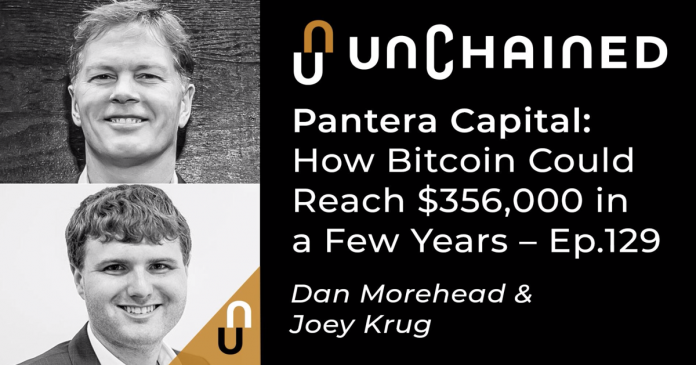 CEO of Pantera Capital, Dan Morehead, expects the Bitcoin price to reach as high as $356,000 by 2022. Speaking on the latest episode of the Unchained podcast, Morehead spoke about the development cycle of blockchain technology.

In episode #129 of Laura Shin’s “Unchained” podcast, Dan Morehead, Founder and CEO of Pantera Capital Management, made some interesting remarks about Bitcoin and blockchain. Amongst other things, Morehead gave a price prediction for the price of Bitcoin.

During the podcast, Dan Morehead and Joey Krug, co-chief investment officer of Pantera and founder of Augur, discussed where we currently are in the development cycle of blockchain technology.

When asked about the development cycle of blockchain technology by Laura Shin, Morehead commented that people should realize that we are only 10 years into a two-decade long project. Furthermore, people who only focus on the price of Bitcoin and short-term fluctuations should zoom out a bit more.

According to Morehead, when looking at the price chart for Bitcoin over a period that is longer than year, the Bitcoin price is always going up. Therefore, Morehead commented that at Pantera Capital they do not worry about short term fluctuations in the price of Bitcoin and that they have more of a 3-5 year timeframe in mind.

Next, Morehead said that if we graph the price of Bitcoin logarithmically (“to take away the crazy exponential growth”), we will notice “a typically consistent line”.

“At the beginning of this year, when we were at the bottom of the crypto winter, we graphed what it would be like if Bitcoin spent the next 12 months getting back to its trend line, and then from there out, just stayed at its trend. And it’s trend has been to grow at 235% compound annual growth rate–at the time, Bitcoin was $3,00-$4,000. That put Bitcoin at $42,000 by the end of 2019, which I know sounds crazy. But essentially, we are half-way back there. It’s right on the trend line. I think it’s a good shot that by the end of the year, we hit that. And then if you just extrapolate that line out for another year, it’s $122,000 per Bitcoin, and in one more year, it’s $356,000.”

Pantera Capital is an investment firm focused exclusively for ventures, tokens, and projects related to blockchain and digital currencies. The firm was founded in 2003 and is a well known investment firm in the crypto space.

You can find the full interview with Dan Morehead here:

Lightspeed Wants to Join Crypto World But Doesn’t Know How

Lesia Dubenko - May 23, 2018 0
Lightspeed Venture Partners, a Silicon Valley firm known for investing in hit apps like Snapchat, is set to create a crypto-fund, according to people...

$6 Billion Worth Of Bitcoin All In One Block