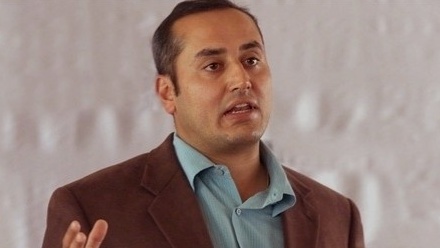 Warren Buffett has found an adherent: Speaking to Arabian Business, Hotmail founder, Sabeer Bhatia, has slammed cryptocurrencies claiming that they are “too good to be true.”

“The underlying business model that I have looked at is fraud. Cryptocurrencies are nothing more than white papers, a hope in the way the world will be,” he said.

He further elaborated his stance by pointing out that the ideas behind cryptocurrencies have not been implemented and hence “could not be valued at billions of dollars.” He went on to slam the IOTA token, which currently trades at $1,50, by saying that “they haven’t sold a single device to anyone. The whole idea is: ‘In the future, one IoT device will be able to talk to another IoT device and settle any financial transaction between them using blockchain. That’s the idea. And although it’s never been implemented, the idea is worth $15bn? Really? The values are entirely speculative.”
And just like Buffet, who previously said that “the asset itself is creating nothing” and that Bitcoin is “probably rat poison squared,” he discourages from investing in cryptocurrencies. And believes that no parallels should be made with the dot.com bubble.
“It’s worse. The likes of Pets.com and the Books.com were at least versions of e-commerce platforms that are only growing today,” he said. “There [were] missteps back then but, guess what, we’re doing everything online today. They were right… but they were too early and didn’t have the staying power like an Amazon. Those failures tried to pick a vertical and wanted to be the solution for that segment. [There’s] nothing wrong with that.”
At the same time, he acknowledges that the popularity of cryptocurrencies is growing even though “we’re getting down to the nitty-gritty. What are they?”
He also adds that cryptocurrency is trying to become a network emphasizing that “the most successful companies of the last 10-15 years have been networks” and asks rhetorically “but what is the network really doing? The fundamental question of creating value for society is one they carefully dodge.”
While Bhatia is highly critical of the cryptocurrency market, he is far more positive when it comes to blockchain, which he believes to be “a means of cheap, instant and democratic cross-border settlement.”

Garrett - April 16, 2018 0
Ian Balina, a well-known YouTuber and cryptocurrency investor, was hacked last night during a live stream. Balina was discussing an ICO when he realized...