Nigel Green, the CEO of independent financial consultancy deVere Group, is very bullish on XRP. Green published a blog post last Thursday, stating that XRP “will hit the $1.00 mark before the end of 2018”. Furthermore, Green believes that it will be XRP who will continue to gather the most momentum in this period in the crypto market.

On Thursday, Nigel Green, the CEO of independent financial consultancy deVere Group, expressed in a blog post how bullish he was about the future of XRP, and in particular said that XRP “will hit the $1.00 mark before the end of 2018.”

Founded in 2002 by the current CEO Nigel Green, deVere Group is one of the world’s leading independent financial advisory organizations, with more than $10 billion under advice from over 80,000 clients in 100 countries. According to the deVere Group website, the company helps clients, who are primarily expatriates and international investors, reach and often exceed their financial goals.

Besides the blog post, on Tuesday the 25th of September, deVere released a press release in which Green mentioned on the incredible 100% rise in the price of XRP the week before. According to Green, there has been “immensely positive buzz regarding cryptocurrencies in the last few weeks” and that XRP had been the real star performer. Furthermore, Green expects XRP to maintain its bullish momentum.

In the press release Green commented:

“I believe that whilst the crypto market, in general, will be primarily bullish between now and the end of the year, it will be XRP that will continue to gather the most momentum in this period. “Cryptocurrencies are the future of money and, clearly, XRP is proving to be one of the most useful cryptocurrencies for businesses, organizations, and individuals.”

“XRP will go on to gain more traction than many of its rivals because of its unique features, technologies and problem-solving capabilities. Many of these unique characteristics enable it to help businesses, including real estate and tech firms, to save money and speed-up and add more security to transactions. This is also why hundreds of financial institutions across the world are already working with XRP – and this is a trend that is set to continue and grow.”

Then, on Thursday, Green re-iterated his super bullish outlook on XRP and continued its praises via a post on his blog. According to Green “there’s no stopping Ripple XRP!” Next, he said that he expected the usage of XRP by financial institutions around the world to “grow exponentially.”

Green made the following price prediction for XRP:

“The use of XRP will rise, which will have a positive impact on its price. I am of the opinion that this cryptocurrency will hit the $1.00 mark before the end of 2018 and could even double in a year’s time as the adoption and usage of XRP skyrockets.” 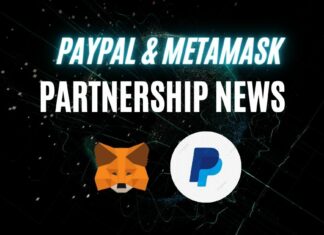 Camille Lemmens - December 16, 2022 0
Two giants in the financial world are starting to work together. One person sees this as the start of mass adoption for crypto. Others...