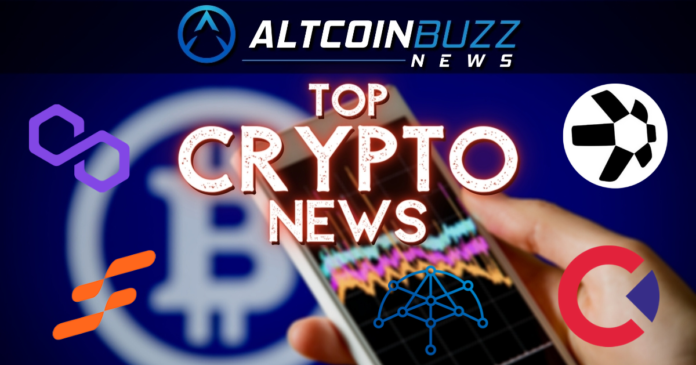 Let’s deep dive into some interesting crypto news for today.

Quant announced the launch of the full release of Overledger 2.0. Moreover, this release would provide interoperability to the Ethereum, Ripple, and Bitcoin mainnets. As per the tweet, the team has launched a new Overledger API that will help to bridge the global ecosystems of DLTs and APIs. In addition, some innovative features are implemented, such as single sign-on for enterprise customers, scalability, and resilience updates for cloud infrastructure. The project also stated that they will follow ISO TC/307 standards to streamline the interface. Additionally, this will help Overledger to work as a Universal Translator and boosts its usage by supporting other DLTs and blockchains.

BSC Station partnered with Umbrella Network to enhance its suite of decentralized finance (DeFi) applications. With this partnership, BSC Station will utilize Umbrella’s secure and reliable price feeds. This price feed support includes key crypto pairs as well as mid-cap cryptocurrency data. Umbrella Network is a decentralized Layer 2 oracle platform that offers high-speed and reliable data service to the DeFi market at low costs. Besides this, Umbrella’s Layer 2 data solution will enhance NFT and non-NFT project feeds, which will help in the secure distribution of tokens to investors with higher returns. BSC Station is a DeFi application that offers an initial token distribution launchpad, NFT auctions, and the BSC Swap DEX.

Convergence Finance announced its integration with Moonbeam to facilitate its deployment to the Polkadot Substrate and Web3.0 environments. Moonbeam is a parachain on Polkadot that offers an Ethereum-compatible smart contract platform to design natively interoperable applications. In addition, this coalition helps Convergence to become the first real-world asset AMM in the Polkadot ecosystem. Users can now enjoy effective and faster trading with the Polkadot ecosystem at low gas fees. Convergence Finance chose Moonbeam due to the latter’s EVM compatibility, multi-chain solution, and Polkadot’s ecosystem and security.

Fractal revealed the launch of its staking program with lucrative rewards. As per the tweet, this program will start on May 12, 2021, for the FCL and ETH/FCL V2 liquidity pools. The team stated that users can expect up to a 40% return while staking their assets in the Fractal Wallet. In addition, the project has allocated $7 million worth of tokens to these reward pools. The platform allotted 5 million FCL to the FCL reward pool and 15,000 FCL to the ETH/FCL V2 liquidity token reward pool. Additionally, the team introduces Data Staking, which entails users being rewarded for getting a decentralized credential issued to their wallets. Notably, users who passed the Fractal KYC process can participate, and this staking program will utilize FCL tokens and the V2 version of the Uniswap ETH/FCL liquidity pair token.

In the last bit of crypto news for today, we have UniLend announcing its launch on Polygon (formerly Matic) to expand DeFi with Layer 2 solutions. With this coalition, Polygon users can utilize UniLend’s platform features like decentralized trading, borrowing, lending, yield farming, and much more. Polygon offers an Ethereum scaling framework which means UniLend users can enjoy its low gas fees. In turn, Polygon users can employ UniLend’s comprehensive DeFi tools via an easy-to-use bridge. Additionally, Polygon users will get the option to take advantage of UniLend’s flash loans using any ERC-20 asset with just one click. Overall, UniLend chose to launch on Polygon due to the latter’s massive volume, near-zero trading fees, seamless user onboarding, yield farms, and rapidly growing user base.