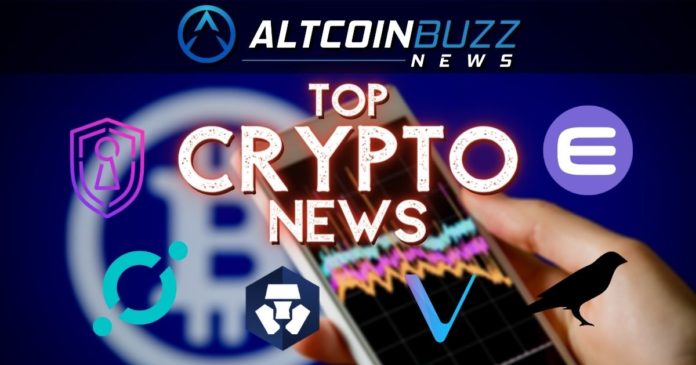 Let’s review some interesting crypto news stories for the day.

Blockchain-based gaming platform Enjin has partnered with Stormrite to integrate cosmetic NFTs in the upcoming RPG for Xbox and PC. Stormrite is an open-world action RPG developed for Xbox and PC, which features cosmetic non-fungible tokens (NFTs) that can be purchased on the Enjin Marketplace.

This integration helps NFT owners to link their Enjin wallet directly to Stormrite on PC and Xbox. Further, this will allow players to customize their character and weapon skins depending on the tokens they own. In addition, Stormrite players would trade their in-game cosmetics peer-to-peer swiftly, while providing these items real-world value through Enjin Coin (ENJ). Notably, the Stormrite team has plans to launch its first public build on PC in the year 2022, following Xbox later this year.

The open world RPG called Stormrite uses @enjin's Jumpnet, and will come to PC and @Xbox next year!

NFTs coming to Xbox, you ready?

Crypto.com Pay has declared the beta launch of its new recurring payments feature for its merchants. As per the tweet, this new feature allows merchants to offer subscriptions for their products and services to customers. In addition, this will also accept periodic payments from customers seamlessly without any extra cost. Interestingly, this feature is a completely automated process. Hence, all subsequent recurring payments will be deducted directly from a designated Crypto.com App wallet until the end of the subscription period.

In order to use this feature, merchants have to create a curated list of subscription products and services, as well as configure sale prices and billing periods through their Dashboard. Later on, customers can settle payments in more than 20 cryptocurrencies, including BTC, ETH, USDT, and CRO through the Pay feature in the Crypto.com App. Consequently, this would provide more convenience and flexibility to both the merchants and customers.

💪 More convenient and flexible for customers and merchants

Blockchain-based supply chain management platform VeChain hit a major milestone on the Thor mainnet. As per the tweet, the VeChain Thor network has surpassed 10 million blocks without any downtime. In comparison to Bitcoin, which has recorded a 99.98% uptime since January 2009. VeChain operates on a proof-of-authority (PoA) consensus mechanism, which allows the network to process high-speed transactions based on identity and reputation as a stake.

As stated, the project has some major infrastructural updates such as proof-of-authority 2.0, more partnerships, community dApps, growth, and more coming in the near future. The tweet also emphasized consistent enterprise usage from commerce giant Walmart and governmental adoption from both San Marino and China. Hence, this is a major milestone in terms of scalability, security, and the rock-solid stability of its blockchain.

Today, the #VeChainThor mainnet has just reached 10,000,000 blocks without downtime – a major milestone that is testament to our public blockchain's scalability, security, and rock solid stability.https://t.co/tCEOR0rzzL

The ICON Foundation has announced the completion of its integration to Kusama. As per the tweet, the project has completed the BTP integration to the Moonriver parachain (Kusama). The team is also building a web application to manifest the usage of these smart contracts, including cross-chain token transfers, and more. This web app is dubbed Nexus, which will be available to the public in the near future.

In addition, the Binance Smart Chain implementation was also completed and is currently under review. As stated, the team is integrating the smart contracts into the Nexus portal. Consequently, this would help users to transfer from ICON to the Kusama parachain and BSC and vice versa. Additionally, the team also has plans to collaborate with multiple potential blockchain partners in the coming future.

The long-awaited ICON 2.0 migration is nearing completion, the @iceblock_chain continues to progress, & our first BTP integration target to the @MoonriverNW parachain, @KusamaNetwork, is now complete. https://t.co/JEl9dMuZIN

In the last bit of crypto news for the day, we have Safe Haven unlocking its Fixed Staking pools. Safe Haven is a platform that creates blockchain-based financial, asset management, and inheritance solutions.

As per the tweet, each staking period will run for 30 days, until they have been filled. Users must maintain their staked amount for the 30 day period to receive rewards into their wallets at the end of the period. Notably, the yields are determined by the node holder status, with the highest 6.5% APR going to Legacy Node holders while those without a node will get just 2.5%.

In less than 24hrs of September #FixedStaking pools opening, all but two #APR boost #milestones have been unlocked.