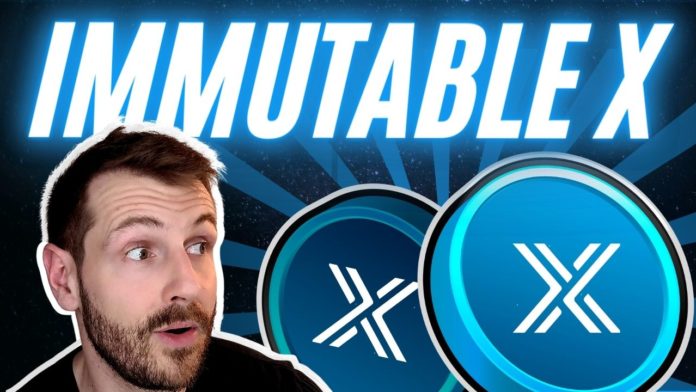 Layer 2 solutions are the big thing currently in the crypto space. They are independent blockchains, built on top of Ethereum. We call them ‘solutions’ because they solve some well-known Ethereum issues. So, L2s are fast and offer low-cost transaction fees.

A few samples of L2s are Polygon, Optimism, or Arbitrum.  But lately, Immutable X has grabbed our attention. Its partnership with GameStop has been one of the most talked-about events. With Immutable X, it’s all about P2E games and NFTs and is expected to power the next generation of web3 gamers. Will it become the next big thing in crypto? Let’s take a closer look.

Games and games need fast and cheap transactions. That’s why games can’t run on Ethereum. Immutable X does offer all this and lots more with up to 9000 TPS and no transaction fees. And they’re 100% carbon-neutral. This platform has its origins in the God’s Unchained game. 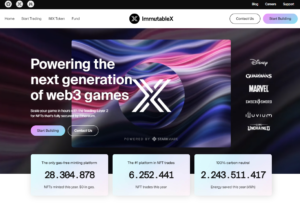 Moreover, Immutable X designed itself for games and created the perfect setup:

Also, they have a brand new, exciting feature to offer. That is their noncustodial staking option. Their first cycle runs from July 1st to July 30th. The second staking phase starts in September.

Moreover, Immutable X is built on top of Ethereum, so they enjoy Ethereum’s safety and security. They use zk-rollups to send transactions to Ethereum. This means that they bundle many transactions into one transaction. In other words, Immutable X combines Stark technology for this with the Validium zk-STARKs.

In addition, they also have the Immutable X Link. With the X Link, you don’t have to switch networks when using the protocol. It takes care of all transactions between Ethereum wallets and Immutable X.

Their NFT Marketplace is also worth mentioning. Here you can trade all NFTs on the protocol. Projects that don’t have their own NFT marketplace, can use this as well. They also boast a global order book. This immediately distributes your NFTs to a variety of marketplaces. As a result, it boosts the liquidity of their NFTs.

Also, in Mid-June, Immutable X launched a $500 million Developer & Venture Fund. They spread the grants out over 4 years. Mostly in tokens, but selected projects will get cash incentives. This will boost the growth of their platform even more. This can also have a positive impact on investors. The token may start to perform well. This is what happened to Avalanche and Near when they started their respective funding.

On July 5th, Immutable X announced a fiat off-ramp for every game, marketplace, or app-building on Immutable X.

Developers can enable their users to sell L2 $ETH and have the proceeds deposited directly to their bank accounts. https://t.co/DmiyWV8wYy

Immutable X is an evolution of God Unchained and StarkWare. They have a steadily growing team. Their LinkedIn page currently shows almost 300 employees. Each week, new people announce on social media that they start a job there. Great to see in these bear market conditions.

They started as ‘Fuel Games in Australia. That’s where they are still based. They were heavily backed by Coinbase.  So, under the ‘Fuel Game’ name, they launched Gods Unchained.

The three co-founders are:

Also, StarkWare has its home in Israel. They look after the blockchain scaling options. Here are their 3 co-founders:

Immutable X has a rather stunning roster of games that they can show off. For example:

Which character do you want to try the most?

This brought among others Disney and Marvel NFTs to their platform.

IMX is the native ERC-20 and utility token of Immutable X. Its use cases are:

Moreover, during each staking cycle, you will need to stake at least 10 IMX tokens and trade at least 1 NFT. At the end of this cycle, the protocol distributes IMX tokens pending on your staking share. In September, they start with noncustodial staking. They will offer an interactive staking dashboard. These staking cycles will last 14-days. This gives more value to new investors.

On the other hand, the current price of the IMX token is $0.9214. The market cap is relatively low at $216 million. However, only 235 million tokens are in circulation out of a 2 billion max supply. IMX reached its ATH on November 26, 2021, with $9.52. However, with all the current positive news, the price moved up again.

Moreover, in the altcoin fear and greed index, IMX fares well given the current market circumstances. It’s holding out in a neutral position. Well done to IMX.

Live analysis for $IMX and other top 100 #cryptocurrencies pic.twitter.com/7BiVaVwFvT

Immutable X faces some standard blockchain risks. These include smart contract bugs, hacks, or flash loan attacks. However, a bigger risk may be when Ethereum completes the Merge. Is there a future for L2s? Rest assured. Vitalik Buterin himself said this in late October 2021: “Layer 2 is the future of Ethereum scaling and the only safe way to scale Ethereum while preserving decentralization that is so core to the blockchain.”

This was at the Shanghai International Blockchain Week. He also mentioned this: “The Ethereum ecosystem is likely to be all-in on rollups as a scaling strategy for the near and midterm future”. This is most certainly reassuring and shows the strength and impact that L2s make and have.

Therefore, their challenge will be to keep their eyes set on their roadmap. They certainly are ambitious enough. However, they also need to keep delivering. And this also looks good. They just started their funding and grants plan. Almost as we speak, they started their staking options.

However, it’s also important to get more games on their platform. They will also need to attract more players to their games. Currently, on DappRadar, Gods Unchained is their first game in the rankings. It only comes in at #35. This brings us to their competitors.

Their competition is in gaming. There are very few other L2s actives in this field. We exclude sidechains like Ronin. Let’s have a look:

So, there are of course plenty of blockchain games around. However, they are mostly built on L1 chains. In the L2 segment, Immutable X doesn’t have too much competition. Another reason why they need to cement their position in the blockchain gaming space.

Immutable X doesn’t work with fixed dates on their roadmap. They have however three categories: Next, In Progress, and Done. Currently, in progress are, for instance:

Next coming up are for example:

Excited to announce staking! The first cycle will start at *1 July 2022 0:00 UTC*. Move your IMX tokens to your Immutable X layer 2 wallet before then.

Recent events like Celsius highlight the priority for self-custodial staking. Your assets should always be yours.

A few things that stand out about Immutable X are their recent staking options. And of course, free minting of NFTs. Interestingly, Immutable X doesn’t look at Ethereum as a competitor. They rather use its security and safety.

So, the future may look bright for Immutable X in the P2E field. No gamer wants or needs a slow and expansive blockchain. Even with the Merge in place, the question will be if Ethereum will offer a fast and cheap option. On the other hand, Immutable X proved itself already in this field. 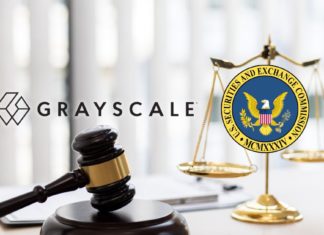 Grayscale Investments vs the US SEC

Racheal - July 2, 2022 0
Yet another ground-breaking legal proceeding is set to take place in the crypto space as Grayscale Investments drags the U.S. SEC to court. The world’s...