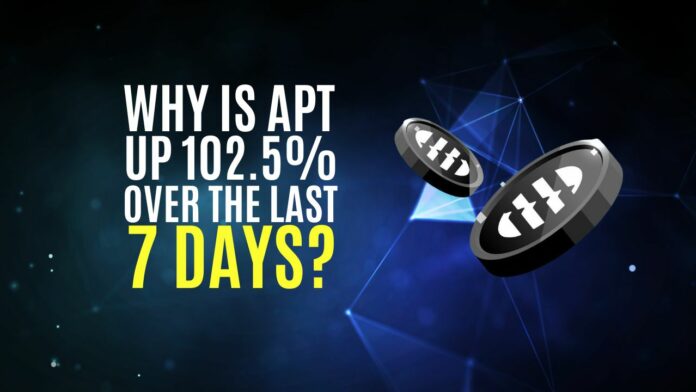 We see Bitcoin back at over $21,000. This is a rather unexpected move by Bitcoin, but not unheard of by BTC standards. However, a coin that is really pumping hard is APT, the Aptos native token. It went up by 102.5% over the last seven days.

So, let’s dive in why APT, the Aptos coin, is pumping so hard. Is it news? Are there new developments? Or is it just hype?

BUY or SELL📈$APT is pumping in this week, increasing more than 76% within 5 days😍

Aptos is a Layer 1 PoS blockchain that launched its mainnet back in October 2022. Its two founders, Mo Shaikh and Avery Ching, worked on the now defunct Diem project by Meta. They used the newly developed Move programming language for Aptos’ development. Aptos is often mentioned as a Solana killer. Some people even take it a step further and call it an Ethereum killer.

They were also closely connected to FTX. Back in July 2022, FTX held a funding round for Aptos Labs, in which they raised $150 million. Aptos seems to have emerged unfazed out of the FTX collapse. However, not all projects that were building on the chain remained unaffected. Mojito Market, a DEX, lost most of its project funds. They had this in custody on FTX. As a result, they had to suspend their operations.

However, before Aptos can threaten any other well-established chain, they still have a long way to go. Nonetheless, the recent price movement of their APT coin is something. It outperforms almost all other coins. According to CoinGecko, APT had its ATH on October 19th, 2022, with $13.73. However, the FTX collapse also affected the APT token. It tumbled to $3.60 and stayed in that range for a while. The current all-time low was only two weeks ago. On December 29th, it dropped to $3.08.

Before Bitcoin started its current pump, Aptos was already pumping hard. BTC gained 25.8% over the last 14 days. During the same time frame, APT pumped by 129.8%. So, what’s the reason APT is pumping so hard? See the picture below for the recent APT price development over the last 14 days.

Is There Any Exciting Aptos News?

The best news Aptos had over the last seven days came from PancakeSwap. We just wrote about PancakeSwap on Aptos. It’s the most popular DEX with the highest TVL on the Aptos chain. They voted on January 7th about continuing their multichain deployment on Aptos. The PancakeSwap community voted with 97% of votes for “yes.” The APT coin started its rise here. However, January 10th shows the start of the APT coin pumping. It was already up by 41% compared to a day earlier.

On the other hand, Bitcoin didn’t start its pump until January 12th. That was after the U.S. Consumer Price Index (CPI) published its new data. There was a modest decrease in inflation, from 7.1% in November to 6.5% in December. This seemed to have sparked a momentary price increase for both the stock and crypto markets.

Ever since January 12th, APT kept pumping, and there seems to be still room for more growth. As a result, APT is currently closer to a new ATH compared to most other coins. The picture below shows the PancakeSwap voting result. Check the yellow box.

Are There Any New Developments?

Currently, there are no big new developments on the Aptos blockchain. However, we see a general growth of the Aptos ecosystem. New projects launch all the time. Their DeFi space is growing nicely, with their TVL increasing all the time. In their ecosystem, you can find:

However, the current APT pump doesn’t seem related to new developments. The picture below shows their ecosystem page.

There appears to be no special hype going on around the Aptos network and ecosystem. No special events seem to be coming up. Still, the APT coin doesn’t seem to lose steam.

It looks like the current APT pump is due to a combination of factors. The initiator seems to have been the PancakeSwap vote. Shortly afterward, APT started to see a price increase. The current BTC pump keeps the momentum for Aptos going. We can’t pin down a specific event why APT is ahead of the rest of the market.

The current price of APT is $7.43, which 10.5% up during the last 24 hours. The market cap is $970 million. From the total supply of one billion tokens, only 130 million are already in circulation. 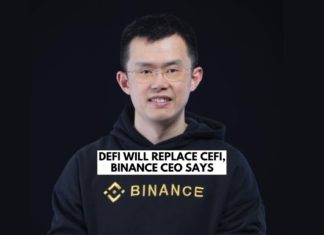