Home Cryptocurrency News Will Celsius Not Be Able to Honor Redemptions? 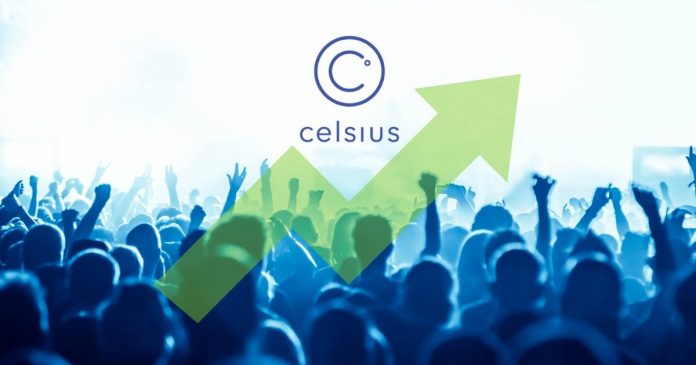 It appears that the Celsius network may have run into liquidity issues. They may be insolvent on their ETH position.

A Twitter thread by Mike Burgersburg reveals this. We doubt that this is his real name. He tends to investigate crypto projects. Furthermore, he uses the Twitter handle Dirty Bubble Media. We will have a look into his thread about Celsius, and try to separate the chaff from the wheat.

What Is the Celsius Protocol?

Celsius is a lending platform. To clarify, it is a regulated, SEC compliant platform. They offer high yields on deposits. It is also possible to receive a loan, backed by a crypto collateral. Their native CEL token powers the platform.

Can Celsius Sustain Their DeFi Strategy?

Dirty Bubble Media reported earlier about Celsius. That was back in February 2022. DMB claims that Celsius can’t sustain their DeFi strategy. According to this info, Celsius has a total of $3.4 billion in Ethereum deposits. Mostly in Aave and Compound, totaling $1.45 billion. That is 41% of their total Ethereum holdings. He can prove this via the Zapper app.

According to this information, they could lose ~$86 million per year. These are interest payments to their depositors. It’s the difference in what they pay and what they receive in interest on deposits. 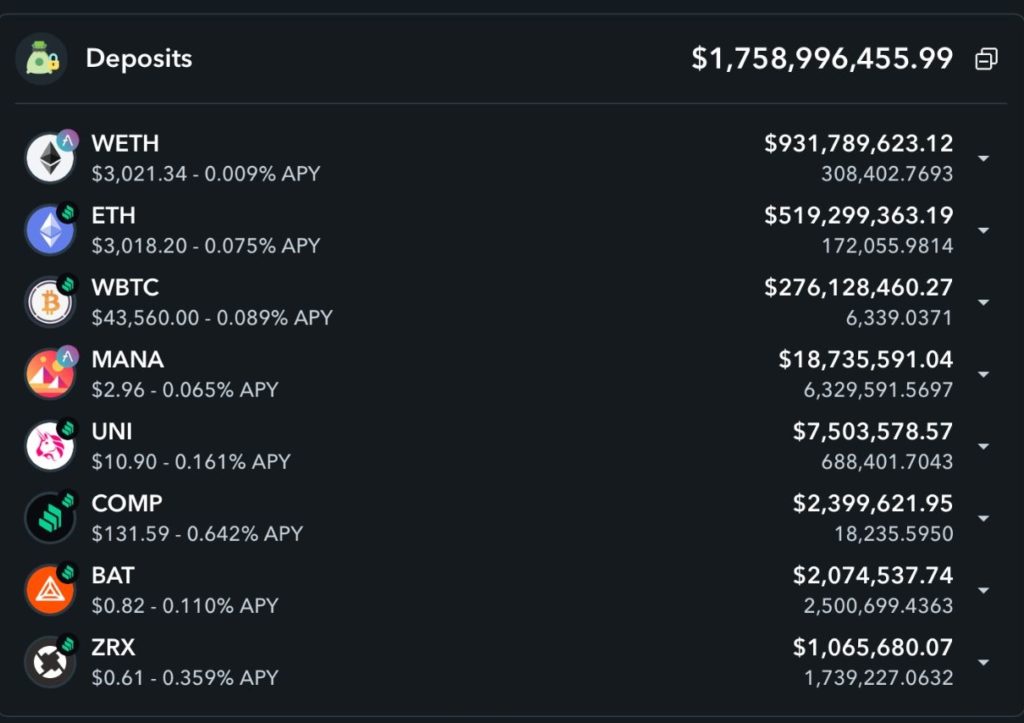 Now, in this post, he also makes assumptions. He makes calculations, that show that there is another yearly loss of $34 million. Celsius can only cover this by charging a 16% APY on stablecoins lent to exchanges. Since this only covers 40% of their Ethereum holdings, $2 billion is missing.

He also finds other major wallets. These prove that $769 million of Ethereum sits in three Celsius wallets. As of February 15, 2022. That’s another 22% of Ethereum holdings by Celsius. This ETH is not making any yield. On the other hand, they cost them 221 ETH per week. That is until the Merge materializes. 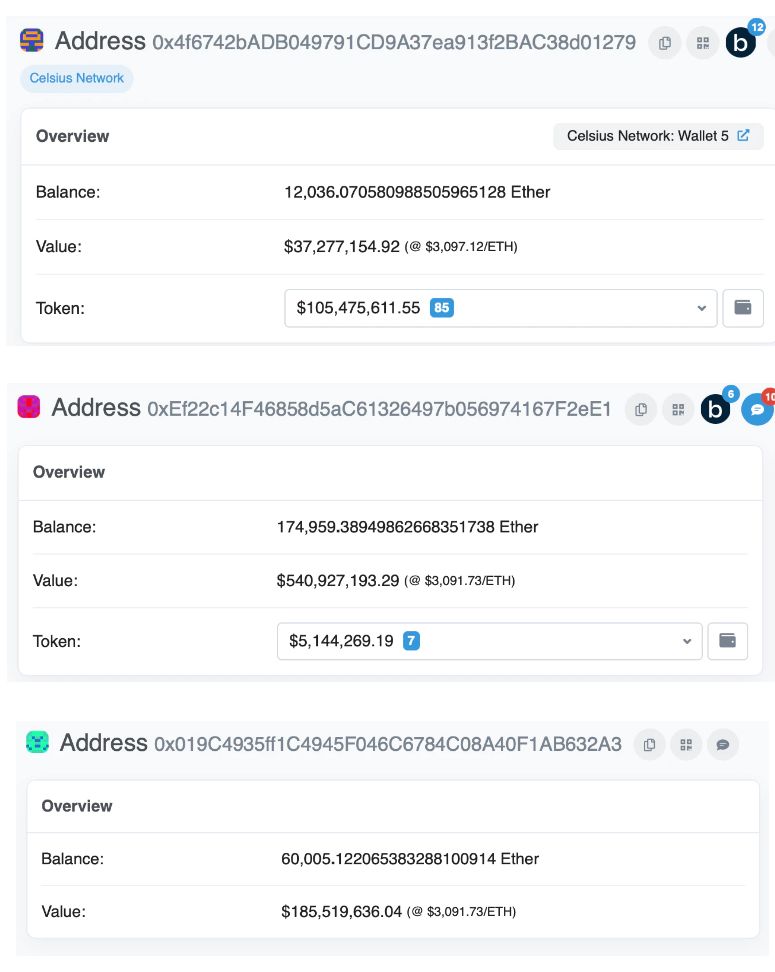 On April 19, 2022, DMB claims once more that Celsius moves ETH around. This time, once again, they move 22% of their ETH holdings. He claims they move this to ETH 2 wallets to stake. That’s a total of another 22% earning nothing for now.

However, as proof, he shows a wallet he found already on February 15, as part of a series of 3 wallets. He claimed, back in February, that they were not earning any yield.

If we look at the picture above, the middle wallet, starts with Oxef22c14f46. That seems to be the same wallet as the wallet in the picture below. But moving funds from one wallet to another wallet when they don’t earn any yield, is still zero yield at the end of the day. It’s not possible to claim twice the 22% if it involves the same wallet.

However, instead of Ether, Celsius is now adding WBTC in their Aave and Compound wallets. The total value of WBTC is just above $1 billion. As shown in the 2 pictures below.

To make things worse for Celsius, DBM made a new claim on June 6, 2022. This time he states that DMB is the first to report that Celsius lost 35,000 Ether in May 2021. That was part of the Stakehound key loss debacle. Fireblocks seem to be the real culprit here. They managed not to secure the cryptographic keys. Basically, they lost the keys. The amount at stake (pun intended) was 38,178 ETH. There is an ongoing lawsuit in Israel about this case between Stakehound and Fireblocks.

However, back to Celsius. In return for their ETH tokens, customers received the Stakehound stETH token. According to DBM, this token is almost worthless. CoinGecko confirms this. The current price for one Stakehound Staked Ether (STETH) is $33.48. A far cry from the current ETH price of around $1.750. The price of stETH crashed after details of this debacle emerged. DBM claims that Celsius holds 42,000 Stakehound STETH. According to DBM, in certified Celsius wallets.

Proof of Sending 35,000 ETH to Stakehound

Other Celsius wallets show a total of 42,306 in Stakehound STETH tokens. This indicates that Celsius has sent more ETH to Stakehound.

This happened almost a year ago. However, Celsius never mentioned that this did happen. At current rates, that is a $71 million loss. This wallet has supposedly still 11.387 ETH as of June 4, 2022. According to a June 4 Tweet, by DBM. In the same thread, he shows plenty of wallets, which are supposed to show Celsius holdings.

On the other hand, on Reddit, one poster claims that the wallets that DBM quotes, don’t belong to Celsius.

There appears to be a lot of smoke around the Celsius camp. The temperature surely seems to be rising around Celsius. Many times, there’s also a fire when there is so much smoke. However, is that what we want and need for DeFi?

The proof that DBM brings to the table seems to hold out. On the other hand, he also assumes a few things. This is especially true in his Substack article from February 15, 2022.

However, blockchain wallets don’t have names attached to them. With patience and research, you can get a long way, though. The question is, how much of what DBM claims is actually true? That is hard to say. He does put in a lot of time and effort. However, at least one time, we showed you that he claimed twice the same wallet. The percentages he claims don’t add up by doing so.

According to all these calculations, Celsius can sustain 50K redemptions per week, for another 5 weeks. If it all adds up. This could mean restrictions on redemptions if you are a Celsius user. And for the time being, we recommend you limit your positions there so you don’t get caught with an account that has less in it than you expected.

[Editor’s Note: After publishing this article, a member of the Communications team at Celsius reached out to us. This is what she had to say.

“There is a lot of misinformation and FUD online. As it is our practice, we do not comment on specific transactions or deployments, but we can confirm that we have not had any issues meeting withdrawal requests. Celsius holds more than enough ETH to meet both present and future obligations, as dictated by our comprehensive liquidity risk management framework. Both our liquidity risk management framework and world-class security infrastructure are the backbone of our company. Celsius has hundreds of wallets, the majority of which are not public, and as such, assumptions by third parties are simply wrong. Celsius’ four-year track record speaks for itself and remains best-in-class.”

We presented what we know are facts from Etherscan transactions. We also noted speculation from what is a guess and even debunked part of one of the more popular stories floating around about Celsius based on the use of the same wallet address twice as mentioned in the article above. And note that this comment does not refute any of the points we’ve made in this article except to state they can meet their redemption requests at their current levels. Altcoin Buzz stands by our article as printed. -Editor]