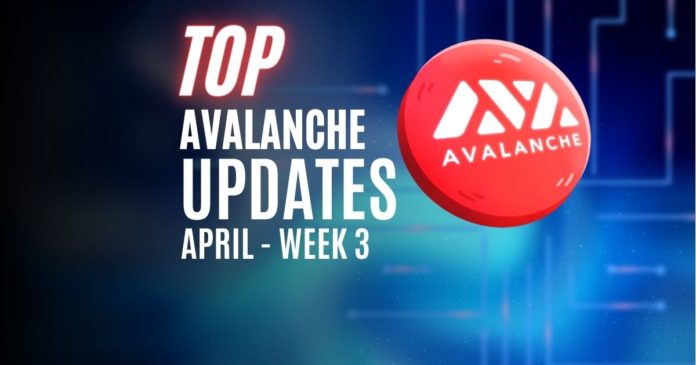 Avalanche remains one of the breakthrough surprises of the crypto community. From launching multiple projects to doubling its community, the scalable blockchain network is indeed enjoying a good year. The project currently boasts a TVL of $11.13B and ranks among the top ten blockchain projects by market cap.

April has been a great month for the Avalanche community. The platform is continuing its fine run experienced in the first quarter of the year. As the month comes to an end, here are a few events that took place within the Avalanche network.

SwissBorg is an app that enables the purchase, analysis, and staking of crypto assets. As part of its plan for expansion, the platform announced the addition of Avalanche’s native token, AVAX, for purchase and staking. As a result, users who stake AVAX can earn a 3.75 percent APR. They also have the option to boost yields to 7.5 percent.

A statement from Nicolas Rémond, CTO of SwissBorg, noted that the partnership with Avalanche is part of its plans to democratize wealth management. He said, “AVAX was very highly requested, and we’re proud to have made the token available for investment to the 600k+ users of our app, as well as giving them the opportunity to earn a competitive yield.”

The incorporation with AVAX is already active. This means that SwissBorg users can add AVAX to their assets. Although the app is not available to U.S. investors, it is available in more than 100 countries.

Non-U.S. users can now stake $AVAX using @swissborg’s Smart Yield wallet, which employs an oracle to scan for and take advantage of yield opportunities with a simple, user-friendly experience.https://t.co/AwSbm3CJZC

Avalanche is not only home to DeFi projects; the blockchain platform is also growing a reputation for housing high-performing blockchain games. The Emperor Royale game is one of the newest additions to the scalable network. The game brands itself as the first gamified, skill-based, PvP strategy game on Avalanche. It also claims to have Avalanche Rush incentives as a perk.

The game revolves around players bidding PEFI or iPEFI to take the throne from other gamers in real-time. Furthermore, each time a gamer sits on the throne, their Penguin starts accumulating time as Emperor. At the end of the competition, the players who spent the most time on the throne will receive a portion of the jackpot.

Emperor Royale is a unique king of the hill dApp featuring $AVAX rewards and CryptoPuffy NFTs.

To be released this Wednesday, April 20th! 🔥

Vesper Finance aims to make DeFi more cost-effective and accessible to the public. As a result, the platform has prioritized multi-chain expansion. The platform recently announced the use of Vesper Grow on Avalanche. Users can use Vesper Grow to passively grow their crypto on Avalanche’s network. Avalanche’s smart contracts are notably one of the fastest in the blockchain community in terms of time-to-finality.

Vesper Grow provides users with a well-audited way to earn yields on their digital assets. Additionally, Grow pools available for Avalanche’s users include USDC, WBTC, DAI, AVAX, and WETH. Vesper also reserved an extra 50,000 VSP for the first two months of operational Avalanche pools. It allocated 35,000 VSP in the first month and 15,000 VSP in the second.

To deposit into Vesper Grow pools on Avalanche, users need to have existing funds on Avalanche. Furthermore, Vesper products also exist on the Polygon and Ethereum mainnets. The platform sees DeFi’s future as multi-chain. As a result, Vesper plans to expand into more chains later in the year.

DeFi Kingdom Blossoms in a Month

Avalanche’s achievement is frequently measured by the performance of its subnets. Subnets allow developers to establish their programming guidelines for a chain. Avalanche announced the launch of its Multiverse initiative, which was aimed at increasing subnets on Avalanche. DeFi Kingdoms, a GameFi project, is amongst the many subnets to join Avalanche’s community. In less than a month, the platform has had incredible results to show for it.

Furthermore, the DeFi Kingdom subnets reportedly garnered four million transactions and achieved a market cap of $360 million, grabbing the attention of the Avalanche community. The goal for the DFK Chain on the DeFi Kingdoms subnet is to emerge as the likely spot for users and projects looking to launch GameFi.

The DFK Subnet surpassed 4M transactions and $360M market cap in just over a month. Check out how @DefiKingdoms is able to achieve high-performance using #Avalanche Subnets ⬇️ https://t.co/NYkorrPxz9 pic.twitter.com/DUBF7hYCdd

That’s it for this week’s update.

How To Install and Use the Exodus Wallet – Part I

Ruma - January 30, 2021 0
Exodus is a user-friendly, multi-cryptocurrency wallet. It was founded in 2015 by Daniel Castagnoli and JP Richardson. Using this wallet, you can store any currently...