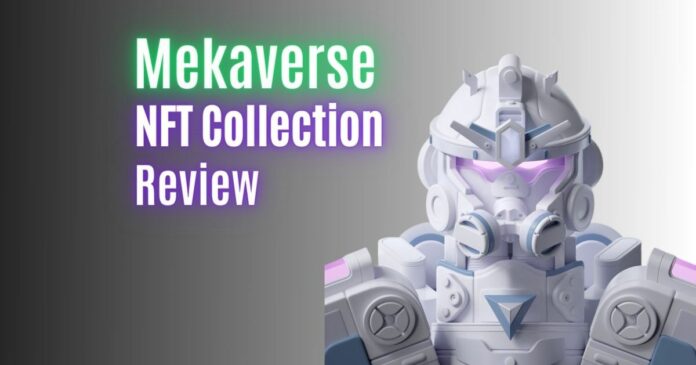 The MekaVerse collection is a series of 8,888 generated NFTs with elements inspired by the Japanese Mecha universe. The project raked in $60 million worth of ETH in less than a day since the first mint. MekaVerse is not another PFP collection; the team has ideals for the collection that goes beyond their NFTs.

But with the NFT market bleeding red and controversies surrounding the collection, can it recover to previous prices? Let us find out.

What Is the MekaVerse NFT Collection?

MekaVerse is an array of 8,888 generative NFTs drawn from the world of Japanese anime. Each NFT in the collection is a Meka. This word derives from the Japanese concept of a mecha. A mecha is a colossal war machine piloted by humans who engage in combat on Earth and in space.

According to the MekaVerse lore, there are four factions in their universe.

Each faction has its territories marked by factories. The ultimate aim of a faction member is to open the “Great Gate.” Drivers, or holders of the MekaVerse NFTs, is a nod to the fact that each Meka must have a human pilot. Evidently, the team took inspiration from the legendary Japanese mecha anime series “Mobile Suit Gundam.”

The project will reveal a collection of 8,888 mythological swords called MekaSwords. There wasn’t much information provided about it.

The team is also planning to launch a new collection called Meka Drivers. The new characters appear to have human faces and wear different outfits. They also added a new customization update making it possible to change the Meka background.

A MekaVerse extension called MekaVerse Factory allows you to find fresh artwork and collaborative projects that are exclusively accessible to Meka Drivers.

The team minted MekaVerse on October 6, 2021, for a price of 0.2 ETH. And in less than a day since the initial mint, the project raked up about $60 million worth of ETH in secondary sales. Instead of a typical open mint, MekaVerse held a raffle to secure spots for the closed mint. The project reported 172,876 different wallet owners registered for the raffle.

The traits of each Meka are generated by computer code, resulting in an entire collection of unique pieces. Mirage Meka can be identified by their sleek and aerodynamic features, while OG Mekas have heavily armored equipment and stoic features.

Gadians have a streamlined aesthetic and large conical helmets. The rarest of the four factions, F9 Mekas, are distinguished by their spherical helmets and intricate body armor.

As of now, 4,658 wallets hold NFTs of the MekaVerse collection. There are 52% unique owners. The holders include 81 whales and 769 blue chip holders.

3% of the entire collection is listed. And 213 successful sales transpired this month.

Despite the hype and noise wrapping Mekaverse, the project has also come under a fair share of controversy from NFT enthusiasts.

The creators responded to the accusations in a post via their public Discord channel. The team claims that the reveal process featured a seed system for recreating the order if necessary and a unique Python script to help with randomization. Besides, they finished the randomization process on a private server rather than a blockchain.

The team also addressed the allegations on the MekaVerse NFTs distribution.

MekaVerse is a project that would entice both generative art collectors and loyalists of Japanese mecha fiction. The presence of a burgeoning community that fosters MekaVerse’s lore is frankly impressive. The development team’s grandiose ambition and roadmap, as well as their commitment to fulfilling those promises, are noteworthy.

Can the project recover to its past glory? We can expect the possibility when the NFT market recovers and the community trusts the project as it used to. For now, tread with caution!