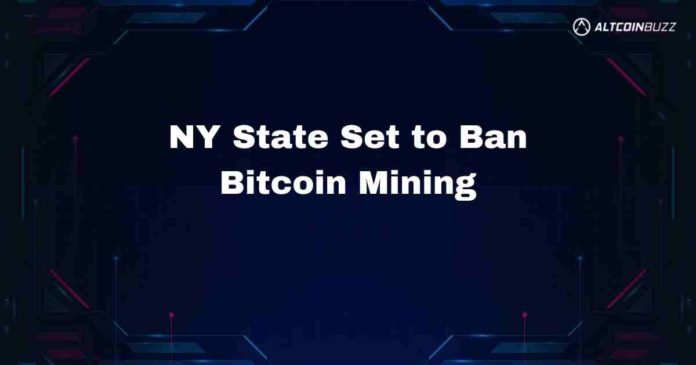 The USA has been one of the top contenders of the cryptocurrency and blockchain space. The country has put several regulations in place to restrict cryptocurrency activities. Furthermore, resulting in several crypto companies having to relocate out of the US or close shop.

Interestingly, New York takes its clampdown on cryptocurrency a step further. The US state reveals plans to ban all forms of Bitcoin and altcoin mining in its state. Notably, the bill to pass this into law recently got approved by the New York Senate. The bill is now on its way to Governor Kathy Hochul for its final approval. If approved, New York will be the first US state to completely ban crypto mining activities.

More on The Bill

The bill recently received approval from the NY senate after an early vote. Currently, only Governor Kathy Hochul stands between the outright ban and crypto mining operations in New York. The bill, earlier this year, also cleared the lower house. And is proposing a 2-year moratorium on crypto mining. Adding that all Proof-of-Work (PoW) mining operations be deemed illegal. Bitcoin and Ethereum are some of the cryptos that still make use of the Proof-of-Work (PoW) consensus mechanism.

The ban has gotten a lot of backlash from crypto enthusiasts in the state. CEO of Digital Currency Group, Barry Silbert, tweeted that the bill “[…] is a job killer and sends a terrible message to crypto entrepreneurs.”

.@SenKennedy — we're one of the biggest employers in western NY with 150 employees in Rochester and we're building a second massive office in Buffalo. This moratorium bill is a job killer and sends a terrible message to crypto entrepreneurs. Please support innovation and vote no https://t.co/ON90oeYRbc

Other agencies like the Blockchain Association also commenced a campaign against the proposed ban.

What Does This Bill Mean For The Crypto Space

It is no hidden fact that New York is popularly viewed as a leader in state legislation in the United States. Successfully passing the bill could have a domino effect throughout the United States. Other anti-crypto states may also follow suit with similar bills to ban crypto activities.

Apart from the domino effect of the bill, the US has the world’s highest crypto mining hash rate of about 38%. The crackdown on crypto mining operations in New York may subsequently result in a drop in mining activities.

However, several crypto enthusiasts are of the opinion that the crackdown will only redirect mining activities from New York to other crypto-receptive states. Since the announcement, there’s been a huge influx of mining companies in Texas. Miners and mining companies aren’t waiting for the successful passing of the bill into law before moving out of New York. Texas is one of the foremost pro-crypto states in the United States. The state also boasts of a top-notch electricity grid and renewable energy opportunities. Several top crypto firms are also setting shop in Texas citing its crypto-friendly regulations as the reason behind the move. Argo Blockchain, for example, is currently building an estimated $2 billion facility in Texas. Also, Tesla in partnership with Block and Blockstream has plans in place to set up a mining site in Texas.

In conclusion, while the ban may result in a little setback for the crypto space, New York has more to lose from the ban. As Barry puts it, Digital Currency Group is one of the “[…] biggest employers in western NY with 150 employees in Rochester.” The company is also building a second office in Buffalo. A ban on crypto mining is equivalent to a ban on innovation and development. 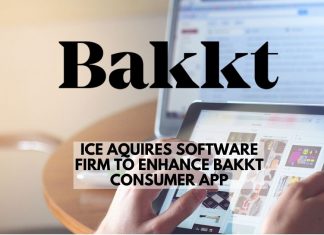 Daniel Abel - February 6, 2020 0
Intercontinental Exchange (ICE) has announced plans to acquire software service Bridge2 in a bid to accelerate the development of the Bakkt consumer application. ICE, the...