It has been another crazy week in crypto. Bitcoin suddenly dropped from $7400 to $6900 on Wednesday. Later that day, the world’s largest digital currency fell even more, ending up in the $6,4o0 region, erasing all the gains over the past 2 weeks. One of the reasons behind the Bitcoin drop, according to multiple news sources, was the fact that the major Wall Street investment bank, Goldman Sachs, had finally made known its stance on opening a cryptocurrency trading desk. According to sources, Goldman Sachs had clarified that such plans are not a priority for the foreseeable future, but rather it will be focusing its energy on a custody product for crypto that would better service large institutional clients.

One day later, however, Martin Chavez — the Goldman Sachs Chief Financial Officer — said that the news about them abandoning their plans to launch a crypto trading desk is fake. Speaking at the TechCrunch Disrupt Conference in San Francisco, Chavez mentioned:

“The next stage of the exploration is what we call non-deliverable forwards, these are over the counter derivatives, they’re settled in U.S. dollars and the reference price is the bitcoin-U.S. dollar price established by a set of exchanges”

Although, Martin Chavez declared the news was “fake news”, the damage had already been done. Bitcoin dropped and has not been able to recover since the news.

Read more about these stories here:

The Brussels-based think tank Bruegel has developed a report on cryptocurrency and ICOs regulations. This document, seen by Reuters, has been presented to EU ministers during meetings on September 7 and 8 in Vienna. The report states that at EU level, clearer ICO rules and stricter crypto exchange regulation are needed to control risks and exploit the potential of blockchain technology.

Bruegel’s report suggests that even if these rules are adopted, they won’t be fully operational in all EU member countries before 2020. Furthermore, regulations will also depend on national authorities.

China’s central bank is introducing a blockchain trading platform to assist small and medium enterprises. The Bay Area Trade Finance Blockchain Platform was officially rolled out on Tuesday in Shenzhen’s financial institutions for trial and testing. The testing phase of the blockchain trade finance platform will run until the desired results are met.

The platform is a joint project between the PBoC’s Digital Currency Research Lab and the central bank’s Shenzhen branch. Also involved in the project are the Bank of China, the Bank of Communications, and the China Merchants Bank.

Cryptocurrency and Blockchain technology has been in the recent past the hot topic in digital technologies. Many people are waiting for governments to start using blockchain and to invest in it. In this article, we take a look at the governments that are using the blockchain technology. Besides, we will take a keen look at where exactly the governments are using the technology. Whether in the tax department, motor registry, land and titles, business registration, births deaths and marriages we find out in detail.

It has been another week to remember. With Bitcoin suddenly diving below $7000 on Wednesday, many crypto investors were getting themselves ready for another big crash. This time deep into the 5k region. Luckily, the market found a way to stabilize and went back up after hitting $6150, now fluctuating between the $6300 and $6400 regions.

One of the reasons behind the downtrend of Bitcoin and the rest of the market over the course of this week has of course been the news that Goldman Sachs was abandoning its plan to open a crypto trading desk. Yet, one day later, Martin Chavez — the Goldman Sachs Chief Financial Officer — stated that the news was nothing more than “fake news”, mentioning that Goldman Sachs is not abandoning crypto. That said, a clear date on when Goldman Sachs will dive further into the crypto space has not been given.

Looking at the developments of blockchain and cryptocurrency in 2018, many people will see that the crypto space is moving forward at a very fast pace. While cryptocurrencies are still banned in China, it is good to see that China’s central bank is now experimenting with blockchain technology. Furthermore, the report from Reuters advising European governments to look into blockchain and crypto is another push towards more clarity and regulations. With more and more governments announcing that they are adopting blockchain, the end of 2018, and the year 2019, will be very interesting for sure. 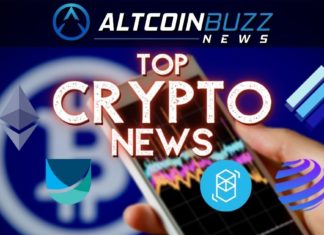 Civic Partners with 12 Automated Retail Companies to Revolutionize the Way...