While on an interview with Bloomberg, Spencer Bogart gave his thoughts as to why “now is a good time to buy Bitcoin.” The main reason for this is because he believes institutional money will now start to flow into Bitcoin due to entrepreneurial activity. Another big reason for this thought of his is because he believes Bitcoin is near/has hit the bottom.

“I think now is a very good time to buy. Is it the absolute bottom? Not sure…“It hasn’t slumped at all really in terms of entrepreneurial activity… We see more and more companies coming in every day, and higher quality [projects] too. Behind the scenes when you think of the macro environment, with rising debt levels, money printing, the tension between nationalism and globalism, and jurisdictional competition, there’s a strong case to be made that Bitcoin is the most compelling asset in the world right now.” -Spencer Bogart

This was the biggest news for the last week or so and the price reflects it. Enjin Coin has been on a tear, rising from about $.04 on February 24th to about $.104 on March 5th. The reason for this is because, on screenshots posted by Samsung, it appears that they will be using ENJ’s wallet. For the past year, it was just speculation that Samsung would include a cryptocurrency wallet on their flagship device but it seems those rumors are true. The phone is available for preorder on March 8th.

It finally happened, Coinbase officially listed XRP. Ironically the price of XRP actually dropped from about $.32 to about $.30 in the days after the big news was released, so much for a big Coinbase listing pump. The XRP trading pairs are with USD, EUR, and BTC. At the end of the day though, the XRP army finally got what they wanted, XRP on Coinbase.

Read more about XRP being listed on Coinbase here: https://www.altcoinbuzz.io/crypto-news/product-release/breaking-coinbase-pro-is-adding-xrp/

The top news of the past few weeks are the altcoins that are absolutely going on a tear, ENJ, BNB, RVN, and LTC all have experienced significant gains over the past 10 or so days. Of the group though, ENJ seems to have the biggest news, a partnership with Samsung. All signs are pointing to this partnership being true. On Samsung’s website, images from ENJ’s wallet are seen on the new Galaxy S10. While we won’t know 100% for sure until we actually see the phone released, this news looks extremely promising. Preorders for the phone go live March 8th.

Ironically, after over a year of fighting to get their favorite coin listed on Coinbase, XRP fans can finally rejoice. The coin is now able to be purchased with both Coinbase’s app and Coinbase Pro by trading with USD, EUR, and BTC. 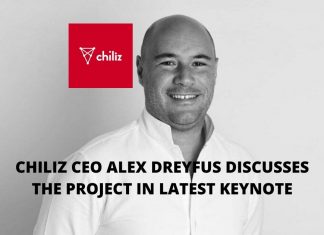 David Abel - April 4, 2020 0
Chiliz has released a full and detailed recap of the latest keynote of its CEO, Alex Dreyfus, on Tuesday.  The release of the recap was...

GraphLinq (GLQ) – Making Blockchain Data Easy to Grasp and Use