The biggest news of the week was iFinex Inc being sued by the New York State Attorney General. The AG’s department has reason to believe that the company has been using customer funds to hide a $850 million loss. If true this would be a massive hit to cryptomarkets as USDT is one of the most widely used stablecoins.

I combined these two articles together to show how complicated it would be for the Indian government to place a ban on crypto. Users have the ability to send Dash through the messaging app Telegram. Cryptocurrencies have the ability to evolve to whatever they need to be. In situations like India, privacy and adaptability are the key features. Cryptocurrencies are designed to help citizens in countries where they have little or no government trust.

While there has been a lot of talk about institutions entering crypto, these two popular companies have taken a different approach, targeting retail investors. Combine, they have about 16 million users on their platforms which can soon be able to dabble into Bitcoin, Ethereum, and Litecoin.

The Lightning Network is one of the technologies that will help Bitcoin and other cryptocurrencies scale to Visa and Mastercard levels. “Pay with Moon” allows users to buy goods and services from basically all e-commerce sites, including Amazon. While the end user only receives fiat currency, this is still a big step in the right direction. In addition, Lightning Labs has finally released their desktop application. The Lightning Network has grown significantly over the last year and will continue to grow.

Hardware wallets are vital in keeping cryptocurrencies safe. Earlier this year, Samsung released their flagship phone, the Galaxy S10, with the Enjin Wallet built into the phone. While not the first, clearly Samsung is taking a serious dive into the cryptomarkets by sending Ledger $2.9 million for funding.

The number one exchange with one of the best performing assets over the last 18 months has finally launched their mainnet. Their DEX will allow users to trade cryptocurrencies safely from their wallets. With all of the exchange hacks, it is good to see Binance move in this direction.

There was a ton of news, both good and bad, last week. Obviously, the biggest news was iFinex Inc being sued by the New York Attorney General which dropped the price of Bitcoin about 10% in a matter of just a few hours. Since then, we have held nicely though around the $5,100-$5,200 mark.

I think that getting of USDT and Bitfinex would be a very sharp double edge sword for the space. On the one hand, the space could be on its way to getting rid of some bad actors, but on the other hand, there is a lot of money in USDT. It wouldn’t be a good headline for the space and would potentially scare more users out of the markets, thus dropping the price significantly. The good thing about crypto though is that we, as a group, decide the future. Will users accept what USDT and Bitfinex are or will they turn their backs to them and move forward with more trusted coins/platforms? Only time will tell.

The other big point is how India is considering banning cryptocurrencies. On the surface, this sounds horrible. In practice, however, it isn’t that easy. Since 2014 users have had the ability to send Bitcoin through SMS and emails. If a government were to ban crypto, how could they possibly stop it being sent through emails and text messages? Crypto has the ability to be able to morph and evolve to what it needs to be to survive and thrive. Taking away one way to transfer crypto doesn’t mean it can’t be sent in many other different ways. Dash is proving that in Venezuela and Columbia by having Dash be able to be sent via Telegram using Dash Text. 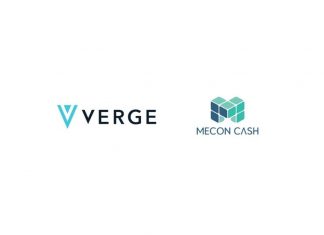 David Abel - May 25, 2020 0
Verge Currency (XVG) has recently partnered with MeconCash, a tech giant in Korea. This partnership will increase the use of Verge currency on MeconCash and...