Home Cryptocurrency Regulation Everything About the XRP Lawsuit – Part 2 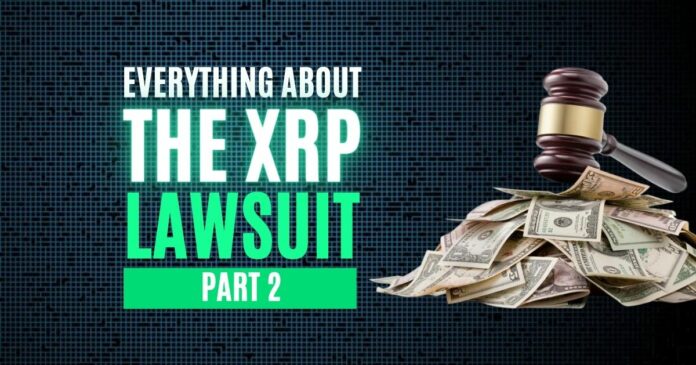 The protracted legal battle between the Security Exchange Commission (SEC) and the blockchain company, Ripple,  has been going on for almost two years. The lawsuit, filed on 22 December 2020, accused Ripple of raising $1.3 billion through illegitimate means.

If the SEC triumphs in the legal dispute, XRP will be considered a security in the US. It could create a legal precedent that leads to the classification of similar cryptos as securities. Therefore, the XRP Lawsuit is crucial for all parties involved in the crypto industry, including investors, blockchain pioneers, and lawmakers worldwide.

What Happened With the XRP Lawsuit?

It has been nearly two years since the xrp lawsuit. Both parties have persisted in making their claims in front of judge Analisa Torres of the US District Court for the Southern District of New York.

The dispute has reached a critical juncture since both parties filed petitions for summary judgment in mid-September. A summary judgment is a legal term used when one of the parties involved in the case feels they have enough information to conclude the case without holding a trial.

The court is to decide the most significant issue in the case: if XRP is required to register as a security under the Securities Act. Should the court grant summary judgment concerning this issue, it will effectively have settled the case.

Also, numerous rulings and developments that Ripple has seen indicate that a summary judgment would be unquestionably advantageous for it. Among these, the most recent is Coinbase’s application to file an amicus brief in support of Ripple.

The exchange, one of the largest and most reputable in the world, will offer testimony and evidence in support of Ripple’s claim that the SEC failed to give adequate warning that XRP would be considered a security.

11 organizations have now filed an amicus brief in support of Ripple, including:

Who Will Win the XRP Lawsuit?

In the litigation, the odds aren’t on SEC’s side, and the scales of justice are tilting towards Ripple. But we can never be sure.

There are encouraging signs for Ripple, including its CEO Brad Garlinghouse publicly expressing his confidence in the lawsuit and the company’s preparations for an initial public offering (IPO) once the dispute is over.

There is also a lot of professional legal opinion that the SEC never had a good case to begin with, which points in favor of Ripple getting a favorable result. But, lawsuits are always unpredictable. Maybe the SEC can produce game-changing evidence.

But one thing’s for sure, if the ruling goes in favor of the SEC, it will numb the sentiments of all crypto enthusiasts and trigger the interest in the technological advancement of the blockchain industry to wane.

And if the judgment favors Ripple, less stringent regulations will be in effect. It might also imply that other countries follow suit and take the initiative to encourage the development of the crypto space.

Why Does XRP Have a Lawsuit?

Ripple Labs made its debut on the fintech scene in 2012 with the reassuring promise of offering financial institutions quick and inexpensive cross-border money transfers. To make it possible, the company developed the RippleNet network, which enables real-time settlement and clearing of transactions made using the cryptocurrency XRP.

However, over time, XRP expanded beyond the cited application. Ripple Labs sold XRP tokens between 2013 and 2020 to raise USD 1.3 billion in funding.

#Coinbase has filed an amicus brief in support of #Ripple Labs in the #SEC lawsuit over $XRP. https://t.co/3vdfCstNiS

There were no indications from the Securities and Exchange Commission (SEC) that Ripple was under investigation until the SEC filed a lawsuit against Ripple Labs around the end of 2020.

Ripple executives held an initial public offering (IPO) of XRP. The SEC alleges that Ripple raised funds by selling XRP tokens to investors in the US and abroad through unregistered security offerings. The lawsuit alleges that Brad Garlinghouse, the current CEO of Ripple, and Chris Larsen, the co-founder and former CEO of Ripple Lab, had personal unregistered XRP transactions totaling over $600 million.

Moreover, by failing to register their XRP offers and sales or meet any exemption requirements, the defendants broke the registration restrictions of the federal securities laws.

Ripple Labs did not respond to the SEC for more than a month. However, the blockchain startup promptly used Twitter to clarify its stance.

The SEC’s attack, according to Garlinghouse, was not just against Ripple but the entire blockchain sector. The Ripple CEO further said that as US investors made up only 5% of Ripple’s market capitalization at the time, their impact on the market and regulatory watchdogs was minimal.

Following the online altercation and many clarifications in the form of blog posts and tweets, Ripple officially filed its response in a 93-page document that cited four counterarguments.

Is XRP Lawsuit Over?

It is now a watershed movement for the XRP and the crypto world. The lawyers outside the crypto industry tend to agree with the points made in the Blockchain Association’s amicus brief. If the bench accepts the arguments, they will provide XRP, other coins and tokens in a similar situation, and the exchanges that trade them a regulatory exemption from the securities definition.

One possible consequence is that Ripple, which has declared its willingness to settle, pays a substantial fine. However, Ripple would need an agreement or ruling that XRP is not a security. This result would probably enable the relisting of XRP on digital asset exchanges like Coinbase.

There is a crucial issue of time to be considered. Final briefs are supposedly due by the end of the year. However, it appears that the SEC may revert to delaying strategies because it has stated that it needs more time and “pages” to respond to the friend of the court briefs proffered.

In any case, the protracted conflict is coming to an end. Each side has submitted and reacted to a brief seeking summary judgment in its favor. Based on media and Ripple representatives’ timeline predictions, the litigation will probably resolve in the first quarter of 2023.