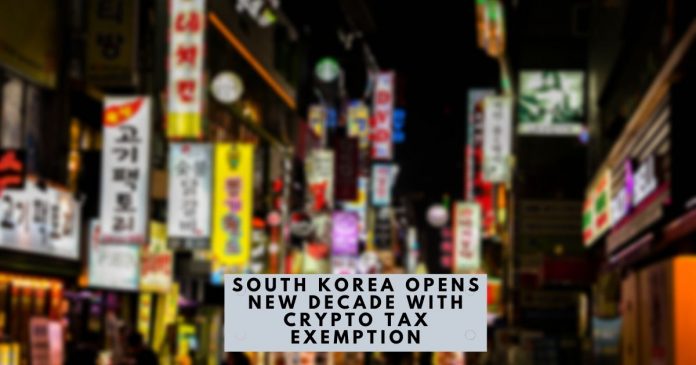 South Korea Ministry of Finance and Strategy has revealed that the nation won’t tax profit from cryptocurrency trading.

Based on reports, the South Korean government noted that under the present tax laws taxes won’t be levied on cryptocurrency trading. At the moment, the Asian country hasn’t explicitly defined terms like “virtual currency”. Therefore, profits from transactions like that can’t be taxed.

The Ministry of Finance and Strategy said: “Profits from individual virtual asset transactions are not listed income and are not taxable.”

The South Korean Ministry of Finance and Strategy also gave hints that the tax exemption on cryptocurrency profits won’t be around for long. In the near future, the government plans to amend the tax law so they can be taxed.

Importantly, the crypto community expects South Korea’s government to give a precise definition of crypto assets. Also, clearly stating whether profits get classified as capital gains. As well as how to properly maintain trading records for law enforcement.

Besides, an official in the Ministry of Finance and Strategy revealed that the meetings took place already. Thus, it plans to release the revised tax bill in the first half of 2020.

“We’re preparing a taxation plan for virtual assets by comprehensively reviewing the taxation of major countries. Their consistency with accounting standards. As well as, trends in international discussions to prevent money laundering,” the ministry said.

The publication revealed that the government collects tax on capital gains for every deal. While tax for miscellaneous income gets collected once a year. Therefore, if cryptocurrency profits get classified as capital gains, the government will need to receive every trading record from domestic exchanges.

However, a tax professor at Kangnam University, Ahn Chang-Nam, said that it’ll be difficult for the government to know about every crypto transaction. Hence it would be better for the NTS to categorize gains from crypto-asset trading as miscellaneous assets.

David Abel - October 23, 2020 0
On the 21st of October, PayPal announced the release of a new service which will allow users to engage with cryptocurrency. PayPal, in an official...

Will This Project be the Next Big Thing in Digital Connectivity?