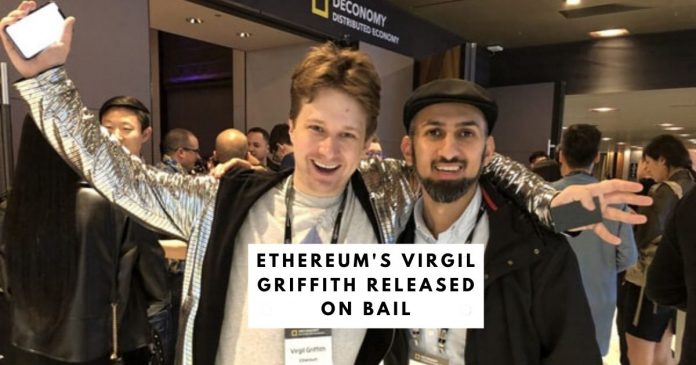 Ethereum’s research scientist Virgil Griffith has been released on bail.

According to reports, Virgil Griffith’s release forms were ready on the 6th of January. To remind, he got formally indicted for allegedly breaching the International Emergency Economic Powers Act (IEEPA). The Act prevents US citizens from circulating information, goods and services to the Democratic People’s Republic of Korea without written approval from the Treasury.

However, Virgil Griffith’s lawyer, Brian Klein mentioned the court didn’t need an official indictment in the first place. He said since an agreement already stood concerning his bail. Therefore, the court shouldn’t be locking him for ten more days. He also confirmed that the defendant plans to question the decision and elucidate facts and details at the time of trial.

During the whole process, Virgil’s first request to grant bail got denied. But later on, the court accepted his appeal on the condition that his family puts up a $1 million bond. Therefore, on the 30th of December, Virgil got granted bail. He remained in prison for ten more days.

Besides, the conditions for the bail include a $1 million bond secured by the homes of his father and sister. Also, he’s free to access his emails with his lawyers. As well as, use his passport card for travel (though pending an Alabama state ID).

During Griffith’s lawsuit, the Ethereum Foundation quickly distanced itself from the whole controversy. Also, saying that Griffith traveled purely for personal reasons.

Quoting the foundation: “The Foundation’s aware of the recent charges filed against Virgil Griffith. We can confirm that the Foundation was not represented in any capacity at the events outlined in the Justice Department’s filing and that the Foundation neither approved nor supported any such travel, which was a personal matter.”

However, the co-founder of Ethereum, Vitalik Buterin came forward to defend Griffith. He pointed out that it’d be wrong to take the convenient path of throwing Virgil under the bus.

Besides, Buterin emphasized that he doesn’t believe Virgil gave North Korea any real help in doing anything bad. Buterin said Griffith delivered a presentation based on publicly available info about open-source software. Thus, he didn’t give any hackery advanced tutoring. “Virgil made no personal gain from the trip,” he said.

Furthermore, hammering on Griffith’s innocence, Buterin said if any chance existed that Virgil’s speech involved advanced hacking or anything wrong, his reaction would be different. He’d also be strongly against it.

The Ethereum’s co-founder also pointed out that Griffith helped Ethereum a great deal. He said his virtue of paid off in the past in multiple contexts. Pointing out situations like improved relations with Ethereum Classic and Hyperledger.