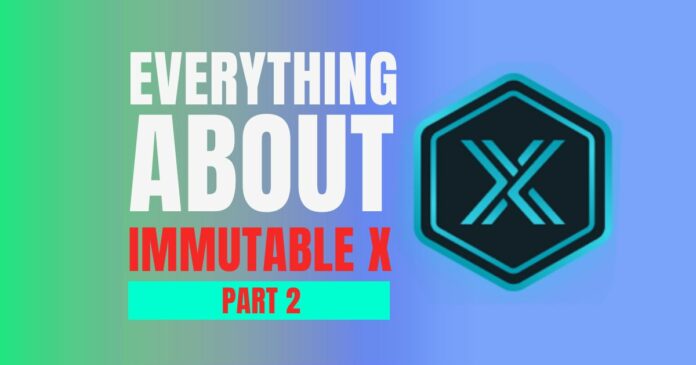 This is the second part of the article. Read the first part here.

ImmutableX is an Ethereum layer 2 scaling solution. Intending to enable a gas-free NFT environment that allows users to build and develop their decentralized apps, such as games and marketplaces.

To say the years 2021 and the beginning of 2022 were monumental for the NFT ecosystem would be an understatement. Let’s make a deeper research about Immutable X.

Problems of the NFT Sector

The trading volume for non-fungible tokens (NFTs) was as high as $17 billion in January 2022 alone! But with high trading volume comes high gas fees. ImmutableX could offer a solution in this regard.

Many NFT enthusiasts hoping to get into a project had to engage in gas wars, often paying more than double or more the money in gas to secure an NFT.

The inflated gas fees make many NFT investments a loss-making business. It is a grave issue that needs to be solved. And it ultimately led to the creation of Immutable X, a layer-2 scaling solution on Ethereum for NFTs.

Grab your favourite NFT without friction on the Immutable X marketplace https://t.co/BaK0poYkZj

ImmutableX is an Ethereum layer 2 scaling solution. Intending to enable a gas-free NFT environment that allows users to build and develop their decentralized apps, such as games and marketplaces.

While still leveraging Ethereum’s security and network effectiveness, it can support up to 9000 transactions per second.

ImmutableX is an open-source ZK Rollup protocol. Zero-knowledge rollups (ZK rollups) are an Ethereum-scaling tool that ‘rolls up’ batches of transactions, processes them on a different layer-2 blockchain, and then feeds the processed transactions back into the Ethereum blockchain as a single transaction.

These rollups reduce transaction costs and speed up processes while enabling a network to benefit from network advantages and security offered by the main Ethereum blockchain.

Powering the next generation of web3 games

Within the first week of our launch with @GameStopNFT Marketplace, we've reached $5,000,000+ volume traded #onIMX pic.twitter.com/sOMMF0e588

On the other hand, $IMX is the native utility token and is used to pay transaction fees. The NFT collectors don’t need to own the IMX, as the platform will convert 20% of the sale into the token.

It is also a governance token used for proposals for the future of ImmutableX. Each IMX token represents one vote. So, users can also stake their $IMX. The staking reward pool receives contributions from all transaction fees. Also, users who stake IMX are eligible for shares in the pool. Additionally, those that trade on Immutable X will also receive the token.

To sum up, you can use the $IMX token can use it to:

Is Immutable X a good investment?

With more than 70% of the total NFT volume concentrated on Ethereum, it is the dominant hub for NFT activity and trading. And with the advent of the Merge, Ethereum will likely maintain its position.

If Ethereum wins the Layer-1 battle, as the first-mover/winning Layer-2 NFT marketplace built on ETH, ImmutableX would be nearly irreplaceable over the long term.

Building a platform for gasless NFT transactions goes far beyond the current market of digital art trading. Robbie Ferguson, the Founder of Immutable X, wants $IMX to be the back-end technology for all future NFTs.

ImmutableX has minted over 54M NFTs and traded over 9M NFTs in 2022. Zero gas mint has a substantial appeal for an NFT enthusiast. More importantly, NFTs on it are 100% carbon neutral.

Today, @immutable has enforceable protocol-wide royalties on our L2.

Announcing "Immutable Royalties": extending this option to ANYONE on Ethereum. 🫡 🅧

Guaranteed royalties are *non-negotiable* for this industry to become mainstream appealing.https://t.co/WKmk04DRQl

As an outcome of its ICO on CoinList, Immutable X raised $12.5 million in less than an hour, followed by $60 million in Series B funding from top trading firms such as Bitkraft, Alameda Research, and Galaxy Interactive.

The token has seen a severe sell-off in 2022. And with all the turmoil in the crypto market, it lost more than 90% of its value from ATH. The project has a solid road map centered on constantly developing and growing the Immutable X ecosystem.

A critical aspect of the Ethereum blockchain is scalability, which Immutable X provides with its highly functional platform. And the project will grow as it gains more partnerships with more titans in the field.

They have raised the fund to $500M with the help of other ventures and business behemoths to accelerate the growth and success of web3 projects & games built on Immutable X. Also, they have already granted support to over 100 projects in web3.

Gods Unchained, Moody Krows, Landloot, and AstroBros are among the earliest projects and collections launched on Immutable X. Additionally, commercial entities such as Tiktok and Stardust have adopted the protocol.

Immutable X’s API and SDK set to enable easy integration into many existing commercial platforms. It bodes well for Immutable X, as major social media giants are interested in entering the NFT and metaverse ecosystem.

To sum up, Immutable X has a mature ecosystem and strong financial support, making it one of the most reliable platforms in the NFT space.

The Ethereum Virtual Machine, initially presented in the Ethereum Yellow Paper and later amended by several Ethereum Improvement Proposals (EIPs), is the runtime environment in which Ethereum transactions are executed.

Released in 2015, the EVM was the first Turing-complete blockchain virtual machine. Although it has numerous design flaws, EVM has a significant competitive edge thanks to its tremendous first-mover advantage and subsequent widespread adoption.

Our staking rewards cycles continue to be above 20% 💎

So, among all smart-contract infrastructures on the market, it is by far the most reliable. Many later blockchains adopted this runtime environment because of Ethereum’s supremacy. Any blockchain that doesn’t support the EVM risks falling further behind as the EVM ecosystem grows.

Unfortunately, Immutable X does not support EVM. But they have plans to use Warp, a Solidity to Cairo transpiler, in the future. 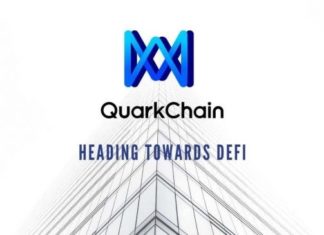 Deepika Garg - September 12, 2020 0
The blockchain industry has been seeking a scalability shift for a long now. QuarkChain is one of the top contenders addressing the lingering scalability...

New Bitcoin Fund is In the Works, Says Michael Novogratz

An Intro to the Spinamp NFT Music Player