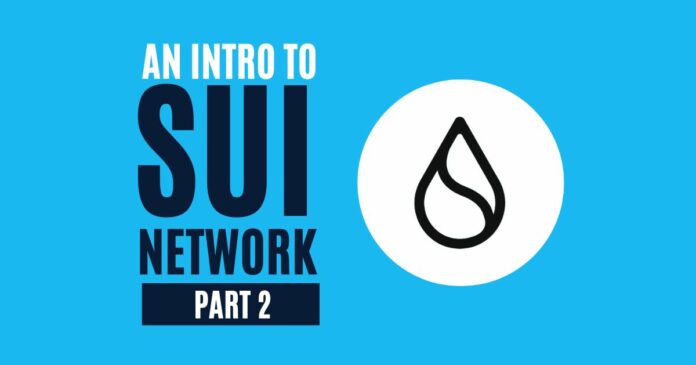 This is part 2 of the intro to Sui. Here is Part 1 in case you missed it.

So, let’s have a look at what the Sui Network is about.

The Sui Network and Aptos have a few things in common. Their respective teams worked at Meta. They both offer a high TPS, up to 160,000 TPS. And they both use the Move coding language. But that’s about as good as it gets. Sui is a complete independent L1 blockchain. They also use different ideas and technologies. So, let’s have a look at those differences. We are going to show you 3.

Interested in running a node on #Sui? Check out the guide from @Scale3Labs 👇 https://t.co/mGeJFrTJwH

The Sui Network uses this differently. They use a different architecture. Aptos uses a BFT algorithm, which is executed by their Block-STM engine.

On the other hand, Sui uses Narwhal and Tusk. These are a DAG and a consensus algorithm. This way they can process transactions in parallel or sequentially. It depends on how complex a transaction is. They use a Byzantine Consistent Broadcast for this. This is a novel technique that bypasses Global consensus by validators. However, it doesn’t compromise security.

A downside for this is that they need to keep a larger codebase. Senders can also only submit one transaction at a time. Still, this doesn’t influence their expected TPS. The following video shows the difference between Sui and traditional blockchains.

Aptos has a similar set-up. However, they label tokens, NFTs, or other assets as ‘Resources’. They label code as ‘Modules’. To clarify, one has data but no code. The other one has code, but no data.

Sui, on the other hand, stores data as ‘Objects’. This way, it can determine ownership more clearly. For instance, as mutable/immutable or owned/shared. So, what stands out here, are the ‘shared objects’. This means that anyone can read or write a shared object. This is in total contrast to an owned object. Only a single writer can access this.

Also, Sui’s devs have now the option between specific use cases where they can use owned or shared objects. So, owned objects are simple transactions. They don’t need to go through the network-wide consensus. As such, they are latency boosters. Here’s a more in-depth explanation of this topic.

What do Sui and Aptos have in common with Solana? All three use heterogeneous validators. They maximize the network capacity. However, there’s a bottleneck in the form of ‘state growth’. That’s the CPU and storage capacity needed to store the entire history of the blockchain. The longer a blockchain is active, the more often validators must update their hardware.

Sui uses sharding for this. They use Narwhal for this. They can scale the network by adding more machines, which validators run. As a result, scalability increases because more validators are in action. They validate the network. Currently, Sui is still in devnet mode. Lots of testing to do. The picture below shows some of the innovations Sui works on.

How to Convert SUI to USD?

Well, at the time of writing this article, you can’t. At least, not yet. The Sui token should see the light of day by the time the mainnet goes live. As already mentioned, expect this to happen in early 2023.

However, once the SUI token launches, I expect that many major exchanges will list the token. From there, it won’t be difficult to convert SUI to USD. We will get back to this topic once the token and mainnet launch.

Be aware that there is no SUI token yet. In other words, there are many scammers out there, trying to make you believe that there is a token. Don’t fall for these pranks. Only follow official announcements from the Sui team. This includes anything related to their token release.

We love seeing the excitement in the Sui community lately! But we're noticing new scams + misinformation regarding Sui airdrops and tokens.

🔷SUI token is not live, listed, for sale, or obtainable anywhere

🔷And currently, we have no plans for an official airdrop

This is the second part of our introduction to the Sui Network. Here we have a closer look at how Sui and Aptos differ in architecture. We expect the Sui mainnet during early 2023. In the meantime, you can join their devnet and test their ecosystem projects.