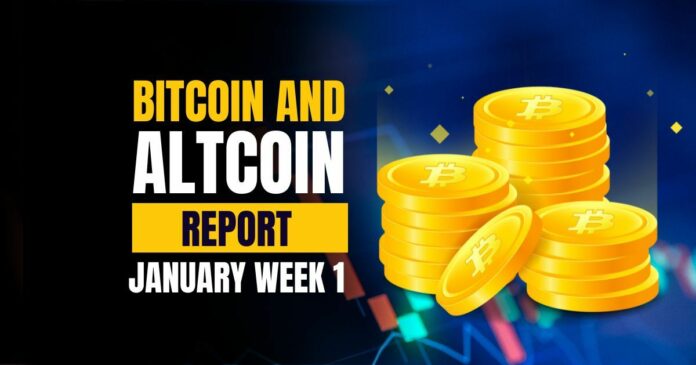 Will 2023 extend crypto winter and evolve into a crypto ice age, or is a spring thaw coming? Here is a glance into 2023 and crypto-related investment opportunities.

Understanding and analyzing patterns can help us to prepare for the future. Also, staying up to date with all the crypto information is part of the ethos of good investors. Unfortunately, not everyone has the time. Therefore, this weekly Bitcoin and Altcoin Report will give you a holistic view of the previous week in crypto and a glimpse of the coming weeks.

When seen as a whole, the entire digital ecosystem displays the Pareto principle or “80-20 rule” for transaction fees, with Ethereum claiming 80% of them. BNB Chain accounts for 80% of the remaining, further demonstrating the dominance of smart contract chains. By contrast, the leading simple transfer models, like Bitcoin, Dogecoin, and Litecoin, only account for minuscule fees.

So, demand is still clustered on blockchain infrastructure and applications for digital assets due to the absence of significant global adoption of digital currencies. Here is a chart about it: 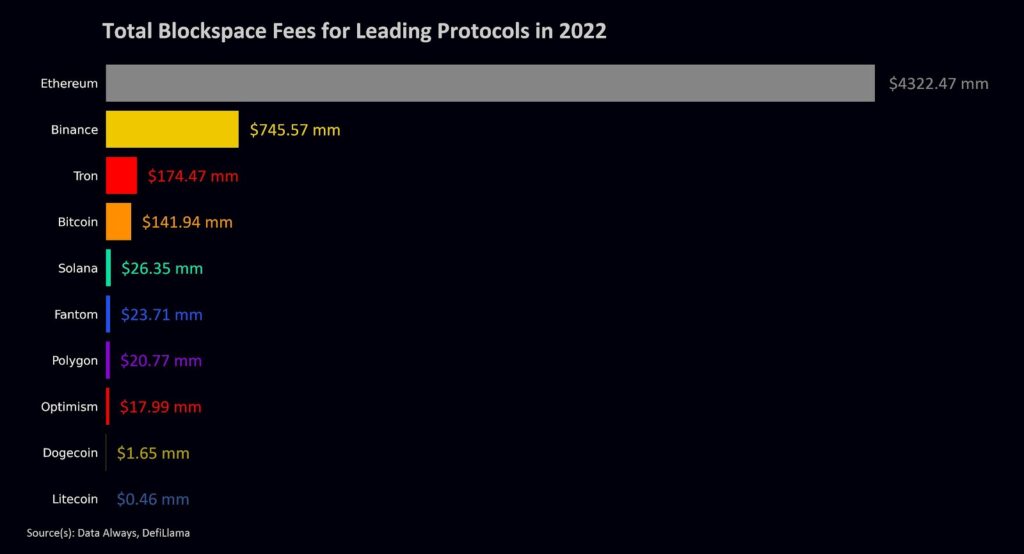 Tron, which beat out Bitcoin for third place on the block space demand podium while having a subsidized transaction style, was the biggest surprise of the year. It’s crucial to note that there is no correlation between Tron’s fee revenue in 2022 and that of other large chains. 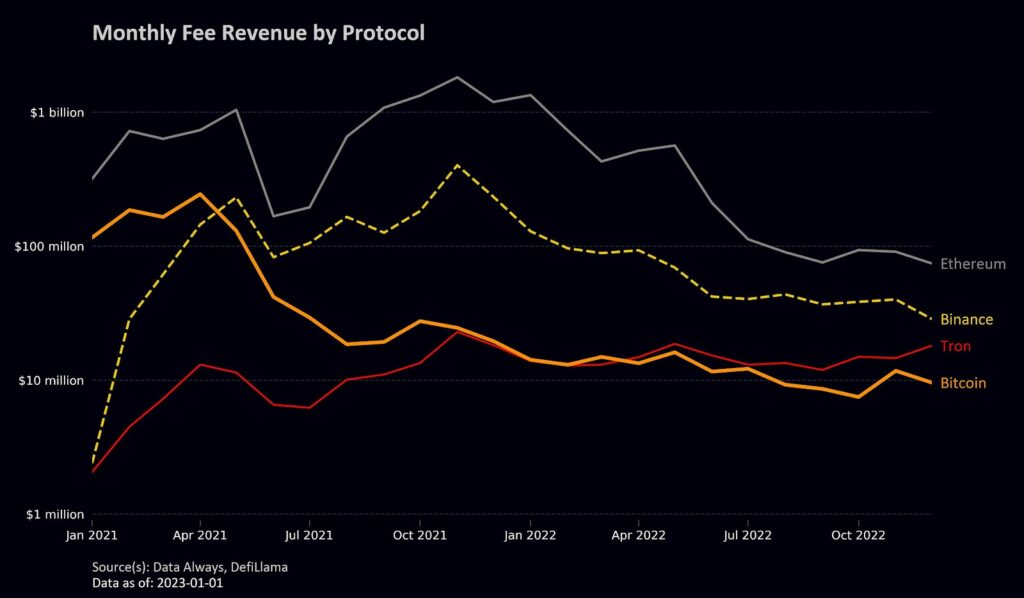 Tron fees remained virtually constant throughout the year, while Ethereum, Binance, and Bitcoin witnessed significant drops in fees. Its capture of low-value USDT transfers has been one of the predominant fee drivers and possibly the most substantial facet of the ecosystem.

Also, Tron has served as a sanctuary for people frequently burdened by the gas fees of Ethereum, especially in the developing world. It showed the best performance of the top crypto assets in 2022, driven by its domination in USDT transfers.

The State of Layer 2s

Influencers on Ethereum have projected that layer 2 protocols would start to be used actively around 2022. Although there was modest growth, especially in Q4, and it’s fair to say that adoption was unimpressive, influencers are already switching from L222 to L223.

In the end, the community is accountable for the inefficient adoption, but there were also significant development barriers:

Despite expectations, layer-2 protocols had a successful year in 2022.

The proportion of gas utilized by L2s tripled in an ecosystem where demand for gas fell across most applications. GMX, based in Arbitrum, emerged as a significant player and started generating a boatload of fees. To such an extent that GMX fees topped Bitcoin fees in Q4-2022. 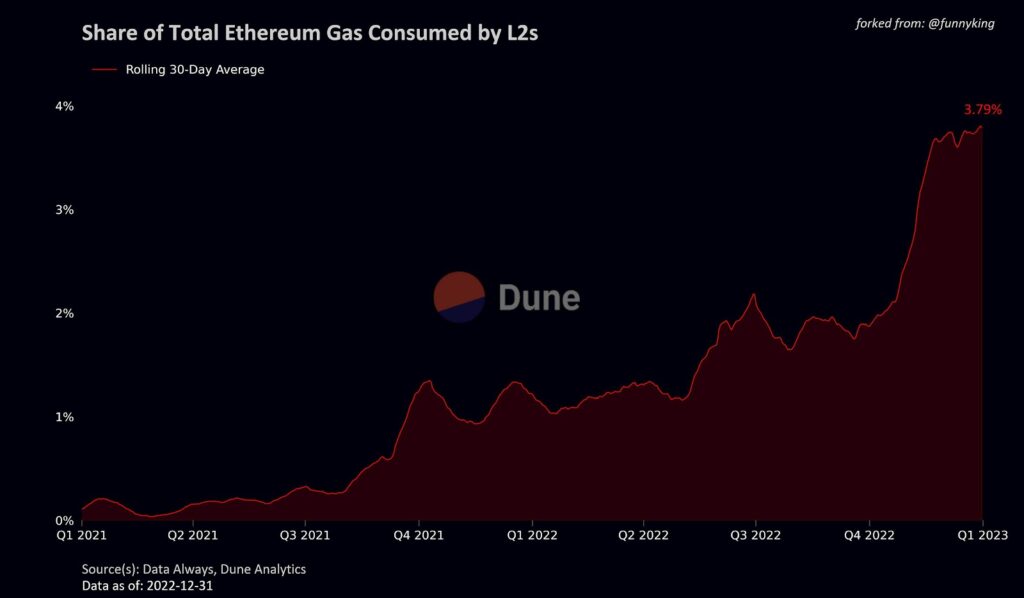 Bitcoiners should be optimistic about Ethereum L2s as the demand for Vanilla Ether transfers on the mainnet has significantly decreased over the past two years, with relative L2 gas usage increasing from virtually nothing to 60% of the current demand.

If the Lightning Network ever manages to acquire substantial traction and create decentralized apps that the community can support, it will go a long way toward reversing the downturn in Bitcoin block-space demand. Aside from addressing difficulties with cyclical transaction fees, which could cause instability as block rewards continue to decline, this base load of demand could also tackle many obstacles.

L3 Blockchains are the Future?

Ethereum’s scalability is enhanced by Layer 2s (L2s) since they reduce gas costs and boost throughput. Tradeoffs arise because of these scalability variables, and L2s must decide which elements to optimize.

Built on L2s, Layer 3s blockchains (L3s) are application-specific chains designed to reduce these tradeoffs and make even more advancements. They are comparable to app-chain environments like Cosmos, Avalanche, and Polkadot, but with the benefit of being constructed using a modular blockchain protocol stack, in contrast to a monolithic one.

The #Interchain is moving towards having more Layers to launch your business like:

This is the way: Open-Economy ⚛️ pic.twitter.com/rTxRy9e2MS

The monolithic app-chain ecosystem period will thus end with the deployment of a completely modular blockchain infrastructure stack that incorporates a general-purpose L2 with customizable L3s, ushering in a new era of decentralized application development.

How L3 Blockchains are Optimizing L2s?

For instance, an L3 can save 10,000 times more money than an L1, whereas an L2 saves 100 times more than an L1. The zkPorter L3 from zkSync, which has a 100x fee reduction and 20,000+ maximum TPS, is being developed as a real-world implementation. So, L3s provide enhanced performance with flexibility tailored for specific uses. It includes creating unique DA models, including privacy elements into ZKP use, and providing effective interoperability solutions.

Nearly all EVM L2s plan to create customizable L3s on top of their L2, but there are still significant interoperability issues, especially concerning cross-rollup transactions. But things are moving forward, and we can expect L3s to be accessible by the end of 2023.

Deploying app chains built on a modular blockchain tech stack will end the monolithic app-chain thesis if L3s can resolve interoperability problems. L3s will improve speed and scalability while preserving some of Ethereum’s security. They also let Dapps tailored to specific use cases. Cosmos and other app-chain ecosystems are well-positioned to gain ground in 2023.

The future of blockchain scalability is here! But what are zk-Rollups, zkEVM's, L3's and modular blockchains?🧐

A deep dive that you can actually understand. It's time to level up your knowledge 🧠👇 (1/27) pic.twitter.com/iTVI8noL7R

However, the app-chain narrative will shift from monolithic to modular ecosystems with the eventual implementation of L3s in 2023.

With all that said, what has 2023 in store for ETH? The market for layer-1 blockchains has saturated due to the recent rise in alternative layer-1 blockchains. At the same time, many in the crypto industry doubt the necessity for more block space.

So, despite the trend toward long-term core protocol ossification, Ethereum’s Merge has bolstered the argument for ambitious future upgrades. Given that practically all networks are vying for the same pool of investors and users, this supports Ethereum’s narrative of becoming the leader in a multichain era.

However, as the network depends on layer-2 scaling strategies to expand its block space, Ethereum’s dominance may still be threatened in other ways. It involves, among other things, centralized sequencers, a lack of fraud safeguards, and a lack of cross-L2 compatibility.

People frequently set resolutions at the beginning of every year. These often center on improving one’s health- mental and physical. But for us in this space, it’s decentralization.

The time has come to reinforce the fundamental ideas that brought us all together in the first place. We should emphasize the relevance of immutability, decentralization, and transparency.

This was the NEWS

Chris Perrotta - February 12, 2019 0
In “This was the NEWS” we take a look at the most important news of last week. What has happened in the crypto space...