Blockchain technology is exceptionally private but the ledger itself offers unrivaled transparency. Effectively, all the data recorded in the ledger or the smart contracts are accessible to anyone. While the regulatory bodies are happy about this, the businesses will not be comfortable adopting a technology that opens their books to the competitors.

Here comes the concept of privacy-focused blockchains. But the point is that an extremely privacy-focused blockchain does not serve the purpose for the regulators. Well, to build a democratic blockchain platform for both regulators and businesses, a mid-way needs to be worked out. Basically, a platform that is the right balance of transparency and privacy needed by the world. This is what Secret Network is trying to achieve.

The brilliance of Secret Network is:

Secret Network is a privacy-first blockchain that provides data privacy by default. The project is focused on solving privacy issues. It achieves so by helping secure and scales the decentralized web.

Furthermore, Secret is the first blockchain that supports encrypted inputs, encrypted outputs an encrypted state for the privacy of smart contracts.

Interestingly, even the nodes that are executing these contracts cannot invade the privacy of Secret smart contracts.

Secret mainnet is a proof-of-stake-based blockchain based on Cosmos SDK / Tendermint. As a decentralized network secret nodes or computers, it utilizes trusted execution environments (TEEs). While TEE is a secure area of the main processor, it acts like a data processing black box. Effectively, the TEEs enable secure, private computation over encrypted data.

As the Secret blockchain is based on Cosmos SDK / Tendermint, it owns independent consensus and on-chain governance. Along with that, it has features like reward delegation and slashing that makes it possible to disincentivize or penalize a node when it goes offline. Additionally, the network is secured by the native coin Secret (SCRT). Moreover, the network validators need to stake SCRT, it is used to pay the transaction fees and carry out governance tasks.

Currently, while using the decentralized blockchain, users need to compromise on their data privacy. Secret Network advances privacy as a human right by eliminating data monopolies and protect freedom. Some of the use cases are:

What is the relationship between Enigma and Secret Network?

Two MIT graduates founded Enigma in 2014 as a layer-2 scaling solution for Ethereum. This also added privacy to smart contracts. Enigma launched its mainnet on 13 February 2021, and in the same year rebranded it to Secret Network. Technically speaking, Secret Network is an extension of Enigma. After the rebranding, Enigma’s ERC-20 token ENG was swapped 1:1 with SCRT.

These contracts are the most important element of the network. As self-executing pieces of code, these are an improved version of regular smart contracts. Along with the correctness, these also provide complete data privacy.

Just like Ethereum’s ERC-20 token standard, Secret Network has its own token standard called SNIP-20. These tokens have their privacy preserved by default. To comply with regulators, the holders are given access to Viewing Keys using which the holders can prove the ownership.

Currently, staking rewards for delegators and validators is well above 10%.

The network announced the Secret Ethereum bridge recently. This bridge promises to make privacy cheaper and more practical for Ethereum and Ethereum-based assets. That’s because it is a two-way asset wrapping protocol.

You can now lock your $ETH and ERC-20s on the Secret Ethereum Bridge and mine for your share of 500,000 $SCRT – part of 2M $SCRT allocated towards the launch of Secret DeFi!

Furthermore, it allows users to lock tokens on one blockchain and then mint an equivalent amount on the other blockchain.

What are Secret Apps?

Secret Apps are the decentralized apps that utilize the privacy-enabled secret contract to facilitate powerful use cases.

Moreover, the network allows the creation of private and powerful dApps for sectors like: 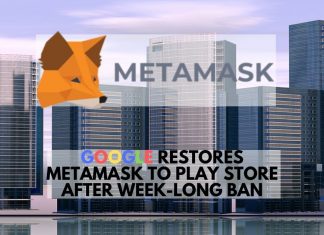 MetaMask is Back. Google Had a Change of Heart

Daniel Abel - January 3, 2020 0
The Ethereum dApps browser, MetaMask, has encouraging news. Google has reinstated it after a one-week ban. MetaMask via tweet stated that Google had reviewed its position...

Tron is Rocking the Week with Two New Partnerships