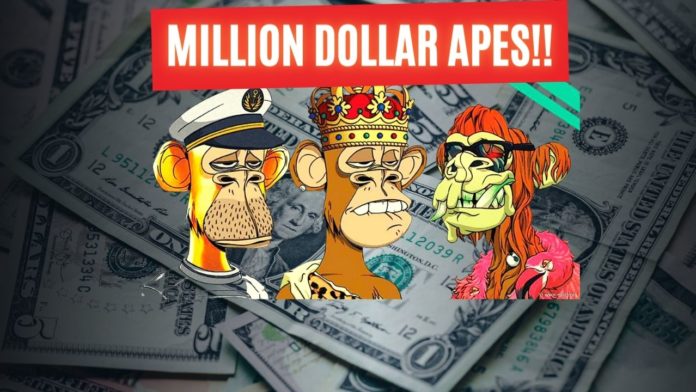 NFTs have been surging this last year. The most popular of these collections, Bored Ape Yacht Club is yet to even reach a year old. Nowadays, people like Justin Beiber, Jimmy Fallon, Paris Hilton, and Snoop Dog have them.

Interestingly, the collection is valued at a floor, or minimum, of 91 ETH or almost $300k.It seems almost impossible that real people are spending this kind of money on what looks like a JPEG on the internet. Why are these Apes so valuable? And why are people willing to spend unfathomable amounts of money? In this article, you will discover about this phenomenon.

What is the Bored Ape Yacht Club?

The Bored Ape Yacht Club is a collection of 10,000 randomly generated Non Fungible Tokens stored on the Ethereum Blockchain. That means that only 10,000 of these individually unique Ape Tokens exist, and only 10,000 will ever exist from this collection.

Had to get a proper frame for my MAYC x @RollingStone cover. Hand painted slime on mat and candy painted frame made this complete and ready for my wall. pic.twitter.com/u0F9PbUTdw

This creates a sort of bidding war among the rarest and most unique of the collection. Therefore, the rarest are typically the most expensive, with the most common being the cheapest. Well, what stops someone from just screenshotting that picture and claiming it for themself?  This is where we start looking at where the value comes from.

How a Bored Ape NFT Works?

The beauty of the blockchain is, it doesn’t matter if someone screenshots it. Each of these pictures was minted as part of a collection, remember the apes were back in April. Every single true transaction of these Apes since the day they were minted is tracked on the Ethereum Network. Purchases, sales, and transfers are all tracked. What that means, it is very easy to trace who owns which Ape.

Also, you can see who minted which Ape, or essentially first claimed it, and who they sold it to if they have at all. From there you can track how long that person held it for, who they sold it to, for how much, and so on. In short, you can essentially, and almost in an instant, figure out who is currently holding Bored Apes, and also who isn’t. While screenshots seem like they give you access to the NFT, it doesn’t.

Moreover, screenshots are only saving the state of the token that’s being used to differentiate each token from the other. You aren’t saving the token. The only way to get ownership of the token is to do a transaction on the Ethereum Network, and transfer this token to a wallet that you own. In other words, Screenshots don’t get you full possession of these assets. You have to put up the money for them.

Well, that still doesn’t fully explain why people are paying hundreds of thousands of dollars for these pictures.

Where Does The Value From an NFT Come From?

This is the most interesting part and I think there are a lot of aspects that bring these Apes, and other popular NFT collections, value. Let’s break it down here.

We understand what makes each NFT within a collection Valuable (a rarity). But, four things make an NFT collection in itself valuable:

Let’s look at these four things, and how they relate to the Apes.

The first and second on the list kind of cross over so let’s look at those two first. See, as we mentioned before since every transaction is tracked on the Blockchain, it is extremely easy to prove who owns an ape and who doesn’t. This means it’s very easy to make members-only events that require access with a specific NFT.

Therefore, this could range from parties, to access to clubs and restaurants, trading alpha groups, and more. Some even generate tokens upon staking for passive income generation. That could be a video on its own so we won’t go too far into it.

Additionally, some projects give their holders additional NFTs and rewards for just holding certain projects. Bored Apes have done a fantastic job of this. First, holders were airdropped, another word given for free, a mutant serum. This NFT could be combined with the holder’s Bored Ape NFT to create an additional Mutant Ape NFT for that holder.

What is the “Floor Price” Concept About?

If the price of one bored ape is 19 ETH, this was a 0.08 ETHER to mint it. Those that have held have been rewarded clearly. Not to mention, this past fall, holders were each airdropped an NFT from the BoredApeKennelClub, the BoredApes companion drop. That floor price is 8.25ETH right now.

So let’s do some math. 19+8.5=27.5ETH in benefits, at FLOOR. That means that if you even got a slightly rare dog or mutant, that number rises significantly. So that’s tangible returns, with the aforementioned $APE token dropping soon for the most diamond hand of holders. That number also doesn’t include the whitelists from other projects and free airdrops that BAYC holders have received throughout the project.

We still haven’t even mentioned exclusive holder events. Back at NFT NYC 2021, the most exclusive and best party was only accessible to holders of BAYC and MAYC. Expect plenty of these exclusive events in the future.

Moreover, holding an ape gives you access to the wealthiest, most connected, and most tenured members of the NFT and Crypto space. There is tons of value in sitting in members-only discord servers with these people and listening to what they’re buying and selling. You can’t put a true dollar value on this, but the access holding an Ape gives you is unmatched.

Not to mention the “clout” or esteem that comes with holding one of these instantly recognizable NFTs. And with Twitter profile picture verification already here, some of you may roll your eyes, but there is value in having recognizable and rare profile pictures or assets as well.

Also, keep in mind that you need to remember that since every transaction is tracked on a chain, it’s incredibly easy to find the firsts when it comes to certain concepts and ideas. You just trace them back and find the first.

How to Value an NFT?

For example, the mere ownership effect refers to an individual’s tendency to evaluate an object more favorably because they own something, according to the Encyclopedia of Social Psychology. So you could attribute some of the insane values we see on OpenSea to this psychological effect where people tend to put higher values on things they own. They own this NFT and value it higher than maybe they should. Fine.

But someone needs to buy it, and that’s where the interesting buyer psychology comes in. The biggest thing we need to remember here is that the supply of these collections is completely fixed. The Bored Aes devs cannot mint a new Bored Ape and put it in circulation like saying a government treasury could with their currency. Only 10,000 Apes from this collection exist and will ever exist. If the devs want to expand their ecosystem, as they have, they need to make an entirely new line or collection, separate from the Original bored apes collection.

As Gary Vee Puts it, it’s the same reason people buy Chanel Handbags and Nike shoes. People use items to identify themselves and display their wealth.

For someone with new money, say a crypto millionaire or billionaire, let’s ask one question. They could easily buy a Rolex worth 20k that 100 people on a given day may see and recognize. Or, you could put a similar amount of money into a popular NFT collection that you display on your profile that they spend 75% of their time on. Instead of maybe 100 people seeing it, in some cases, thousands if not millions are seeing that you own this asset daily. There are unfathomable amounts of value in that concept.

How Does Speculation affect the Price of an NFT?

What’s happening here is people are valuing these projects the same way that they value companies like Tesla.

The concept of Web3 and the Metaverse isn’t some hair-brained idea. It’s happening and being built in front of our eyes. Decentraland and The Sandbox are very very early versions of this concept. This only works when you can 100% own your digital assets and have your avatar essentially be an extension of yourself. Right now we rent our assets when we use them on the internet.

Therefore, to be able to walk around there and have this Ready Player One experience, we need to be able to own these assets. NFTs give users this ability. And when people are speculating on the long-term viability of this technology, and are bullish on it, prices are going to skyrocket. There doesn’t need to be immediate value when you’re speculating on the future. What there needs to be is a strong foundation and building blocks for the future.

Moreover, if you don’t think NFTs and the blockchain will be the future of the internet, and you’re bearish on this tech, I’ve got some bad news for you. It’s not going anywhere. There is unimaginable value in actually owning the digital assets we use, and funnel our money into.

So when we start combining the utility these NFTs provide, the esteem and clout they come with, historical value, speculation on the metaverse, and more, we can start to piece together why some of these collections are valued so highly. It’s not a simple answer. There are so many aspects that we need to consider but the most important thing to remember is:

Finally, these are just JPEGs, but they are unique and individual keys to a more powerful-user centric internet experience. This is where we are going as a digital economy. Jump on the bandwagon, or run the risk of getting left behind. 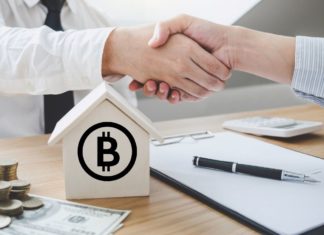 Camille Lemmens - April 28, 2022 0
Buying a house with a crypto-mortgage in the USA is a real option nowadays. Currently, there are just a few companies that offer crypto-mortgages...