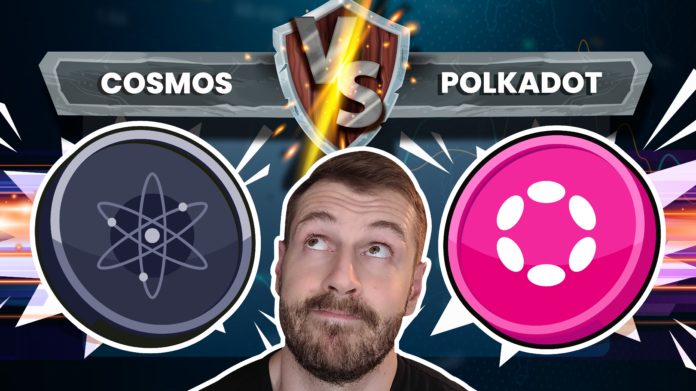 It is true that there is no project that is not bleeding at this moment because of the bear market, but like with everything in life, it will have its end. What will you do at that moment?

Short-term investors will tell you not to look at any random project and just pick the popular projects, while fundamentalists will tell you to invest in projects for their technology/potential. And that is why in this video I am making a comparison between two very popular yet technologically super-strong projects. I have my scoreboard ready, do you have yours? Let’s discover the latest Cosmos Vs Polkadot comparison.

Cosmos and Polkadot are projects focused on breaking the silos between blockchains and making them interoperable. While the end goal is the same, there is a stark difference between the approach and that is what will determine which one of these two will be the King of blockchain interoperability.

Cosmos is an exceptionally ambitious project. It’s taking gigantic steps to become the blockchain that pulls all the other blockchains together in its blockchain interoperability platform.  It calls itself the most customizable, scalable, powerful, and interoperable ecosystem of connected blockchains, and we cannot deny it because over 20 blockchains, including Cosmos Hub, Osmosis, Crypto.Org, and Terra, are now connected in the Cosmos ecosystem by the Inter-Blockchain Communication (IBC) protocol that allows independent blockchains to talk to each other and transfer data and assets.

At present, the ecosystem in Cosmos has more than 265 apps with more than $80 billion under management. Therefore, Cosmos has developed its “Cosmos Hub” which is an economic hub of Cosmos and provided services to the interchain, a project that wants to build a decentralized internet.

Polkadot is also a decentralized platform where anyone can connect public and private blockchains, and oracles, among other kinds of protocols. This is possible because Polkadot supports the creation of independent blockchains that can exchange data in a secure and easy way.   With the recent launch of Polkadot XMC, which enables direct messaging between parachains, Polkadot has really upped its game.

Cosmos has developed a next-gen decentralized exchange where anyone can swap digital assets across the interchain. One of the most important features of Cosmos is its low fees and instant transactions.

Also, it’s important to mention that Cosmos can be used to secure many chains in exchange for additional staking rewards.

Moreover, one of the most significant features of Cosmos is its interoperability capacity to let it work with chains like Ethereum and Bitcoin. Yes, any kind of blockchain can be connected to Cosmos.

On the other hand, Cosmos tries to fill the scalability gap, providing two kinds of scalability vertical and horizontal types. The first one helps PoW blockchains and the second one makes dApps can run in parallel PoS blockchains.

As we mentioned before, Polkadot is a sharded blockchain which means it is composed of multiple distinctive independent blockchains called shards that connect to a common relay chain. This means that polkadot- blockchains can:

It’s good to know that in the future, Polkadot will launch its latest feature called “nested relay chains”. It will increase

Comparing the features of both blockchains we have now, we consider that Cosmos has the lead here, as it allows any blockchain, including PoW blockchains such as bitcoin and Ethereum, to join. This gives Cosmos a huge potential to develop. Currently, this feature is not implemented, but we are sure it will be in the future.

Cosmos is considered one of the blockchain 3.0 which makes it easier for developers to build blockchains that can interact between them without sacrificing sovereignty, speed, and interoperability.

Also, devs need networking, consensus, and application to build a blockchain, and Tendermint (2) packs networking and consensus that allows devs to put more focus on developing use cases rather than struggling with tech. Devs can save a lot of time in developing unnecessary code.  While building a dApp with this consensus mechanism is very difficult, the Cosmos SDK solves this major issue.

We know that the “consensus” term comes from establishing an agreement or consensus between the nodes from the network, and Polkadot is not the exception.

Therefore, Polkadot has a NPoS (Nominated Proof-of-Stake) mechanism that created a parachain and relay chain. Parachain is primarily responsible for data calculation and transaction information processing which makes networks be together. On the other hand, relay chain is the feature that makes them secure in its intern network or by connecting them securely with bridges.

In short, this system tries to maximize the chain’s security by selecting who will be the validators with their DOT staking.

Moreover, in the consensus part, the majority of people inside the ecosystem are always looking for a secure blockchain as a priority, and Polkadot is designed to provide it better than Cosmos. The reason is that Polkadot work like a whole network where many independent compatible blockchains work. However, in Cosmos, every blockchain is fully independent of each other, where each of them has its own consensus and own validators.

We all know that more validators mean more decentralization levels. In other words, this means that when blockchains have a high level of these features, the odds of breaking them are fewer.

According to Polkastats, there are 297 accepted validators where there are more than 26,400 nominators that had staked more than 635,800 DOT tokens.

In addition,  In Polkadot, you need a minimum number of staked DOT. Also, you need certain software requirements for CPU, storage, and memory. Moreover, after analyzing the validator requirements in both blockchains, we think that Cosmos will be more decentralized than Polkadot because it promotes crypto adoption.

Only with these 4 news, we can see that both blockchains are having a great adoption with protocols and devs. Therefore is a tie in this factor.

In this factor, ATOM is a more dynamic token than DOT in terms of transactions. However, DOT is a much more recognized token that is in the 10th position of the entire industry. So DOT wins this factor

Cosmos has very well-known projects in its network:

Polkadot is one of the blockchain, projects with the highest potential. Here are the most important ones:

At this point, it is clear that Cosmos has blockchains that are much better known and consolidated in the sector than Polkadot. Projects like crypto.com, Secret Network, and Anchor are so big, that if you don’t do some research, you don’t realize that what they have in common is Cosmos.

As you can see in the countdown, Cosmos wins the comparison mainly because it can make any kind of project development with its own rules and consensus mechanism. And the reality of each of them is proving it, even when DOT has a bigger marketcap than ATOM. 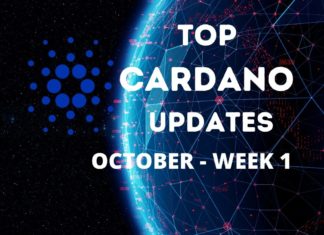 David Abel - October 5, 2021 0
There have been some remarkable developments in the Cardano (ADA) ecosystem. To keep followers informed, Altcoin Buzz takes a look at essential Cardano updates. Over...