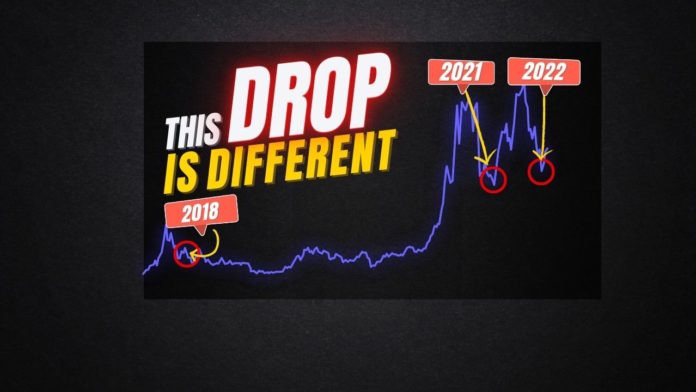 Bear Market it’s a scary phrase that doesn’t just mean downward prices. It means we don’t know how far down they will go and how much time we will need to make up those losses or turn losses into gains.

The last 2 big bear markets were in 2017-18 and 2020. But those markets had specific characteristics to them that this one does not have. Curious to find out more? We might not be in a Crypto Bear Market after all. Let’s find out.

The bear markets of 2018 and 2020 are different than today’s market. Big downward price action they have in common but not much else. First, let’s look at what happened back then. In 2018, the cause was the ICO craze and the following crash in that market that brought all crypto into a bear market.

Those of you around in crypto then remember what it was like. There were some high-flying ICOs like EOS, which was a top 20 project and now is #56.

The DAO hack of 2017 that caused the hard fork in Ethereum into Ethereum and Ethereum Classic is the largest single event of this market. It created doubts about Ethereum’s survival as a chain and whether they could recover from a centralized led hard fork. They have.

During ICO time, there were group chats and Telegram groups for insiders and front runners. They got into ICOs at private VC level pricing before releasing the coins to the public. Sound familiar? After all, that’s what’s going on with some NFTs and games right now with IDOs and launchpads and crazy whitelisting requirements.

Well eventually, after all the big insiders cashed out their bags for Bitcoin and Ethereum (mostly Bitcoin), there was nowhere left to go. Everyone sold their bags taking the entire market bearish. And what did Bitcoin do during this time?

One key on-chain metric, UTXO, which stands for Unspent Transaction Outputs plummeted from $6 million in late 2017 to under $600,000 in mid-2018. UTXOs are the part of your coin you don’t spend when you send a transaction. So that’s a huge bearish sign as UTXO should be rising regardless of price IF people are using the network.

Also, another key metric like MVRV or Market Value to Realized Value dropped too. MVRV measures the current price against the price that last time the coin moved. In 2018, it dropped from a high of almost 5, into negative numbers. When it goes negative, that means Bitcoin is extremely oversold and ready to bounce back, which it did. It also means short-term traders are trading it at a loss.

Now, 2020 had a different cause but it was also event-driven. In 2020, the cause was the pandemic. Fear about the virus, the effect it would have on people, and quarantining were a shock for nearly everyone. Markets around the world dried up.

Again, UTXOs dropped but not a lot. MVRV dropped again into the negative briefly in early 2021 signaling oversold conditions. Now it’s painful in this market too. But is it the same? We think it isn’t. Here’s why.

And they matter. A Lot. Especially with Bitcoin. And Bitcoin leads the market so we want it to be successful. So let’s see why what’s going on with Bitcoin on-chain is showing us better times are coming soon.

First, in the 2018 and 2020 bear markets, Bitcoin’s volatility increased as the price went down.

In our current market, it has been decreasing slightly and been flat for the last few weeks. So despite people’s fear in the market, it’s not translating into higher volatility compared to the most recent bear markets. Now let’s look at some other metrics.

Blockchain.com measures lots of on-chain metrics. On this chart of the last 6 months, it looks like MVRV, which declined heavily in both bear markets and eventually went negative, has bottomed out. That bottom, on January 24th, at 1.43 so still in the positive numbers. 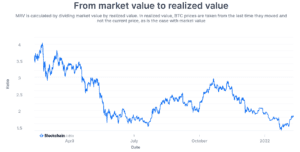 Seeking Alpha agrees to say that we are currently sitting between a neutral and accumulation phase. Not the same as in a full bear market.

Other than some very high spikes in September and November, Unspent Transaction Outputs have been slowly and steadily rising since late May. That doesn’t happen in bear markets. In bear markets they fall, sometimes as much as 90% like in 2018. Bullish.

Both on-chain analyst Willy Woo and Seeking Alpha see exchange reserves flat or declining meaning the amount on exchanges is the same or going down. There aren’t floods of people sending Bitcoin to exchanges to sell right now as you might think.

I guess BTC is in demand lately pic.twitter.com/5h1IeMT2lK

CryptoQuant, the quantitative research firm confirms this for us too. After huge increases of coins going to exchanges in the 2018 and 2020 bear markets, now it’s flat. There’s almost the same number that was there a year ago. So while people are fearful, they are holding on.

The Net HODLer position is growing meaning HODLers are HODLing for longer. They are not spending their coins. Again, that’s unlike the 2018 bear market and mid-late 2020 when more holders were spending their coins instead of HODLing. Holders are accumulating here. 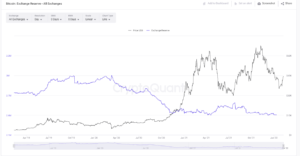 Our friends at Glass node have a detailed definition of what dormancy flow is. It gives us is an idea of whether Bitcoin is trading at a high price, fair price, or value price compared to the tendency to want to spend. Bitcoin is now in a deep accumulation phase like it was in early 2019 and mid-2020 before those 2 big runs in price.

This one is a sign that maybe the bears have had enough and bulls will take over soon. Bullish.

Only currencies usually talk about monetary velocity. In the US with the dollar, monetary velocity is part of the M1 and M2 money supplies. It’s a measure of how fast money is moving around in the economy.

And in healthy economies, that number is steady and increasing. Think about it. If you spend $5 for coffee, then the coffee shop spends $5 paying their wholesaler. It uses your $5 to pay an employee. Then your $5 is moving fast from person to entity to person.

When people and businesses hoard money, then velocity declines and so does economic output. Thanks to this CryptoQuant chart, we can see in the 2018 bear market velocity dropped like a rock. Again a drop, although less in 2020.

Again, this means coins are not moving through the Bitcoin ecosystem. People are selling or HODLing. But since January 2021, so for over a year, Bitcoin’s monetary velocity has been on a steady increase. People are using it more and it’s a sign that Bitcoin’s market is healthy.

Today, we compared the bear markets of 2018 and 2020 to our current market conditions. We decided to look at Bitcoin on-chain metrics and many important ones like:

Also, more shows us that today’s market is not like those markets were. What it means is that despite what you see in your portfolios that we are not in a bear market right now. Could we be eventually? Maybe. But we aren’t right now.

And many signs like Dormancy flow and Exchange flows lead us to think it’s very possible the worst could be over and the bull could make a return soon. 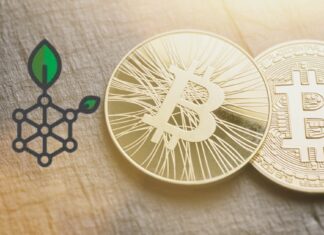 What is Rootstock and Why is it Important?

Lawrence Mike Woriji - December 20, 2022 0
Rootstock Platform (RSK) is a second-layer platform that aims to resolve some limitations of Bitcoin's blockchain. Some developers launched the platform in 2014 to...