Home Cryptocurrency News Everything About the XRP Lawsuit – Part 1 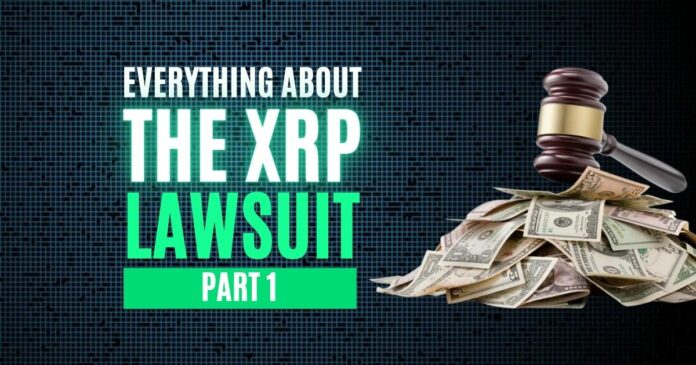 The Securities and Exchange Commisson’s (SEC) lawsuit against US blockchain company Ripple has dragged on for the longest time. Ripple leverages blockchain to process payments and is also the issuer of the XRP cryptocurrency.

Legal experts and observers have given their opinion about the xrp lawsuit with the SEC. The results from this case will be significant for the industry. The SEC has heavily pushed for the regulation of the crypto industry. While the US is yet to approve a nationwide policy on cryptocurrencies, the SEC has busied itself with keeping crypto service providers in check.

However, many critics believe the agency might have taken things too far in its case against the XRP. Now, let’s look at some key details of this lawsuit.

When Did the XRP Lawsuit Start?

The SEC filed a lawsuit against Ripple Labs, the firm behind the XRP cryptocurrency, in 2020. The agency accused Ripple’s founder and executive chairman, Chris Larsen, and CEO, Brad Garlinghouse, of raising $1.3 billion in unregistered securities offerings by selling XRP.

The SEC argued that XRP, which the founders created in 2012, is not a cryptocurrency but a security, bringing it within the SEC’s jurisdiction and subject to securities laws. The lawsuit was one historic moment in the crypto industry, sending the market into chaos. It was one of the first times the SEC clawed its fingers into a well-established platform like Ripple. The lawsuit did more than damage Ripple’s reputation. It also sent the XRP price crashing. Coinbase suspended XRP trading.

Stephanie Avakian, then director of the SEC’s enforcement division, declared in a statement that Ripple” failed to register their ongoing offer and sale of billions of XRP to retail investors, which deprived potential purchasers of adequate disclosures about XRP and Ripple’s business and other important long-standing protections that are fundamental to our robust public market system.”

So, Ripple has managed to put up a strong argument in its defense. The company argued that Ethereum is no different from XRP if classified as securities. Ripple also argued that the SEC has no jurisdiction over the XRP tokens since foreign exchanges have traded them.

How Long Will XRP Lawsuit Last?

Ripple’s CEO, Brad Garlinghouse, recently stated that the case could go on for another 3-4 months and might end in the first half of 2023. Brad also noted that Ripple would go for a settlement if the SEC agrees that XRP is not a security.

Several companies have submitted amicus curiae briefs to the court to support Ripple. The SEC, however, said it would demand more time if more amicus briefs were granted. In response to the SEC’s comments, Ripple’s representatives said, ” This is yet another transparent attempt to further delay the resolution of this case and the court should reject it.”

#XRPCommunity #SECGov v. #Ripple #XRP Ripple defendants object to SEC suggestion that the SEC will seek additional time or pages if other amici curiae submit briefs. “This is yet another transparent attempt to further delay resolution of this case and the Court should reject it.” pic.twitter.com/vTH9w2RV9t

XRP Lawsuit in a Nutshell

It’s been two years of slow progress and finger-pointing between the SEC and Ripple Labs. However, Ripple recently scored a huge win after the court ordered the SEC to hand over the “Hinman documents,” which the agency has fought hard to keep away from the spotlight. The document contained a speech made by former SEC Division Director William Hinman, who remarked that Bitcoin and Ether are not securities.

🚨JUST ADDED to our Document Library:
✅JUDGE TORRES OVERRULES ALL @SECGov OBJECTIONS, FINDS JUDGE NETBURN DID NOT ERR IN ANY OF HER DECISIONS, AND ORDERS @SECGov TO COMPLY & HAND OVER HINMAN EMAILS. 👇https://t.co/vSOAXXwcwr

Ripple considers the speech a piece of evidence against the SEC. However, it’s too soon to know if the language used in the speech will have the same impact as the firm claims.

The lawsuit’s outcome will significantly impact the whole cryptocurrency industry since it will set the tone for all upcoming regulations in the United States and the rest of the world. These rules will determine whether a cryptocurrency is a security and whether the SEC or another agency regulates it.

This is why the crypto market should be thankful @Ripple is fighting this case. If you add up the legal fees Ripple has paid to finally get a ruling from Judge Torres it is likely $2-3 million and they still don’t have the documents. Next step: SEC asks to certify or Mandamus. https://t.co/yXiUAoGNJA

Prominent members of the industry have also stood by Ripple. The founder of the Cardano blockchain and cryptocurrency, Charles Hoskinson, expressed his opinions about the Ripple situation on Twitter.

Charles claimed that XRP is not a security since it fails the Howey test, like most layer-1 protocols. According to the developer, imposing securities restrictions on assets with millions of independent global users and investors is illogical.

Charles, however, objected to Ripple’s strategy for handling the dispute. He criticized the company for its personal attacks on some SEC workers.

I've always taken a position that most layer 1 protocols aren't securities because it's bizarre and senseless to consider something that offers utility, is decentralized enough to have operators and builders throughout the world, and survives its founders passing Howie (2/16)

That’s it for now. We have an article with more details about the dispute. You can find the link here. What’s your take on the lawsuit? tell us in the comment section.