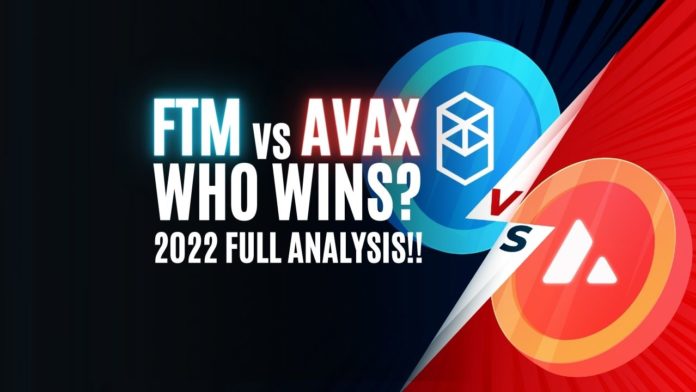 Both are anticipated to be potential Ethereum Killers with very high yields, fast and super cheap transactions. Many Ethereum dApps have moved to Fantom and Avalanche. Therefore, in this article, you will discover a complete analysis of 10 points which will make you have a better idea of their capacities.

Fantom is a compatible EVM-smart-contract blockchain that is high-performing, scalable, and secure. It was created to address the shortcomings of prior blockchain systems.

Also, Fantom is open-source, permissionless, and decentralized. FTM, the native token, at the time of writing this article, has a current marketcap of $5.4 billion with a 24-hour trading volume of $2.1 billion. Also, its circulating supply represents 80% of the total supply with 2.54 billion tokens in the ecosystem right now.

On the other hand, Avalanche is the quickest smart contract blockchain in terms of time-to-finality, and it has the most validators of any proof-of-stake protocol.

The native token of Avalanche is AVAX, at the time of writing the article, which has a current marketcap of $15.3 billion with a 24-hour trading volume of $1 billion. Also, its circulating supply represents 64% of the total supply with 244.3 million tokens.

As you can see, Fantom is having 5 times more transactions than Avalanche, which means its ecosystem is growing faster. Now, we will start analyzing 10 factors that are important to see:

For DeFi platforms, the market cap by Total Value Locked ratio (MC/TVL) is a key indicator to identify whether a coin is overvalued or undervalued.

Look at the chart Fantom has an MC/TVL ratio of less than 1 while Avalanche has a ratio of 1.92 which means FTM is still undervalued and will continue to soar and Avalanche is overvalued and with every market correction its price will go down.

Fantom is a winner here 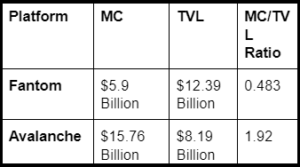 Apart from those, Fantom has an official wallet called fWallet, where you can send, receive. stake your FTMs and access to Fantom’s DeFi dApps.

Further, Avalanche has its official non-custodial wallet which you can access to it by private keys, Mnemonic key phrase, Keystore file, or even with your ledger.

Conclusion: We think that Fantom has better wallet compatibility because you won’t need to create a new wallet, having your Fantom’s tokens in the same wallet that you have other assets but in a different network inside it.

Fantom’s team has 22 members who are engineers, scientists, researchers, designers, and entrepreneurs.

AvaLabs is behind Avalanche, which has vast experience from leading companies who belong to the “Fortune 500” group and also blockchain companies.

AvaLabs’s team has more than 100 members. In this topic, we think that Avalanche is the winner because it has a stronger team than Fantom, having more experience in many topics.

We’ve already said that one of the most important advantages of Fantom is that it is EVM-compatible.

This means that developers will be able to build smart contracts with the most famous programming language in the entire ecosystem: Solidity. Also, devs can use Vyper.

In Avalanche, developers can also deploy their smart contracts in an improved version of Solidity, called Solidity++

In this topic, Avalanche has optimized features to make dApps can be much more scalable, secure, and fast to be executed by users. However, Fantom is compatible with Solidity and Vyber, which means that more developers can migrate their ethereum’s dApps to Avalanche and code new ones faster. Fantom is the winner.

With the first generation of blockchain platforms like Ethereum, smart contracts allowed the execution of decentralized applications. However, when more complicated dApps and/or users are added, the network as a whole slows down.

As a result, Fantom and Avalanche developed to close this gap. However, each one of them does it differently.

Fantom solved the scalability problem by providing each application its blockchain, similar to how different computers on the same network run different applications.

Each blockchain is self-contained, with its own set of tokens, tokenomics, and governance rules with more than 4,500 transactions per second and the time-finality in Fantom are 1 second.

In Avalanche, developers can launch ethereum dApps Avalanche instantly to make the protocol can have more than 4,500 transactions per second and the time finality is less than 2 seconds.

This means that developers can scale decentralized applications very easily because protocols can have the same dApp in more than one blockchain but with faster and cheaper transactions.

In conclusion, we give a slight edge to  Fantom because its scalable capacity is higher than Avalanche.

Fantom is one of the first completely decentralized blockchains that offer on-chain governance.1 FTM token means one vote

In Fantom, the governance mechanism is controlled by its native token, $FTM, where its holders can participate and propose improvements in on-chain decisions.

To do it, holders need to stake their FTM tokens. Also, it counts 100 FMT tokens to propose a submission and 1 FMT to vote.

Likewise, in Avalanche, users can hold AVAX to participate and propose governance decisions. For example, AVAX holders can vote to change the minting rate, staking amount, or staking time.

We couldn’t find official sources of how the governance voting works in Avalanche. Therefore, we think that this feature is still in development.

In conclusion, we think that Fantom wins because this blockchain already has a fully established voting structure. Meanwhile, Avalanche isn’t finished yet.

To be a node validator in Fantom, you need at least 500,000 FMTs ($1.4 million) and specialized hardware that can be costly with 13% APY in FTM rewards.

On the other hand, to be a node validator in Avalanche, you need a CPU equivalent of 8 AWS vCPU with 16GB of RAM and 512GB of storage with Ubuntu as OS.

In conclusion: Avalanche is the winner in this comparison because anyone would need less money to be a validator in comparison with Fantom. Therefore, in the future, it’s very probable that Avalanche will be more decentralized if these conditions continue.

The two biggest advantages of Lachesis are that it is Byzantine Fault-Tolerant. This means Fantom can operate with ⅔ of the nodes in comparison to any other blockchain. Secondly, the finality time is fast because transactions don’t need to wait for block confirmations and are confirmed in 1-2 seconds.

Moreover in Avalanche, acceptance, and rejection of a block is definitive, taking only a few seconds.

In conclusion, we consider that both blockchains have very efficient consensus mechanisms so it’s a tie.

According to CoinGecko, the FTM token has a max supply of 3.1 billion units where 80% of which are circulating in the ecosystem.

On the other hand, you can buy FTM tokens in many exchanges like Digifinex, Binance, HiBTC, Gate.io

According to its whitepaper and CoinGecko, the max supply is 720 million AVAX tokens, where 52% of them are already in circulation right now. Also, AVAX has the following use cases:

Moreover, you can buy AVAX in many prestigious exchanges like Binance, Bitfinex, Digifinex, Coinbase, among others.

We can conclude that Avalanche has a better future in distributing their tokens in protocols (TVL) or to their holders. Therefore, Avalanche wins.

On the other hand, Avalanche has a bigger and more diversified team behind it. Also, it’s more accessible to be a node validator and AVAX has a longer path to incentive protocols or users making the ecosystem bigger.

Fantom emerges as a clear winner out here. 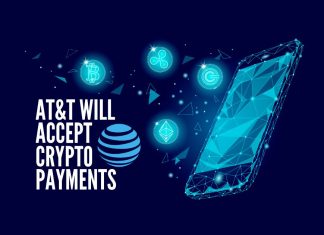 Robert Patrinjei - May 23, 2019 0
AT&T will be accepting Bitcoin through BitPay, which is an online payment solution for cryptocurrency companies. With BitPay, customers and businesses can accept crypto...