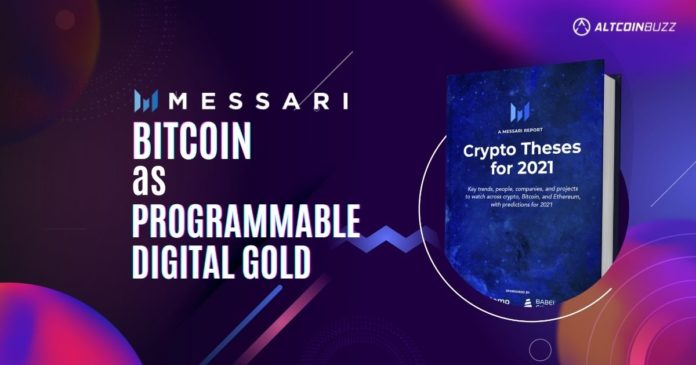 A decade ago, Bitcoin was still relatively unknown, and few platforms could accept virtual currency as a means of exchange. Today, it is the most sought-after digital currency, and some experts correctly refer to it as a “programmable digital gold.” Bitcoin is an irreversible type of private money that has shown to be extremely difficult to eradicate. It has beaten every major asset class throughout its history, and it has excellent momentum.

Messari released its “Crypto Theses for 2021” report, and it dived into several key aspects of the crypto market. It covered concepts like  NFTs, stablecoins, crypto exchanges, DeFi, CeFi, and Bitcoin. In addition, this article will look into the newly perceived notion of Bitcoin as a “programmable digital gold.”

The coronavirus pandemic blew open a lot of possibilities in the world. It was a time when nations of the world struggled to proffer economic answers to the devastation and meltdown the pandemic brought. However, it was at such a time that the cryptocurrency industry gained huge attention. Some financial giants, like JP Morgan and BlackRock, speculated that the token could replace the yellow metal in time to come.

According to Messari, most people see Bitcoin as an alternative to gold in today’s digital world. Several investors have thrown their weight around the most popular coin. Bill Miller “strongly recommended” investors to get exposure to Bitcoin if they didn’t yet own it already. Taking the claim stronger, JP Morgan said that family offices “may be looking at bitcoin as an alternative to gold.”

The world’s leading institutional money managers have finally come out to support BTC, making it socially acceptable for their colleagues to join in. As a result of this support, the crypto market would become more accessible to investors. Major financial institutions’ widespread acceptance of Bitcoin is a big factor in the crypto explosion in 2021. Messari said Bitcoin, from a professional point of view, has become safe to buy. To most asset managers, Bitcoin is an appealing investment to make.

Throughout history, gold has served as a medium of exchange and is arguably the most valuable asset on the planet. It serves a variety of purposes for both personal and commercial use. Also, the price of the yellow metal has been steadily increasing for decades. On the other hand, Bitcoin has soared to new heights, breaking records and setting new highs. As a result, more investors and crypto fans have spotted striking similarities between the two.

Most users consider gold a safe-haven asset. The colored metal has often served as a hedge against stock market volatility during a financial crisis or recession. Meanwhile, Bitcoin possesses similar abilities to gold. Bitcoin and gold both have considerable advantages over fiat currencies. Both assets are not debased or diluted. In addition, they are frequently used to diversify portfolios.

The scarcity of both gold and Bitcoin is one of their characteristics. These assets are scarce resources and are not printed like money. There will only be 21 million bitcoins in existence.

In addition, there is a commonality in transparency. For example, gold has a well-established, exact trading, weighing, and tracking system. As a result, it’s quite difficult to steal it, pass it off as counterfeit, or contaminate the metal. The coin is also impossible to tamper with. This is all thanks to its encrypted, decentralized architecture and sophisticated algorithms, making it one of the most secure systems.

Aside from its many features, Bitcoin is also  “programmable.” This means that Bitcoin custody can be incredibly flexible. It can be divided among a group of people (known as “key holders”), backed up and encrypted, or even frozen in place until a future date. This is all done without using a centralized authority to oversee the procedure. It’s also possible to memorize a key and walk through a nation’s borders owning millions of bitcoins but holding nothing in your hands.

Bitcoin’s native token is a “digital gold” because it resembles gold and the unique qualities it can offer due to its totally digital nature. It shares fundamental qualities with gold, which means it has similar use-cases. Bitcoin is more relatable in our present digital world. The world does, in fact, require a digital equivalent of gold.

Almost all transactions occur digitally in today’s world. Furthermore, it might not be feasible to carry gold or its equivalent, but Bitcoin can go several miles in seconds. With most platforms now accepting the digital currency as a means of payment, a revolution has begun. Bitcoin is the digital gold. It possesses the qualities of gold, and it has stood the test of time. 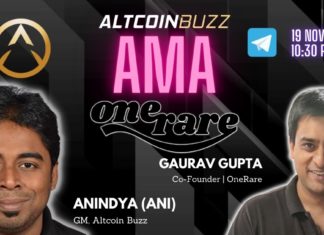 David Abel - November 23, 2021 0
OneRare is a food Metaverse game. They are creating a tokenization layer for Food on Web3, ensuring a rich and gamified experience for players. The...