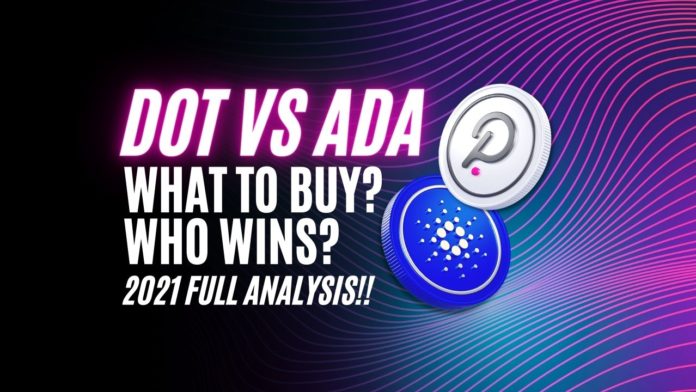 Ethereum is the leading smart contract platform in the crypto-economy today. However, its high gas fees are one of the issues why DeFi investors are looking for other blockchains. Therefore, in this article, we’ll tell you why Cardano or Polkadot might substitute Ethereum in the future.

Also, recent announcements, partnerships, programming languages, and tokens to determine which project has the best chance of overthrowing Ethereum. Let’s start with Cardano.

Firstly, Cardano blockchain is an open-source platform that will allow users to create decentralized smart contracts. Both enterprises and governments use this blockchain. The team aims to:

Secondly, the native token of Cardano is $ADA, in honor of 19th-century mathematician Ada Lovelace. Therefore, most developers consider her the first computer programmer.

Cardano has its official wallet called Daedalus. This secure wallet has many features, such as a full node running Cardano’s’ blockchain and delegated staking options. Then, Cardano is also compatible with other wallets such as Yoroi, Ledger, and Trezor.

In the early days, Cardano could handle only around 257 transactions per second (TPS). For instance, Cardano introduced new state channels known as Hydra heads which claim around 1,000 TPS.

The governance system used in Cardano is off-chain, which is like Ethereum. In the Cardano network, the Cardano Foundation and IOHK make the governing decisions. Consequently, when the Voltaire era begins, governance becomes public.

The founder of Cardano is Charles Hoskinson. He is a trained mathematician. Earlier, he was also associated with the early development of Bitcoin and co-founded Ethereum. Also, he was one of the founding chairmen of the Bitcoin Foundation’s education committee.

Cardano is a public distributed network that is ”the people’s network” with more PoS validators than every project except ETH 2.0. Cardano pays for any transaction or deployment of a smart contract in its ecosystem. $ADA coins go to stakers who keep the network operating and secure.

The Cardano team recently completed the Goguen upgrade. The following upgrades are:

In addition, once Voltaire is ready, users will build their on-chain tokens for transactions on Cardano. Like Ethereum, Binance, or other token protocols, users can buy and sell these custom tokens like $ADA on Cardano.

This blockchain had four meaningful partnerships in recent months.

Cardano uses a new domain-specific language (DSL) for developing decentralized applications (dApps) on the blockchain named Glow. Developers use Glow to secure dApps and smart contracts, which lets them run dApps safely in an adversarial environment. Glow is used for smart contracts, but anyone can develop an entire dApp, including client code and formal proofs.

At the time of writing the article, $ADA was trading close to USD 2.00. The circulating supply of ADA was 32 billion ADA coins with a maximum supply of 45 Billion. Currently, it holds the 5th highest market cap, according to CoinMarketCap.

What is Polkadot ($DOT)?

On the other hand, in the Cardano or Polkadot comparison, We’ll continue with Polkadot. This is an open-source multi-chain platform that allows:

The Polka wallet app is one of the most popular options to save $DOT coins. Users can use this wallet for the transfer of assets to any account on the network. It also supports the scanning of Q.R. codes for quick transactions. This wallet has features like:

Therefore, many wallets support $DOT, including the Ledger hardware wallet and the popular Metamask browser wallet.

Parachains in Polkadot solve scalability issues through a divide-and-conquer approach. With $DOT, users can create new parallel blockchains (a parachain). Also, $DOT can process up to 1500 transactions per second (TPS)

The governance system used in Polkadot is On-chain. It relies on two specific collectives: The Council and the Technical Committee. Also, they manage exceptional events such as protocol upgrades and fixes. All stakers vote on proposals and participate in governance.

The founders of Polkadot are Dr. Gavin Wood, Peter Czaban, and Robert Habermeier. Dr. Wood is Ph.D. in Software Engineering and has over 20 years of experience in software development.

On the other hand, Wood coded the primary functional version of Ethereum and even authored Ethereum’s’ Yellow Paper. Parity Technologies is a prominent contributor too.

Polkadot has 912 validators in the relay chain. These are split into smaller numbers to validate each parachain. Moreover, these validators have options to allow other bonded parties to nominate one or more validators to act for them.

The team uses the GRANDPA (GHOST-based Recursive Ancestor Deriving Prefix Agreement) consensus to make the Polkadot network more secure and resilient. In good network conditions, it can confirm blocks instantly. Under more challenging network conditions, such as network partition, GRANDPA can finalize large blocks at once.

Due to the parachains flexible ecosystem, many new projects were already launched on Polkadot, such as REEF, PHA, XFT, CRU, REN, O.M., AKRO, XOR, and others. Additionally, every platform has different APYs for staking DOT, which can go up to 20.27%. Currently, over $21 billion worth of DOT has been staked.

Also, to enhance parachains and their related technologies, Polkadot recently launched a new testnet called Rococo. The primary function of Rococo is to test parachain functionality. The team will integrate a lot of other tasks in Rococo like:

Polkadot also has had four impressive partnerships in recent months.

Polkadot works in many programming languages, which range from Rust to JavaScript. Currently, the leading implementation uses Rust on the Substrate framework. The Substrate is a framework that allows developers to develop entire blockchain applications with ease.

Moreover, at the time of writing this article, $DOT was trading close to USD 42.38. The circulating supply of $DOT was 1 billion coins with a total supply of 1.1 billion. Currently, it holds the 8th highest market cap, according to CoinMarketCap, with USD 44 billion.

Finally, in this last section of  the Cardano or Polkadot analysis, we’ll say which blockchain is better in every single factor that we’ve analyzed previously:

After analyzing each of the nine key factors of the Cardano or Polkadot comparison, we conclude that Polkadot is the strongest competitor of Ethereum’s blockchain.

Luc Lammers - September 6, 2018 0
Today, Business Insider reported in an article that Coinbase is exploring the options for a crypto ETF using the help from $6 trillion Wall...

The 5 Fastest Growing Blockchains for Developers