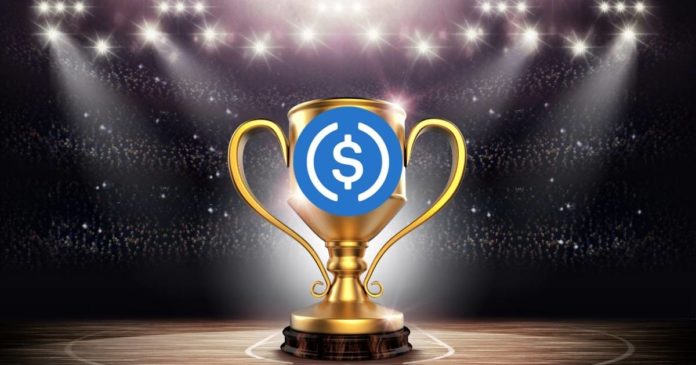 Cryptocurrencies pegged to the U.S. Dollar or Euro are stablecoins. They serve as a great payment mechanism via the blockchain. For the first time on Ethereum’s network, the leading stablecoin developed by Tether (USDT) falls to second place. As a result, Circle’s stablecoin (USDC) surpasses it in total circulation on the second biggest blockchain.

As of this writing, USDC has a supply of 40.06 billion tokens on Ethereum, slightly ahead of USDT’s supply of 39.82 billion. For more than five years, Tether has consistently remained a leading stablecoin. However, since  USDC emerged in 2018, it became an immediate threat to Tether. Most users see it as more transparent and regulated, while Tether has faced questions about its support system for years.

USDT still ranks ahead of USDC in terms of the total supply. It has about  78.5 billion tokens, half of which sit on Tron. Furthermore, USDT is on 13 other chains or Layer-2 solutions, including BSC, Solana, Huobi ECO Chain, Avalanche, Polygon, and 13 others.

ETH and Tron together are 95% of the total market for USDT, and there’s almost as much on Tron as on Ethereum. So, if ETH’s fees were lower, USDT wouldn’t be using Tron. Also, if USDT were not using Tron, USDC would not be flipping USDT on ETH. This is one possible reason.

Also, Tether’s public image has deteriorated over time due to doubts about its backing. Tether has faced criticism concerning the collateralization of the stablecoin and the management of its reserve money. There have been several attempts to rectify this decline but have been unsuccessful. One of such attempts was the publication of two Consolidated Reserves Reports by accounting firm Moore Cayman. The firm assessed Tether’s financial reserves in 2021, but it did little to assuage the doubters.

On the other hand, Circle has been more open about its reserves. However, some believe it should do more. Coinbase collaborates closely with Circle, a digital payment firm that assisted in the introduction of USDC in October 2018. Although critics demand more transparency from Circle, it has been open about its reserves. Last year, Emilie Choi, Coinbase president, stated that the USDC reserves would be fully made up of cash and U.S. Treasury bonds. This was later achieved in Q4 of 2021.

Circle has backed efforts to create a unified regulatory framework for all stablecoins. Its CEO, Jeremy Allaire, backed a move by the Biden presidency late last year to treat stablecoin issuers like banks. Allaire later met with other key crypto sector experts at a hearing to debate the legislative agenda with the Financial Services Committee.

Luc Lammers - October 20, 2018 0
With the market being still bearish, most retail investors are always wondering which cryptocurrency is currently best to buy. Luckily, Weiss ratings might push...