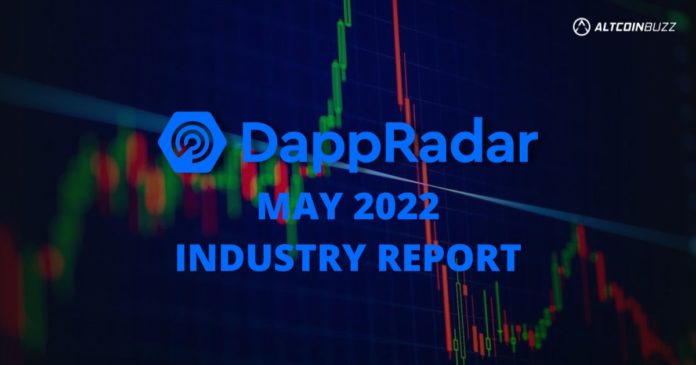 DappRadar is a leading data acquisition and analysis firm. It tracks over three thousand decentralized applications (dApps) on several blockchain platforms, such as Ethereum and TRON.

In a nutshell, DappRadar is a distribution pipeline. It serves as a gateway for analysts, researchers, dApp users, journalists, and investors to have access to relevant market data in order to make well-informed decisions. DappRadar gives users the ability to rate dApps based on their popularity and volume. This allows for quick discovery and analysis of the most popular apps.

DappRadar recently released its report for the month of May. The report evaluated key aspects of the blockchain space, including NFTs and DeFi. There was no doubt May would go down as a historic month in the minds of crypto traders following the collapse of the Terra ecosystem and its stablecoins. But that was not all that happened.

For the first time since December 2020, Bitcoin pulled the whole crypto market down, dropping below $30,000. In addition, many altcoins witnessed a huge slash from their previous peak in 2021.

May was not a pleasant month in terms of dApp activity. It was the lowest level of activity this year. DappRadar noted that there were about 2.22 million daily Unique Active Wallets (UAW) connected to blockchain dApps in May. This figure reflects a 5% month-over-month reduction, yet it is still 32% greater than in May 2021. Let’s look into the report.

Terra’s Downfall Was the Talking Point of May

May 9 remains a dark day in crypto history. It was the day the value of UST, the third-largest stablecoin at the time, plummeted to 35 cents. This collapse sent shock waves through the whole sector, with most stablecoins briefly losing their peg. To keep the UST value afloat, the Luna Foundation Guard (LFG) spent 79,687 BTC, valued at roughly $3.5 billion.

Terra’s co-founder, Do Kwon, proposed a rebirth plan that includes a Terra hard fork called Terra 2.0, which was released on May 28. As a result, holders of LUNA Classic tokens received an airdrop of the new version of LUNA, but at a 99 percent discount.

The whole instability with Terra affected the DeFi market the most. Terra, alongside Avalanche, Near, and a bunch of others, managed to keep things in order during the first four months of the year. Things fell apart in May.

According to DappRadar, BTC and ETH have lost 25% and 40% of their value since the Terra incident, respectively. Similarly, the industry’s TVL has dropped 45 percent since the end of April and had a value of around $117 billion at the time of the report.

DeFi Protocols Declined in May

Tron became the only blockchain to generate positive figures in terms of TVL. DappRadar reports that Tron grew 47% MoM. Other platforms, including BNB, Solana, Ethereum, and Polygon, all lost between 27 and 38 percent on a MoM. This reduction occurred as the price of their native currencies slipped. Other protocols, such as Fantom, Cronos, Avalanche, and Near, lost about 60% of this metric.

Other DeFi protocols, however, had better memories of May. For example, Uniswap hit a significant milestone. The renowned DeFi DEX surpassed $1 trillion in total transactions. Furthermore, some Solana-based applications witnessed a surge in May. This was regardless of Solana’s technical problems. These DeFi apps include Saber, Solend, and Orca.

The NFT Space Continues to Play a Vital Role

The NFT sector continues to be a vital contributor to the dApp space in these trying times. NFTs have managed to attract attention. The emergence of NFTs has changed the landscape of the crypto world. Although the mainstream media continues to predict that the NFT bubble will collapse, the market facts in the NFT arena are quite different.

According to DappRadar, the NFT market generated $3.7 billion in May. This was down 20% from April’s figures. Although trading volumes recorded in USD appear to indicate that the market is declining, that might not be completely true.

Regardless of the bad perception of the sector and the seeming decline of the NFT market, the space keeps evolving and generating billions of dollars in volume. The NFT space sees how new collections may change the story of the entire area almost every month.

How Did Opensea Fare in the Face of Competition?

Another fascinating trend arising in the NFT sector is the growing rivalry among marketplaces. Although OpenSea remains the most popular marketplace, rising organic activity in other competitors indicates that the NFT business has matured and changed.

The overall dominance of OpenSea decreased from 90 percent in the first four months of the year to 84 percent in May. The competition is getting more intense by the day. Marketplace aggregators like Gem and Genie have helped LooksRare and X2Y2 get more attention by giving a comprehensive view of the NFT market.

Similarly, X2Y2, an Ethereum-based exchange, grew its user base by 93% month-over-month in May, adding 11,500 UAW. The marketplace saw a 286% increase in trading volume from the previous month, bringing the total to $22 million.

As the NFT sector expands and becomes more competitive, OpenSea’s supremacy has clearly waned. Even still, it’s reasonable to conclude that OpenSea’s dominance will continue for months to come.

How Did Blockchain Games Perform?

The blockchain gaming industry has had a standout year. DappRadar reports that blockchain games suffered the least when compared to NTs or DeFi. The most popular blockchain games continue to attract new players. These platforms continued to soar in terms of engagement.

In particular, metaverse and blockchain game-based initiatives continue to garner increasing amounts of funding. Dapper Labs reportedly made a series of investments geared towards blockchain initiatives in May. This includes a $725 million fund targeted to help the Flow ecosystem grow. It also made a huge $4.5 billion commitment to its Crypto Fund 4.

Finally, the reports showed that the DeFi space was most hit by the Terra saga of May. Regardless, NFTs put up a strong performance despite many setbacks. The gaming industry appeared to have had the best of experiences when compared to other sectors. However, the coming months promise to be more competitive. 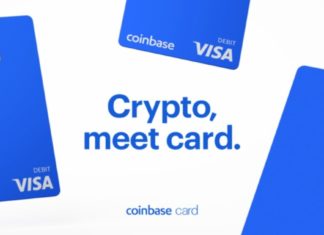 David Abel - November 3, 2020 0
Popular cryptocurrency exchange Coinbase announced that the Coinbase debit card will be launched in the U.S. this winter. From the time of the announcement, U.S....