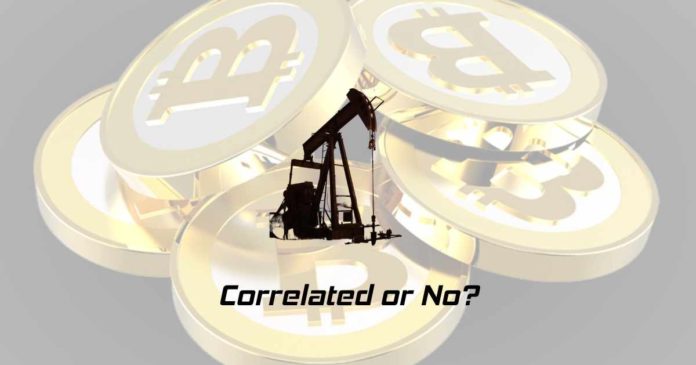 Bitcoin and oil aren’t exactly like peas in a pod. The first one is a digital-ledger entry, while the second is commodity. In this article you will find out is there a correlation between Bitcoin and crypto with oil.

Bitcoin and Ether, the largest and second-largest cryptos, have token supplies that do not respond to price or demand changes. Bitcoin’s supply is limited to 21 million tokens by its software code. The supply of Ether is not limited, but more tokens are being destroyed than generated. This trend is likely to continue with an Ethereum software network upgrade later this year.

Oil supplies, on the other hand, respond to price and demand. Rising prices, for example, drive higher output since it is more profitable to pump. However, at some point, prices might get so high that demand falls, causing prices to fall again. It is the commodity’s periodic boom-bust cycles.

As the war in Ukraine rages on, oil prices flying above $115 for WTI, rising almost 7% in a single day. These prices have not been seen since 2008, 14 years ago. Oil records its largest one-week increase since data began.

During last week, stocks fell, and bitcoin fell down to $39,000 after almost hitting $45,000.
Because many factors influence the price of the cryptocurrency, that rise suggests there is no direct correlation between bitcoin and oil. However, some sort of macro correlation is likely in that Europeans and Americans will spend more on necessities and thus have less in savings to invest in Bitcoin.

Because Bitcoin is unique in having some gold attributes, any isolated analysis is complex. But it is probably safe to say that if individuals have more money, they will invest more of them in Bitcoin. As a result, while oil and gas costs may not directly affect Bitcoin prices, the cryptocurrency would likely increase or fall less if customers did not have to spend more on necessities.

What to expect in near future?

Commodities are having a good year this year, but cryptocurrency prices have fallen. The Bloomberg Galaxy Crypto Index is down nearly 20%, while the Bloomberg Commodity Index Total Return is up 10%. We can say that oil is rising in a bear market, while Bitcoin is falling in a bull market.

However, supply and demand dynamics aren’t the only things in play. The connection of cryptocurrency to stocks is on the rise. Particularly with the tech-heavy Nasdaq Composite index. The Federal Reserve’s stricter monetary policies are putting pressure on both cryptos and technology.

Another uncertainty is the regulatory environment. Russia, India, and China will more strictly regulate crypto trading and transactions. China has banned Bitcoin mining and trading as it plans to introduce a digital version of its sovereign currency. The Biden Administration is also working on crypto regulations. Such as new taxes and trading regulations, as well as action to prevent illegal usage of cryptocurrency.

Bitcoin’s technical indicators aren’t indicating a lot of strength. The cryptocurrency has fallen far below support levels at $40,000 and appears to be trapped in the $30,000-to-$40,000 area. Negative sentiment in crypto is here to stay for a while, and a sustained move upward would need a reversal. Oil, on the other hand, might rise in response to geopolitical influences.

Analysts are warning that a ban on Russian oil could push prices to $150 per barrel.https://t.co/4n62QEvKtZ

Ukraine’s war is fundamentally about its oil and gas reserves. It is also about a number of other issues, but oil and gas are the prizes Russia wants from Ukrainians and send it straight to Moscow. It will disadvantage the Ukrainian people while giving Moscow more control over energy supplies to Europe.

Project Review Team - July 27, 2018 0
Overview: AERGO is an enterprise ready blockchain protocol, combined with a development platform and marketplace. They are aiming to build a distributed cloud ecosystem for...

How To Stake STX To Earn Bitcoin