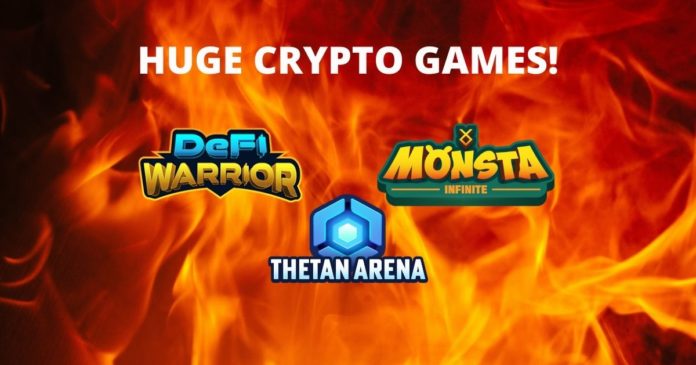 For instance, there are around 82 P2E games available, with many more on the way.
However, discovering the next hit early, if not very early, is critical to achieving such huge advantages.

Monsta Infinite promises that it is a better version of Axie Infinity. It is based on the Binance smart chain, which allows for considerably cheaper character and item costs.

This implies that transactions and character costs are significantly lower than Anxie Infinity as they are paid for in the $MONI token which is a BEP-20 token. For example, nowadays an average Axie costs around 0.1 ETH with the equivalence of USD 300-400 depending on the ETH’s price.

On the other hand, the gameplay is exactly the same as Axie Infinity, where it also has an in-game token called Stamen Tellus token (SST) that will allow it to be exchanged on a compatible exchange.

Also, this P2E videogame has already reached an initial USD1 Million marketcap in its pre-sale stage and is projected to break all the records. If you compare that with Axie Infinity’s $4.7B market cap, just imagine that Monsta Infinite may have a lot of potential in the near future.

The enormous capacity of the players to engage with each other is what makes this game stand out, as players may connect to their audience through live streaming platforms and expand their network by hosting or participating in mini-games and live events.

Therefore, this game has also created technology that will allow players to preserve and update their in-game assets, including their Monsta, without having to pay a charge at each stage.

How to participate in Monsta Infinite

Remember, during the KYC process, you will need to provide your BEP-20 address in your Metamask/Trustwallet wallet.

According to the roadmap, the public game launch will start in the first quarter of 2022.

Thetan Arena is based on WolfFun Games’ Heroes Strike, which has over 10 million downloads to date. All Massive Online Battle Arena (MOBA) fans are in for a treat with this game’s player-driven economic system.

In other words, Thetan Arena is a blockchain-based multiplayer online battle arena and battle royale game. Users may collect their friends and establish a team to play battles between them.

This game is different because it will be available for PC, iOS, and Android. Also, the level of character design is superior to many other games. It’s like playing Dota or League of legends.

Therefore, another thing about this game is that the revenue is shared through staking “Thetan Heroes.” NFTs. To do that, you will need $THG (native in-game token) and Thetan Heroes (NFTs) to receive it.

Certainly, you can start playing 100% free when the game launches at the end of the year. As you progress through the game, you will be able to earn different NFTs. Also, You can earn the in-game token called “Thetan Coin”.

According to the roadmap, the beta version on Android and PC will be active from September 2021. And by the end of this year, it will be possible to obtain the “theta coin.”

How to participate in Theta Arena

Thetan Arena is launching its own IDO (Initial Decentralized Offering) and will be hosted on Polkastarter on September 16th of 2021. The whitelisting will open soon.

To be eligible, you must either own $POLS, the Polkastarter token, in your Ethereum or BSC wallet, or provide liquidity to an ETH-POLS pool on Uniswap or PancakeSwap. When you hold POLS in an Ethereum or BSC wallet, for every 250 $POLS you have in your wallet, you will receive a “ticket”, which equals one entry into the whitelist process.

Once you’ve submitted your whitelist application, just wait for the team to announce the whitelist winners on their channels like Twitter handle or medium page.

DeFi Warrior is a DeFi x NFT Play2earn game with an intriguing crypto galactic storyline. It is built on top of the Binance Smart Chain, allowing users to play games on blockchain for a minimal price.

While NFT games are becoming increasingly popular, DeFi Warrior stands out due to its unique blend of DeFi and NFT, being one of the first games to have an Initial Game Offering (IGO)

Therefore, DeFi Warrior has one of the most diversified features in the ecosystem, which allows the user to have an NFT Marketplace, reward pools, and liquidity pools to monetize its game experience.

Another exciting feature about the game is that the warriors’ strengths are also determined by the movement of cryptocurrency prices. This makes the gameplay even more dramatic.

How to participate in DeFi Warrior

DeFi Warrior native token, $FIWA, is listed on Gate.io and its IEO/IDO has also happened on Poolz & Redkite. The public sale price is $0.0025/FIWA and the max supply of $FIWA is 10 billion which makes it a large-cap project.

Therefore, even before the $FIWA token trading started on Gate.io, the total value of orders placed has crossed $30 million. 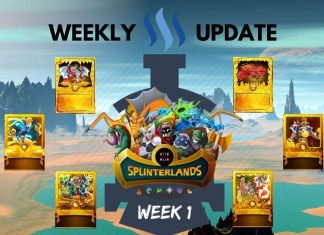 Ezekiel Ng - January 10, 2020 0
All aboard the Steem train as we bring in updates from Splinterlands. Splinterlands is on fire. More than 11 million games were played with cards...