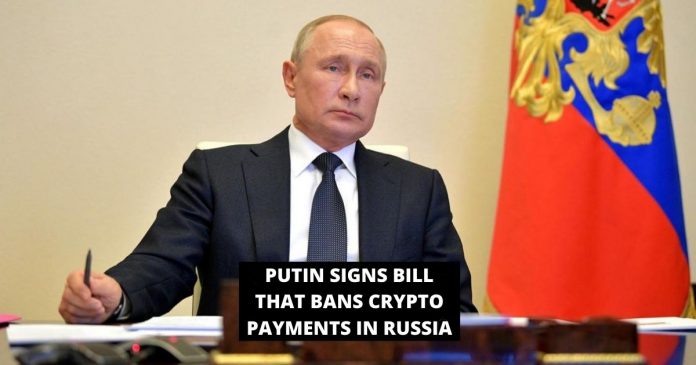 Russian President, Vladimir Putin penned a new law that bans the use of cryptocurrencies as a means of payment for goods and services in Russia. The new law gives legal status to cryptocurrencies but restrains its use for payment in Russia.

According to reports, Putin signed a bill that regulates digital financial asset (DFA) transactions. The bill got approved by the State Duma, the lower house of the Russian parliament, on July 22 and by the Federation Council on July 24. Accordingly, the law becomes active next year on January 1, 2021.

What does the law state?

According to the bill, digital currency is recognized as a collective electronic data capable of being accepted as a means of payment. It’s not the monetary unit of the Russian Federation. The bill explains that digital currency can’t be used to pay for goods and services.

The bill further explains that digital financial assets are digital rights comprising of the following:

It’s possible to sell, buy, exchange, and pledge these assets. But, they can’t be used as a means of payment.

Notably, Russian banks and exchanges get the opportunity to become operators of digital financial assets, given they registered with the Bank of Russia, Russia’s apex bank.

In addition, a part of the bill states that individuals and legal entities in Russia will be able to challenge crypto transactions in court if they have declared these transactions and their possession of cryptocurrency.

The bill also states that Decentralized cryptocurrencies will be considered as a type of property, which should be reported for tax purposes.

Notable cryptocurrency-related terms like “token” and “mining” were missing in the bill. But, a more detailed cryptocurrency regulation will be expected later this year.

Anatoly Aksakov, the Head of the State Duma Committee on the Financial Market, gave his view on the bill. He claims the Russian government-defined crypto as means of savings, payments, and investment. Ultimately, they’re safeguarding the Rubble as the only legal tender in Russia.

Once described by Changpeng Zhao (CEO of Binance) as the most influential person in the blockchain industry, Vladimir Putin has consistently shown interest in blockchain and cryptocurrency.

In 2018, when asked about crypto in his annual Q&A session with Russian citizens, the Russian President sounded supportive. Putin explained that crypto has its place in the world and Russia should carefully consider when and how to take part in the process of its development. He added that by definition neither Russia nor any other country could have a national cryptocurrency.

In 2019, Putin asked the government to adopt regulations for the digital assets industry during the Spring session for the year.

How will the decision impact adoption?

The decision in Russia attracted different reactions from crypto followers on social media.

User @BannerView said: “cannot be used to pay for good and services” Joke’s on Putin because no one uses crypto for actual payments.”

Other members from the crypto community chipped in their dismay as well.

I don’t see how this is bullish. Holding crypto as property is ok and will be taxed but it cannot be used as money??! This is crappy regulation. It’s denying the first thing crypto is designed to do. Be used as cash. This regulation won’t work.

The Russian Ministry of Justice and the Ministry of Economic Development already criticized the earlier draft from the lawmakers. It remains to be seen as the effect of this decision.

Previously, the Bank of Russia disclosed they carried out controlled testing of stablecoins. The testing took place within the confines of its regulatory sandbox program. Also, Binance exchange added support for the Russian Ruble (RUB) on its P2P platform.