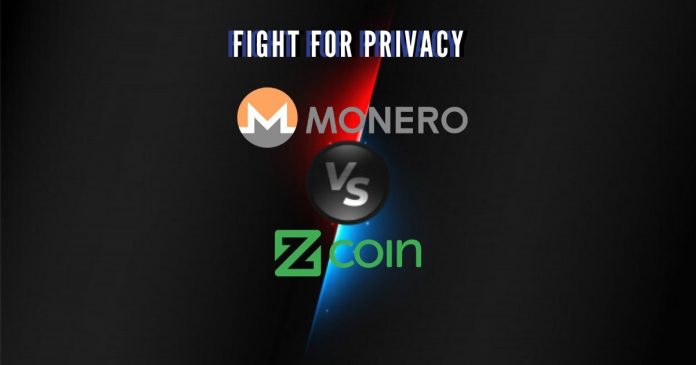 The scale of anonymity and privacy offered by public blockchains like Bitcoin (BTC) and Ethereum (ETH) has come under question time and again. From a technical perspective, public blockchains are pseudonymous and threaten the fungibility of cryptocurrencies. What it means is that at any given point in time, every BTC can be linked to its participants. Effectively, this makes BTC and so many other public cryptocurrencies less fungible.

Earlier, there had been numerous cases when users and exchanges rejected the public cryptocurrencies as “dirty” coins. That’s because they were either stolen or were part of some illicit transactions. Therefore, there is always a probability that a BTC or ETH you receive from someone is a dirty coin and you get stranded with a coin that nobody wants. That is where privacy coins like Monero and Zcoin play their part.

While Monero and Zcoin are allied against pseudonymity, they are also cut-throat rivals in the privacy space. At the time of the press, Monero (XMR) is trading at $63.80 while Zcoin (XZC) is trading at $4.56. It might seem like we are comparing apples and oranges. However, in crypto-verse, a coin’s price is far beyond just this metric.

This article will compare Monero and Zcoin in 2020 on the basis of:

Monero Coin originated on April 18, 2014, as a Bytecoin fork. And since then it has been ruling the playground of privacy coins as a secure, private, and untraceable coin. With the Proof-of-Work (PoW) consensus, it now uses the RandomX mining algorithm. Prior to Dec 2019, it used CryptoNote and CryptoNight V8 algorithms to create purely anonymous XMR tokens. Importantly, Monero Coin was the first cryptocurrency to use the CryptoNote algorithm.

For a ring signature to work, it involves an actual signer and decoy signers. In this ring, no one is aware of who signed the transaction, who is the actual or decoy signer. 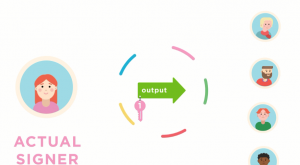 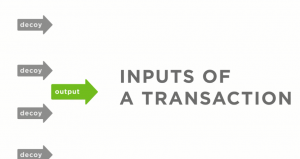 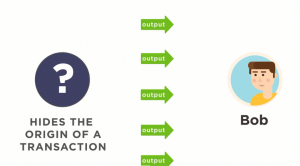 A transaction is crafted and outputs of other similar transactions on the blockchain are used to create a ring signature. Effectively, at the output, it is unclear to whom the transaction actually belongs. The CryptoNote algorithm is automatically capable of doing this. Thus there is no need to trust the coins with a third party mixer to ensure anonymity. Recently, Monero implemented RingCT (Ring Confidential Transactions) that hides the transaction amounts also.

Using ring signatures ensures there is no tracing possible for the transactions. However, to protect the privacy of receivers, stealth addresses come into use ensuring that the transactions are unlinkable. Basically, the sender creates a random one-time address. This ensures that there is no link to different payments made to a particular payee as every time it generates a new one-time random sender address. 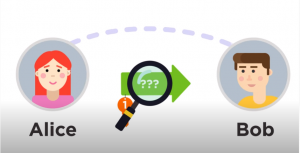 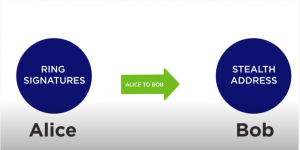 Monero finds a wonderful use case in trade finance. On the same lines, businesses can use Monero to make purchases from suppliers. However, there will be no threat of exposing any kind of commercially sensitive information. Moreover, even consumers can use Monero to circumvent price discrimination by merchants as they can hide their financial information.

Being a fungible currency, it is more appealing for businesses to accept Monero.

Unfortunately, Monero’s potential for anonymity and privacy is being excessively exploited in the dark web. Effectively, Monero earned itself a bad name and was unfortunately christened as the ‘currency of criminals’.

ZCoin originated on October 6, 2016. As compared to Monero, Zcoin is a new baby in the town yet has achieved significant growth from multiple technical aspects. Being a PoW coin, it is mineable just like Monero. Moreover, it used Lyra 2 and Lyra2z prior to December 2018 but then transitioned to Merkle Proof Tree (MTP).

Undoubtedly, the idea behind this transition was to level the playground for miners with a lot of computational power (mining farms) and those with little power (home miners). MTP is designed to use memory intensively. Moreover, this makes it ASIC resistant.

The technology evolution at Zcoin is pretty rapid. Like its algorithmic evolution, Zcoin’s privacy protocol has also evolved in the last 2 years.

Zerocoin protocol breaks the links between the coins. It achieves so by using zero-knowledge proofs (ZPK). Moreover, it does not obscure the transactions like by using ring signatures in Monero but it actually destroys the history of each coin.

With Zerocoin, one gets to burn or mint the coins and can then redeem an equivalent number of coins by spend. However, these freshly minted coins have no prior transaction history that is clean always. 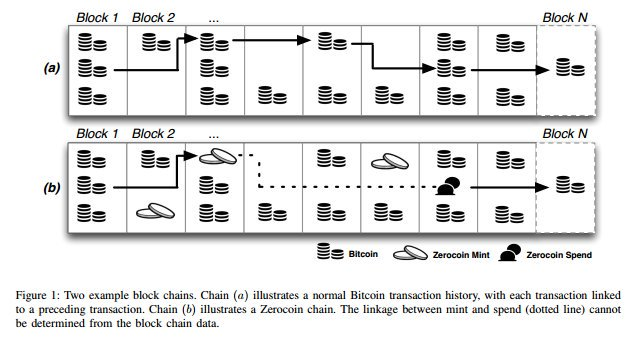 Sigma is a privacy protocol that works very similarly to Zerocoin but it has some great advantages over it. While it doesn’t require a trusted setup, its proof sizes are far smaller as compared to Zerocoin (1.5 kB with Sigma)

However, the only weaknesses of Sigma are that it still requires fixed denominations. But this will be overcome in the upcoming protocol Lelantus which is in its early stages of code audit.

With Zcoin’s RAP (Receiver Address Privacy) one can hide details of the sender of the funds. The major advantage of RAP over stealth addresses is that the payments are very indistinguishable. Also, it supports light wallets, unlike Monero.

Like Monero, Zcoin is also very suitable for trade finance. Like other crypto assets, Zcoin can be used to transfer value across the globe by instant, cheap, and highly convenient transactions.

In spite of being a later entrant in the privacy space as compared to Monero, it has seen wider adoption. Moreover, Zcoin claims it is the first cryptocurrency that has become available to 5 million merchants in Thailand registered with the Thai QR code system.

Here is the comparison of XMR (Monero) and XZC (Zcoin) on the basis of price, market cap, and available supply. As can be seen, the market cap of Monero is almost 3x that of Zcoin. And in the last 24 hours, Monero has gained 2.00556% while Zcoin has lost -1.91391% in price.

Here is the price history comparison between Monero and Zcoin 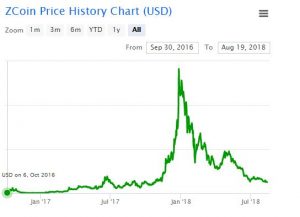 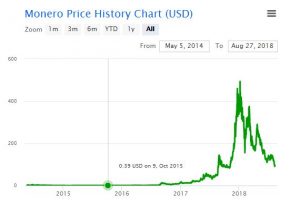 This is the trading history comparison between Monero and Zcoin 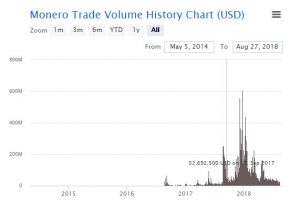 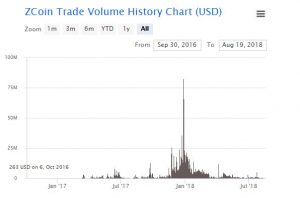 Here is the price prediction comparison between Monero and Zcoin 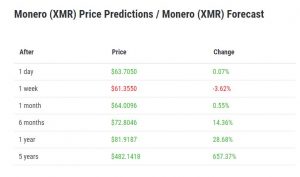 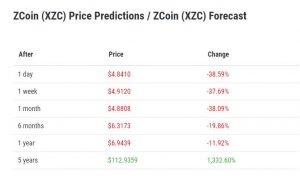 That a lot of information and we believe it gave you a pretty clear picture of how Monero and Zcoin are competitively placed. However, there is another aspect of their co-existence. While both the projects are keeping their competitive hats on, they are also inspiring each other.

In late 2019 at Invest: Asia 2019, Zcoin revealed that Monero was considering the use of its upcoming Lelantus protocol for its high-grade privacy performance. On the same lines, Zcoin launched a crowdfunding funding project similar to Monero CSS.

And that is what healthy competitors do, they feed each other’s growth. However, both projects have their own niche specialization. While Zcoin has seen more adoption, Monero enjoys a good price, higher visibility, and more followership. As can be seen in the price prediction graphs, Zcoin is a long shot project (give it 5 years) but if you are looking at pocketing some quick bucks, Monero should be your pick. 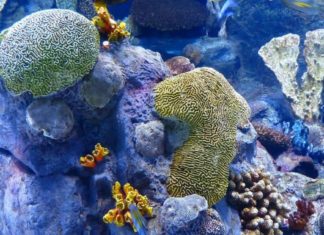 Reef Finance To Partner With Binance

David Abel - December 16, 2020 0
Reef Finance recently announced its intended partnership with Binance Access. Reef is the very first cross-chain DeFi operating system that has been built on the...