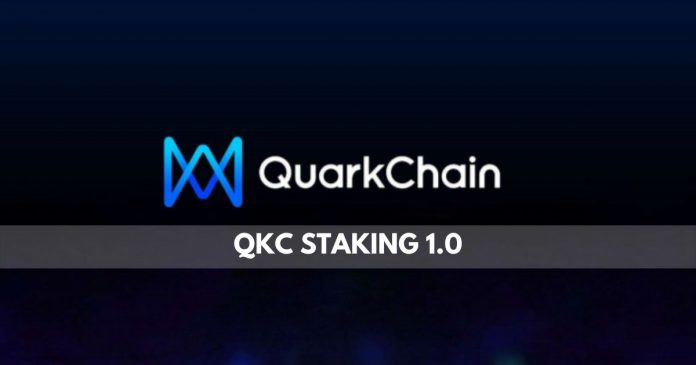 QuarkChain has announced the official launch of its Staking 1.0. With it, Miners can now easily find staked QKC while QKC holders will earn better interest.

Alongside the above-listed benefits, QuarkChain Staking 1.0 will also facilitate flexibility on the platform with its “heterogeneous sharding technology”. QuarkChain Proof of Staked Work (PoSW) currently serves as the foundation for a revolutionary DeFi system. The PoSW algorithm makes use of a division-and-cooperation mechanism. One that sees both miners and holders working together to facilitate efficient mining and thereafter share the proceeds.

Notably unlike the popular PoS method which suffers from a high inflation rate, PoSW simply requires miners to compete with hash power.

Currently, the total amount of QKC available for mining is 4 billion, and about 245 million has already been mined in the first year. Plans are, however, in place to fix the current annual mining rate to about 88% of the previous year. This, in essence, implies that the total token generated by PoSW algorithm will be much lower than of the POS algorithm

We proudly introduce QuarkChain Staking 1.0, which offers a way for miners to find the staked QKC tokens and the QKC holders to get extra income. From now on, miners and token holders can work together on mining efficiently and share the profit afterward! https://t.co/teuhnPoUhC

The PoSW algorithm is one that drastically reduces the difficulty attributed to mining by staking QKC tokens. Following the mainnet launch of QuarkChain mining function, miners and token holders have formed a partnership beneficial to both of them. Despite this innovative partnership, many token holders fall short of meeting the minimum requirement set by miners. Therefore preventing them from partaking in staking activities. QuarkChain Staking 1.0 smart contract launch will enable small and medium-sized token holders to participate together in QKC staking. This, in essence, will make it possible for more QKC holders to take part in staking and therefore easily earn more income.

The reward is based solely on the “efficiency difference between QuarkChain mainnet staking mining and non-deposit mining”. Miners provide mining equipment, they deploy contracts and also establish the earning share ratio. Token holders, on the other hand, get to choose contracts they deem credible and then transfer QKC tokens into the contract address.  The return ratio is usually negotiated and agreed upon by both parties.

The partnership between both parties is quite simple and very rewarding. Token holders are only concerned with locating officially verified contracts and QKC tokens on QuarkChain. Only QKC mainnet token is required throughout the entire staking process. Staking 1.0 is currently the first and only available version. However, plans are in place to ensure important improvements such as customization and matching functions are included.

Plans are also in motion to create DeFi in the near future with the eco-partners from different industrial spheres. These next-generation DeFi on QuarkChain will provide better efficiency, ease of use, and security. Find out more about QuarkChain building the next generation of DeFi Network here.