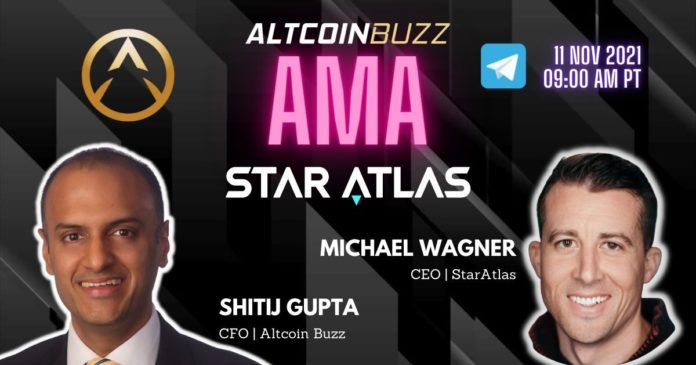 The CFO of Altcoin Buzz, Shitij Gupta, anchored the Star Atlas AMA session on our Telegram channel. He was joined by Michael Wagner, the CEO of Star Atlas. The AMA took place on November 11th, 2021.

Below is a recap of the Star Atlas AMA session with Michael Wagner to understand their planning.

Q – Thank you for joining. How are you today?

I’m great, thanks for having me.

Q – So tell us about your journey before Star Atlas, before we dive into Star Atlas. What were you doing, your vision and ideation plan behind Star Atlas before metaverse became the big rage?

The extended background in my formal career centered around capital markets, where I worked in investment analysis and portfolio management. I think many people know I hold my CFA charter, which is oriented mainly towards utilizing various financial models to determine the intrinsic value of assets. It is heavy in finance and economics.

However, I’ve been a gamer most of my life and have always enjoyed engineering systems, building my computers, and generally tinkering with electronics.

I was introduced to crypto in 2013 through scrypt coin mining, which I found enjoyable, though not profitable given my time of entry. Fortunately, the tech captivated my interest, and I essentially dedicated my life to discovering what I could and building within the ecosystem. Immediately before Star Atlas, I was primarily focused on my other company, Tokes, launched in 2016. Through the building of that company, I met Danny Floyd and Jacob Floyd, who went on to cofound Star Atlas with me.

The vision behind Star Atlas has always been ambitious, intended to operate at the intersection of AAA gaming and blockchain-based financial mechanics – so NFTs, native crypto assets, and DeFi.

We identified a gap in the existing blockchain games in that the caliber of the projects was most suitable for the developing crypto gaming community and not targeted at a mainstream audience.

Q – Now on to Star Atlas, let’s start with the chain. Apart from the apparent transaction speeds and cost-effectiveness, why Solana? And what do you think is behind the gaming Solana wave? Do you believe other chains such as AVAX or FTM take over the Solana momentum in gaming?

In my opinion, Solana is the only layer capable of serving web-scale applications in a web3 format. We first analyzed the tech behind the upcoming protocols at the time (mid-late 2020). Solana checked all of the boxes, to your point, across speed, scalability, network latency, and transaction cost.

We also considered the team behind each of these protocols. Anatoly and the cofounding team behind Solana all come from a deep pedigree in scalable tech, working with companies like Qualcomm, dropbox, etc. Their emphasis was on a building system architecture that could run in parallel, further lending to my confidence in the potential of Solana.

It also leads to creating their unique consensus algorithm, known as Proof of Time. A method of centrally controlling the network’s consensus on universal time but providing the capability for parallel transaction processing/consensus once all of the nodes agree on that time.

Beyond that, we also saw an opportunity to participate early on in the ecosystem, leading to a symbiotic relationship in which we could mutually benefit from the success of one another. We had the potential to bring a massive user base to Solana, and they were pivotal in driving the early awareness of Star Atlas.

And finally, Solana had an emphasis on being a DeFi centric protocol from the start. Given our desire to integrate a number of these financial primitives into our game, innovation across Solana would lead to greater opportunities for our players. And in hindsight, it has been a fantastic choice, given the growth and interest in building on Solana.

Q – Tell us more about the Star Atlas storyline. How are you building it, and what are the primary objectives of the game?

Star Atlas is set in the year 2620, extending from our real human timeline. It is a virtual universe initially centered around space exploration, territory control, and political strategy. A grand strategy MMO and metaverse.

We are building the fully immersive world in Unreal Engine 5, which will provide a hyper-realistic, cinematic quality gaming experience. This is important when looking towards the future and through the emergence of the metaverse, in which these new citizens can enter Star Atlas with a variety of motivations.

There will be gamers, but people will seek social experiences (concerts, art galleries, hangouts). I also genuinely believe the metaverse will completely disrupt social media and eCommerce. Digital shopping in AR/VR is a lot more enjoyable than shopping on Amazon. It is at this point that we begin blurring the lines between physical reality and digital life.

And the core pillar that supports all of that is a fully functional, open economy, only possible with the integration of decentralized networks (i.e., blockchain) and crypto-assets.

Q – What about the NFT sales happening right now on the platform. How can the community gain from buying ships? Will these ships have in-game utility when the game launches? Are you guys also venturing into land sales?

Absolutely. We are currently in the early stages of game asset sales, the Galactic Asset Offering, or GAO.

This is in preparation for launching the initial ‘minigame’ features, which we are delivering in-browser. Notably, SCORE, which stands for Ship Commissions on Remote Expeditions, is scheduled for release in the coming weeks. SCORE will be the first opportunity for players to deploy/enlist their ships to their faction and start earning rewards in ATLAS. The gameplay centers on resource management of food, fuel, armor/repair, and ammunition.

We have a great roadmap document we released that speaks to the broad development pipeline we are working on.

You will note that mining and farming operations are next in our pipeline. As we get closer to developing those gameplay mechanics, we will open up land sales.

I’d also note that while we have an entire engineering team working on the blockchain logic and minigame development, we also have an entire production team currently working in UE5. We are targeting Q1 2022 for an initial modular release of the fully immersive world.

We call the first UE experience The Showroom. People will be blown away when they see their ships on a real scale in the universe. I’ve had the pleasure of sitting on our early demos, and this experience truly brings the assets to life, which is hard to capture in a 2D image gallery on the marketplace.

Q – I heard somewhere that you have a team of 200+ people. That is a large game studio already, and it’s rather impressive – so congratulations on the achievement. What are some of the core challenges that you are facing today? And where do you see this in the next five years?

Thank you. It has been an explosive year for us by every metric. The community growth is so inspiring. And yes, seeing the team grow to the size that it has so quickly is very encouraging. We are closer to 175 today (starting the year with four people). However, we are not slowing down on hiring, and I’d anticipate 500+ people by this time next year.

The primary challenge is simply in operating across multiple areas of emerging tech. While I have enormous confidence in Solana, it is still a beta protocol. Serum DEX is also in beta. And we are working on an early access version of UE5, which doesn’t have nearly the depth of documentation that earlier versions have.

So it is a lot of R&D and a lot of discovery, and it requires that we are dynamic in versatile in our development. In 5 years, we should have a large set of gameplay experiences across UE, web, and mobile.

And I’m looking forward to the decentralization of the metaverse through the Star Atlas DAO (POLIS) over the coming years. Governors will see themselves more and more empowered to influence the direction of Star Atlas as time progresses. It was going to be an exciting couple of years, to be sure.

There will be awards of $500 in USDT and two NFTs for the best two questions.

Q. Twitter – The thing that I would like to understand is ship burning because people are scared about this in the guild. I heard from you that you would introduce an insurance contract; could you tell me something about this so I can also explain it better to the Italian community?

Ship destruction is a real thing. We call it Play for Keys. However, it is entirely optional to enter into the high-risk zone in the game, so you won’t be exposed to it if you don’t have a desire to. High risk, high reward. All of the best loot, rarest materials, and highest economic value will exist in deep space.

And while we won’t be building the insurance protocol, there are many teams currently working on this, and we will be looking to integrate them at a suitable time.

Q. Twitter – Given the vastness and complexity of the Star Atlas ecosystem, what is your plan to stay ahead of the competition that’s sure to come?

Scale, grow and don’t let up.

Q – There is so much excitement about this project in the crypto community that I can’t even believe it. My questions relate to this only “What Are Star Atlas preparations for the mass adoption of the game, and will this affect users’ playing experience/gameplay by any chance?”

It’s going to be interesting to see it evolve. To my earlier point, we rely on many pieces of emerging tech, such as Solana and Serum. There will undoubtedly be frustrations along the way, to be perfectly transparent. But I can confidently say that we have demonstrated our ability to solve problems and overcome obstacles, and we will only get more efficient at that over time.

Fortunately, we have an amazingly talented team of bright people working at Star Atlas, all passionate about bringing this vision to life. 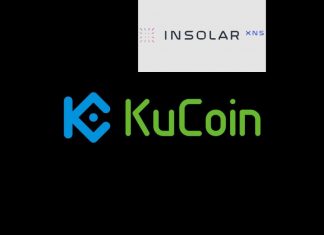