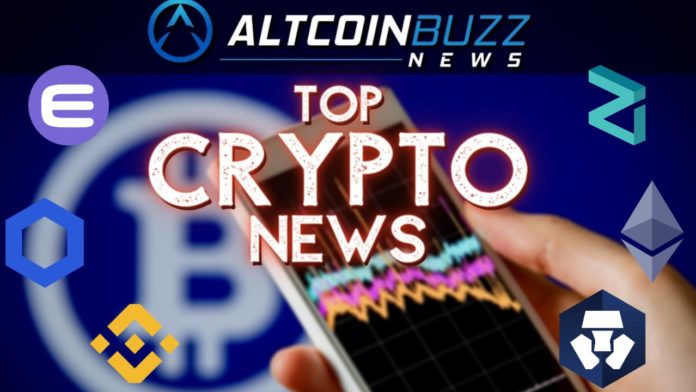 After undergoing a sharp correction, Bitcoin is now trading at $54,673. Meanwhile the second-largest cryptocurrency, Ethereum, is trading close to $1,703.

Let’s find out some interesting crypto news in detail.

Today, Crypto.com announced the availability of its virtual cards for European users. With this launch, users can enjoy lucrative offers such as 8% back on purchases. Users can apply for this virtual card through the Crypto.com app. Besides this, existing cardholders can now register and show QR codes at member lounges to enjoy LoungeKey access without carrying their physical cards. Primarily, these virtual cards are available for European, including the UK, users. However, the team has plans to launch this card for diversified markets in the near future.

Additionally, on the occasion of the upcoming Crypto.org Chain mainnet launch, the project has announced some key upcoming updates. These include on-chain NFT support, native coin issuance, execution of ETH-based smart contracts, bridging oracle protocols, and many more.

Juventus star Cristiano Ronaldo becomes the first soccer player to be rewarded in cryptocurrency. As per the report by Marca, Cristiano Ronaldo received 770 JUV fan tokens before a match against Benevento. Further, he was rewarded the fan tokens after scoring his record-breaking goal. The awarded tokens amount to worth over $11,000 as per the current price of $15.26 for each JUV. Moreover, JUV is the official fan token of Juventus, which was launched by the Italian football club on the Chiliz (CHZ) blockchain. These tokens empower fans with unique digital and real-life rewards and events through the Socios app. Recently, some of the biggest teams launched their fan tokens on the Chiliz blockchain, such as Manchester City, Barcelona, and AC Milan.

Japanese medical project Pracs accomplished phase 1 with IOST to introduce the Personal Health Record (PHR) on the blockchain. The goal of the project is to allow individuals to manage their own health information. As per the tweet, this project has achieved the first phase and strives to share this data with medical professionals while maintaining it as a health handbook on the blockchain. In addition, users can access their health-related information through a smartphone application, and users are given a private key. Later on, this data will get encrypted and stored on the server. Hence, this technology is tamper-proof and cannot be decrypted without a private key.

In the last bit of crypto news for today, we have Coreto partnering with Polygon (formerly Matic) to integrate Layer 2 solutions. Moreover, Coreto is a community-governed ecosystem that helps in the interaction between projects, investors, pools, traders, and much more. This alliance will facilitate transactions between the Polygon Layer 2 and the Coreto.io platform by integrating COR tokens into the Polygon Wallet. Further, this would solve the high gas fees issues of COR token transactions. Additionally, the team has plans to empower users by providing utmost security with low transaction fees along with the highest degree of decentralization.

Pratik - May 24, 2021 0
Solana is a fast, secure, and censorship resistant blockchain providing the open infrastructure required for global adoption. Solana is building the architecture of their blockchain...