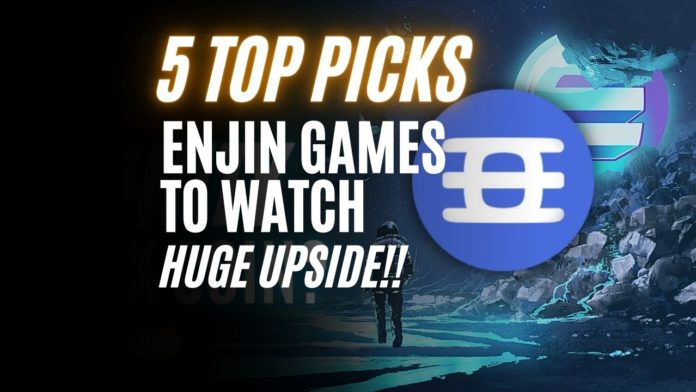 Enjin, the ERC-1155 NFT standard creator, has grown to become one of the largest game/app NFT networks in the world. The ecosystem is buzzing with over 250,000 gaming communities and 18.7 million registered gamers as Enjin offers the best NFT development tools in the space.

With the addition of Efinity, which is more like the Internet of NFTs, Enjin and its ecosystem is expected to witness the next round of explosive growth. $ENJ, the native token, has been up  1200% since the beginning of the year, and $EFI, the Efinity token, has been up 405% since its launch this year.

Are there any project tokens building on the Enjin ecosystem that hold such massive potential? When are they launching? How can you participate in them? In this article, you will discover that and more.

Kingdom Karnage is a virtual Trading Card Game where assets in the game are tokenized that are injected with Enjin Cryptocurrency and may be withdrawn as NFTs. The gaming platform brings the physical exchange of cards to the digital realm. It has a new-generation technology that makes this possible.

We like this game because you can collect and enjoy buying, selling, and trading digital cards with other players. Also, Kingdom Karnage has a vital ecosystem that includes characters, Campaigns, Dungeons, PvP, Card Rarities, and platforms.

Moreover, there are more than 20 reviews on the STEAM platform, a delightful game, simple to learn, and a fun NFT game. However, the game is still in an early stage, which means that things will get optimized.

On the other hand, users can buy different kinds of packs, bundles, features, and Gems in the marketplace. Nowadays, you can find standard, uncommon, and rare items from 5$ to $60. With these items, you will have more robust characters, and winning battles will be much higher. Also, users will win ENJ tokens for winning in competitions and rank in the Top 100.

How to get involved in Kingdom Karnage?

Anyone can get Kingdom Karnage in Steam and Android. You can also play it for the browser version. Now we understand that KK pays you for playing the game. There is another way to profit if you are not an avid gamer.

Moreover, the Top 25 players with the highest score will access the whitelist. Also, there will be 500 randomly selected players for a token airdrop that represents $5000.

Also, if you want to get involved in the project without playing it, you can participate in the IDO on GameFi Launchpad soon. So stay tuned to GameFi’s social media accounts to the official launch date.

Space Misfits is a play to earn a 3D Multiplayer Space Game powered by ENJIN Blockchain Technology where you can explore new worlds, compete for limited resources, expand your fleet, and make a fortune in space. This free-to-play game requires nothing more than a Windows PC to play.

In this game, users can take advantage of these features:

Players may earn BITS (in-game cash) by doing various tasks in the game. You may earn BITS by becoming a trader or hunting down NPCs. In the future, you’ll be able to trade your BITS into ERC20 tokens, which you may then sell on an exchange. You may now earn a variety of NFTs by playing Space Misfits, as well as in-game drops.

We took a look at their well-documented tutorial, and it seems Space Misfits has exciting gameplay to offer. In the marketplace, users can buy a different kinds of ships, turrets, components, and modules.

Here are some of the most significant partnerships of this Enjin p2e game:

On the other hand, the economy of Space misfits will have two in-game tokens: BITS and CROWN. $CROWN tokens are used to participate in the DAO, staking, and buying items in the marketplace. 40% of the $CROWN tokens will be used for staking.

Also, $BITS will be the game’s initial utility token, won through various proof-of-work gaming mechanisms. It’s important to mention that these tokens will live on the Harmony chain as HRC-20 tokens.

This EPIC event will take place IN-GAME for the first time ever!🎮

How to Participate in Space Misfits

There are two versions of the game available right now. First, a player can play it alone, which lets you explore space, mine asteroids, battle NPCs, build ships, repair/fuel them, and purchase minerals on the market.

In the second, you can battle against another player. (PvP) In the alpha version, players may progress by purchasing blueprints from the Space Misfits marketplace. Blueprint NFTs for Striker and Deathkiss are available for purchase. To start playing, you may download it.

Don’t forget to stay tuned to their Telegram and Discord for the official launch. In January 2022, Seedify will host the IGO for Space Misfits.

9Lives Arena is a competitive online role-playing game that focuses on 1v1 PvP battles. This enjin p2e game is the first game to feature ‘Ooogy,’ your little assistant that mines gather resources and crafts for you whether you’re online or offline.

9 Lives Arena offers very rarely limited edition item blueprints in the store on the blockchain, ERC1155 tokens that you can move those NFTs in other games. Moreover, in the platform, there are five essential features to mention:

On the other hand, nine lives Arena gives users an excellent way to monetize their efforts. To make a limitless number of products using blueprints like Fortnite’s skins represented as NFTs.

Right now, there is a blueprint presale where the platform provides a diverse selection of products, including early access during Alpha and Beta. If you want to know when you’ll be able to play it, join the early access (1) and stay tuned to its Twitter account to know when it will get live. There are six kinds of blueprints:

"For @9LivesArena, #Efinity is the one missing piece of that allows us to create an NFT-based in-game economy like no other.

Seamless, elegant integration that is inviting and feels natural for gamers to get involved in without any prior experience."https://t.co/9BI3Z0NVFy pic.twitter.com/cFotWcRlqN

How to Participate in 9 Lives Arena?

9Lives Arena is an online game in closed alpha, with an open alpha, beta, and full release to follow. As an online game, it will continue expanding and getting updates beyond its initial release.

On the shop section, we provide one-of-a-kind founder packages. Once you have purchased any Founder Pack 3 and above, you will be given a download link for closed alpha. Nowadays, the game is only available for PC, and there are plans to launch it on consoles

Age of Rust is a first-person action-adventure puzzle game set in a dark sci-fi future when artificial intelligence has seized control of the galaxy. In this game, users can explore many locales, look for clues, and solve challenging puzzles to discover the path ahead.

What we like about the game is that Age of Rust is that cards can unlock special in-game items. Also, it’s essential to mention that this game supports a list of tokens in the Enjin multiverse.

Rustbits is the official token for Age of Rust and has the following use cases:

Also, there is a “Gold Card” token which is the last light and origin card. The Origin card is the community founder token and unlocks all future games and the game tokens for Age of Rust.

Moreover, the gold tokens grant access to a unique Discord channel where you may see early images, developer information, and other game-related information.

"You'll find your future, it just might not be the future you were hoping to find" 🗝️🏴‍☠️🎮#NFTGame #enjin #blockchaingaming pic.twitter.com/NVvaJSVCFJ

How to Participate in the Age of Rust

To participate in Age of Rust, you have to buy the game, including Season 1, 2, and 3, by spending Rustbits. However, a free beta playtest doesn’t require any token to play it. If you have an Enjin AoR NFT, you can access the early beta.

According to the roadmap, the Beta of Season 1 was available in Q2-2021. Also, the final version of the game (Season 1 and 2) will be released in 2022. Finally, you need to link your Enjin wallet to the game to play this game.

Hololoot is the first augmented reality (AR) metaverse with an NFT generator marketplace. That means you can generate an NFT while you achieve milestones in the game. This AR solution can be used to create AR NFTs from any compatible 3D model, creating a beautiful artist’s AR NFTs. 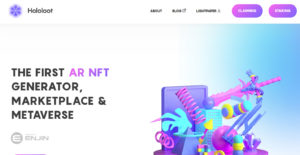 Holollot has colossal potential because AR NFTs are a new category, whereas nowadays, creators don’t have a scalable solution to create this kind of NFTs. Therefore, according to its whitepaper, Hololoot uses a specialized AR tech to create a no-code AR NFT generator and marketplace, unlocking significant commission revenues.

On the other hand, the only company developing AR NFTs is VeVe, making handcrafted collectibles. However, it would be tough to duplicate Hololoot’s software, requiring many months of work. Also, the platform will create its NFT, which is connected to the Enjin X marketplace.

According to the roadmap, the most significant milestone on the way is the Alpha Version of the game that is set to be released somewhere in Q2 of 2022 is the expansion of the Advisory Board.

On the other hand, $HOL is the native token of Hololoot where users can create and support the sustainability of the ecosystem for AR NFTs and sustain the token liquidity in its development. It’s important to say that this token has a burn mechanism. It has the following use cases:

The rate is calculated dynamically – when it needs stakers, the APR goes up 📈

Check the stake pools for the current APR 👇https://t.co/JFqx1sVaWA pic.twitter.com/s5M9zXRhWx

You can start playing this game by downloading the game (mobile version), which will be live in 2022. Then, you can create and buy AR NFTs from the cloud. Finally, users can interact with your NFTs. 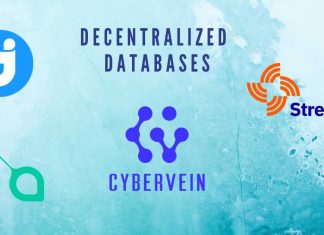 Deepika Garg - June 15, 2020 0
We have come a long way since the times of a single database model to a cloud-based centralized database. This change has enhanced the...

9 Benefits of Blockchain in The Healthcare Sector