Ethereum and XRP have been competing for the second place since the 4th quarter of 2018. For a long period of time, XRP had the upper hand. A bullish sentiment surrounding the Constantinople Upgrade is now pushing Ethereum back into the second position.

XRP has been quite bullish since October last year, when Ripple officially launched xRapid. Since then, both XRP and Ethereum several times claimed and lost the second position. As can be seen above, Ethereum is now ahead of XRP with over $200 million with a token price of $121 per ETH.

It seems Ethereum is turning bullish again because of the long-awaited Constantinople upgrade, which is scheduled for the 27th of February. Constantinople is one of Ethereum’s largest upgrades to date and will change the infrastructure of the Ethereum blockchain.

The Constantinople upgrade aims at increasing the efficiency of the Ethereum blockchain while decreasing the mining rewards from 3 ETH to 2 ETH per block. This, of course, has a huge impact on the mining business, making it less profitable to mine Ethereum for miners.

It has to be seen if Ethereum can hold the second spot. The last two times, XRP took back the position within a few days time. 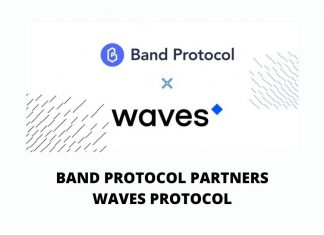 David Abel - July 20, 2020 0
Band Protocol has announced its strategic partnership with Waves Protocol. Both Band protocol and Waves protocol will work together to promote decentralized and customizable oracles. https://twitter.com/BandProtocol/status/1280803895220920321 Promoting...