American cryptocurrency exchange Coinbase announced on June 11 that they would soon support Ethereum Classic (ETC) on their platform. Although an exact date had not been communicated, the price of Ethereum Classic jumped over 25 percent after the announcement. After more than a month of no news, people are waiting eagerly for more clarity around the listing. Will Ethereum Classic be added soon?

The news on June 11 slightly came as a surprise. The question around Coinbase finally adding more cryptocurreny to their platform has been a hot topic for almost a year now. During and after the big bull run of December 2017, and with the rise and increasing popularity of exchanges like Binance, a lot of crypto enthusiasts were wondering when Coinbase would expand its cryptocurrency offering. Up till now, Coinbase only offers support for four different assets; Bitcoin (BTC), Bitcoin Cash (BCH), ETH, and Litecoin (LTC).

The general expectation has been that the listing will happen in a few months. That said, a tweet by Coinbase already indicated that Ethereum Classic might be on Coinbase sooner than most people have been expecting. On July 13, while unveiling a list of five others cryptos that Coinbase might plan to list in the future, Coinbase said something to the effect that integrating Ethereum Classic (ETC) has been quite easy, since it is very similar to Ethereum (ETH).

Unlike Ethereum Classic, which is technically similar to Ethereum, these assets require additional work that necessitates contact with many external parties. To ensure that this news comes to you directly from us, we are publicly announcing our intentions.

Furthermore, when Coinbase announced the Ethereum Classic listing, they said the following:

“[W]e will now begin the engineering work (Step 4) for supporting Ethereum Classic. As part of this process, customers can expect to see public-facing APIs and other signs that the asset is being added. When we reach the final testing phase of the technical integration, which we expect to occur over the next few months, we will publicly announce a launch date for trading via our blog and Twitter (Step 5).”

Coinbase states that customers “can expect to see APIs and other signs that the asset is being added”, and yesterday a screenshot revealed that Ethereum Classic has already been added to CoinBase Custody! 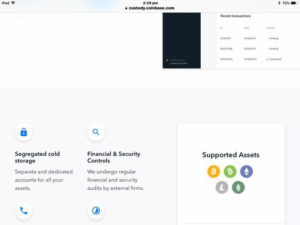 This is a big SIGN that the official listing of Ethereum Classic is on its way! Coinbase Custody is a service which provides secure storage for crypto-assets for eligible financial institutions and hedge funds across the world. The service has officially accepted its very first deposit and it is now live for investors in the US and Europe.

In addition to Ethereum Classic being available on Coinbase Custody, according to the Coinbase support page system maintenance has been done yesterday.

“We are performing scheduled maintenance on Thursday, 26 July at 8pm PT. For 1 hour, customers will not be able to generate new crypto addresses or send funds off site. Any sends attempted during this window will be processed once maintenance is complete.”