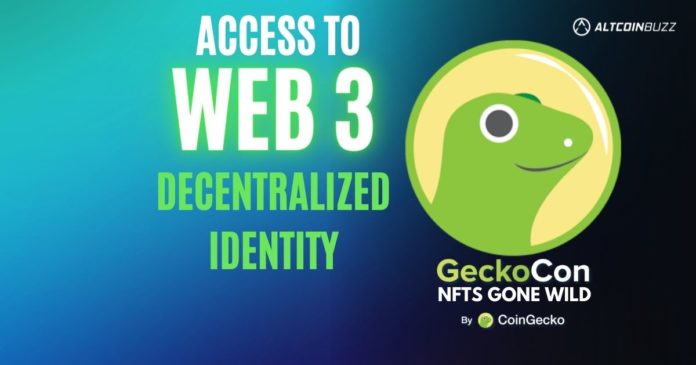 Here is the session called “Decentralized Identity: Access to Web3”. This occurred on the second day of the conference, Friday 15th at 3:00 PM (EST), where we had Alexandra Kons Editor in Chief at BeInCrypto as the host.

The session discussed the topic of decentralized identification, the current state, and the role it will play in Web3. The speakers are:

The Current State of Web3 and Drivers

First, Alexandra the host of the discussion opened up the session. She asked the panelists about the current state of Web3 and their motivation. Harry mentioned the ability to aggregate everything and bring data back to users so that they own their data. Kerman spoke about reducing the cost of trust. Naturally, with an open-source data layer, you can minimize the time to trust. In addition, the amount of energy needed to build trust in communities could also be minimized.

Harry felt terms like Web3 and Metaverse are buzzwords. He touched on the current issues of Web3: Issues like scalability, security, and the need for improvement. He suggested, that if addressed, productivity can improve. Kerman was less concerned about technology because he felt social issues around Web3 needed solutions.

Then, Kerman felt a lot more realism needs to be in the space. We should ask harder questions like why does the metaverse matter?

The State of Digital Identity Now and in 10 Years

The discussion moved towards digital identity. Kerman gave his views first. He felt that digital identity exists today. Twitter’s native NFT support for PFPs is such an example. ENS domains are also handled to one’s identity. However, these are not programmatically enforced.

Then, 10 years from now there is a possibility of one coherent decentralized identity. Where everything could be on-chain. This could include social behavior and contributions as well as skills and credentials. In addition, Kerman added that we need to align on definitions. Once aligned, we need to decide which definitions add value.

Then, Harry responded by saying identity has 2 parts:

This could include your likes, your behavior, your background, and your achievements. A digital identity would map everything together. Allowing you to identify yourself everywhere and preferably securely and privately. In 10 years he sees it as an aggregated data layer that users own and applications ask for access to.

The Importance of a Decentralized Digital Identity Ownership

Right now companies like Google, Tik Tok, and Facebook have control over user data. They are monetizing from user behavior and user data identity. Therefore, Harry went on to say users can choose if they want to monetize their data. Users can choose whether they want to grant access to others.

Then, he gave an example of sharing between applications. If a user wanted to give Apple Music data to Spotify to improve the user experience on Spotify this is not possible. Currently, user data is not owned by users and is something that needs improvement.

Both Harry and Kerman gave their views on this. Moreover, Harry brought up the point that technology is still quite far behind. There is a lot of work to do in that space. We need an easy way to store private identity data securely.

Then, Kerman insisted on the need to make better products. In other words, the need to make something people care about that adds value to them. Kerman added data is fundamentally very precious but fundamentally is a tool. It is up to Web3 creators to make it a lot better. Here is an example of decentralized identity:

We are proud to announce that MBuddy, the Web 3.0+ identity service is now available to all Web 3.0 projects!

Check out the MBuddy Portal now to explore all the Spaces! You will have a chance to win a free NFT!
👉https://t.co/L0XgKbrfgF

Harry mentioned how he liked blockchain technology. The fact it is permissionless. Creators of products and tools can build on top of each other based on their protocol based on allowed user data. But he also stressed centralized parties could slow down adoption.

As it may affect their revenue and growth. He cannot see companies like Facebook or Google initiating such a process. However, the government is tackling privacy issues. The government is pushing toward are more competitive landscape.

Data in the Web3 World

In addition, the discussion progressed towards data in Web3. Harry expanded on his point around ownership of data. In his view, data in Web3 lets users securely share their information. It also lets users share the amount of information that they desire. This would mean that users own and control the data that they share.

Then, Kerman added that physical and digital blend seamlessly if a digital identifier existed. He went on to say users would not have to share everything. Moreover, the government may ask for KYC based on local regulations. Centralized applications would have to comply with users and what they were willing to share.

Your #web3 digital identity travels with you!

It's your wallet, healthcare data, education records, and more.

In the future, it is going to be much more important than today.

It will be used in all sorts of apps we can’t even imagine now.@unstoppableweb @PartnerWithUD pic.twitter.com/7xLqB4Ode1

Finally, Alexandra finished the discussion by imagining a Web3 data-driven world where users are in control. Simple tasks like remembering passwords would be a thing of the past. Privacy and data control would be in the user’s hands. Eventually, users could share segments of their data as they were in control. However for this vision to come to fruition we require a concerted effort from all parties to make this shift.

Lawrence Mike Woriji - January 28, 2022 0
The Sandbox is leading the way to greater metaverse adoption. The platform, a subsidiary of Animoca Brands, recently announced a new partnership with the...

B26 Finance – Highway to Financial Freedom With Self-Banking