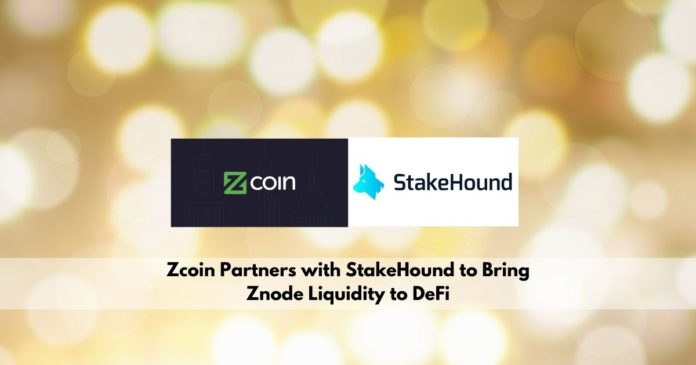 Privacy-focused cryptocurrency Zcoin has entered into a strategic partnership with StakeHound.

The partnership will bring the liquidity of Zcoin’s Znodes to the DeFi space. This is exciting news as Zcoin (XZC) will be the first-ever crypto asset to go live on the StakeHound platform. XZC is currently available to users on the Ropsten testnet, but it will officially be launched this October.

Prior to this announcement, the Zcoin team have been researching on ways to create more use cases for XZC. One major area they looked into was integrating the crypto with DeFi. Thereby, making it possible for Zcoin (XZC) to be employed as loan collateral and, subsequently, creating better awareness and liquidity for the crypto. With this in mind, the partnership with StakeHound brings to life this initiative.

Zcoin’s Znodes are an integral aspect of the Zcoin ecosystem by providing top-notch security to the privacy-focused ecosystem. However, Znodes suffer from a major drawback as it locks a fair amount of Zcoin. All XZC locked in Znodes were inaccessible and therefore remained illiquid.  Also, with a benchmark of 1000 XZC, small scale XZC holders were unable to earn rewards on their holdings.

However, this strategic partnership with StakeHound will proffer solutions to these drawbacks. A major way to achieve this is by representing XZC as an ERC-20 token on the popular Ethereum blockchain. The partnership will facilitate fractional trading of Znodes and also furnish users with benefits associated with integrating with the DeFi space.

Zcoin is proud to be the first supported asset on the StakeHound @stakedTokens platform that unlocks liquidity in Znodes and bridges us into the DeFi ecosystem.

Below is a step-by-step representation of how to create staked XZC.

First, interested users will need to send Zcoin (XZC) to the StakeHound platform. StakeHound then sends it to a custodian.

Next, StakeHound sends back an equal amount of XZC to the user but this time as ERC-20 tokens. XZC ERC-20 tokens can easily be traded or transferred on popular DeFi platforms like Uniswap and Aave.

Finally, StakeHound safely locks the native XZC tokens in Znodes and then distributes the rewards daily to users with staked XZC. Amazingly, though locked in Znodes, staked XZC can also still be traded to earn Znode rewards.

Below is a graphical representation of how XZC can be traded on popular DEX platform Uniswap. 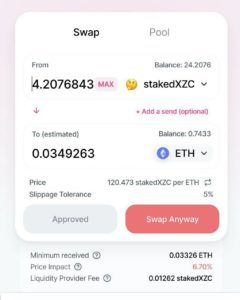 New and exciting updates are expected with regards to staking XZC in the coming weeks. Users should expect an in-depth guide on how to use staked XZC as well as the importance of the partnership with StakeHound.

Although this is a major move into the DeFi space, Zcoin reiterated its commitment to privacy in a blog post. The blog post disclosed that “Zcoin’s primary goal to provide the highest level of practical privacy remains unchanged.” The partnership with StakeHound is a way to increase the value, liquidity, and utility of Zcoin (XZC).

In a recent video on the Altcoin Buzz YouTube channel, we listed Zcoin as one of the DeFi coins to look out for.